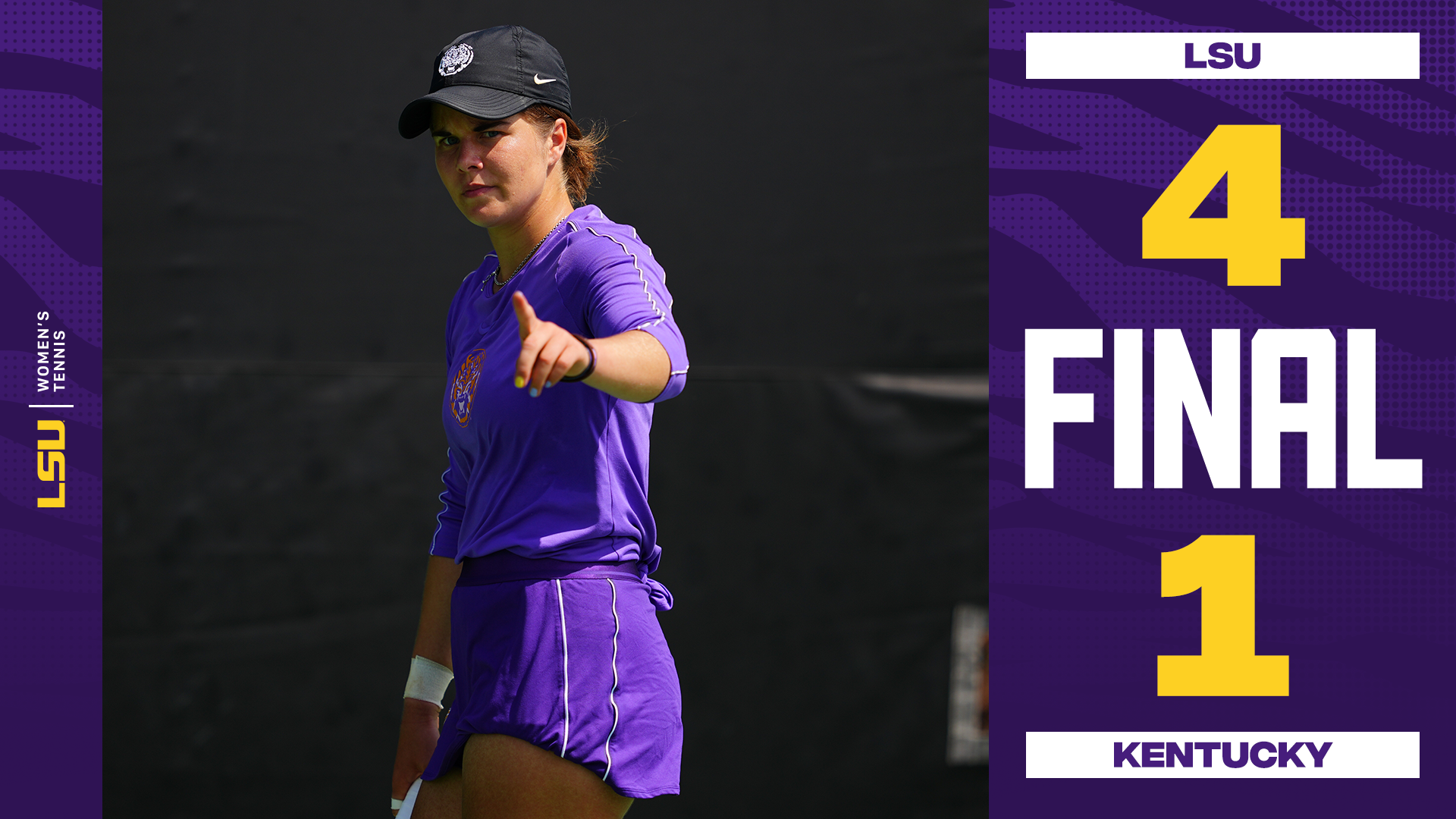 Selling Points
“Tremendous start in doubles,” co-head coach Michael Sell said. “We loved the energy, commitment, and execution we are showing to play at a high level in doubles. Once again, we’re showing tremendous strength in singles play at the top of our lineup from Safiya (Carrington) and Nina (Geissler), as well from Rania (Azziz) and her terrific win at No. 6.”

“Mia and Ena are true competitors and put themselves in winning positions today. We’re continuing to get healthier and we’re starting to build some momentum. We’ll enjoy this win and start getting ready for Sunday’s match against Vanderbilt.”

Doubles Results
Taylor Bridges and Safiya Carrington set the tone in doubles play as they made quick work of Ellie Eades and Carla Girbau at the No. 2 doubles spot with a dominant 6-1 win.

The duo of Ena Babic and Maggie Cubitt clinched LSU’s third straight doubles point with a win at the No. 1 over Fiona Arrese and Lidia Gonzalez. Babic and Cubitt stormed out to an early lead and held off a late charge from the Wildcat duo as they won 6-4 to give the Tigers the 1-0 lead heading into singles play.

Singles Results
Rania Azziz was the first off the singles court after a strong straight set win over Eades. Azziz claimed the first set by a score of 6-1 and kept her momentum going into the second, where she once again only dropped one game to win 6-1 and make it 2-0 on the afternoon to the Tigers.

Kentucky grabbed one back at the No. 4 spot, where Arrese defeated Bridges by a tight 6-4 in the first set before claiming the second 6-0.

LSU’s lead was extended to 3-1 as Carrington defeated Carlota Molino in straight sets at the No. 1. Molino stormed to an early 4-1 lead in the first set, but had her momentum swept from under her as Carrington won five straight games to claim the first set 6-4. Carrington stayed the course in the second set on her way to a 6-2 win, her team-high ninth of the season.

Nina Geissler clinched the match for the Tigers with a straight set win at the No. 2 spot over Girbau. The first set was all Geissler as she only dropped one game in a 6-1 performance. The second set was a back-and-forth affair between her and Girbau, requiring a tiebreaker at 6-6 to decide the set. Geissler took the early lead in the tiebreaker and did not look back as she won 7-2 to secure her court and LSU’s second SEC win of the year.

Up Next
The Tigers host the Vanderbilt Commodores at 11 a.m. CT on Sunday, March 20th.