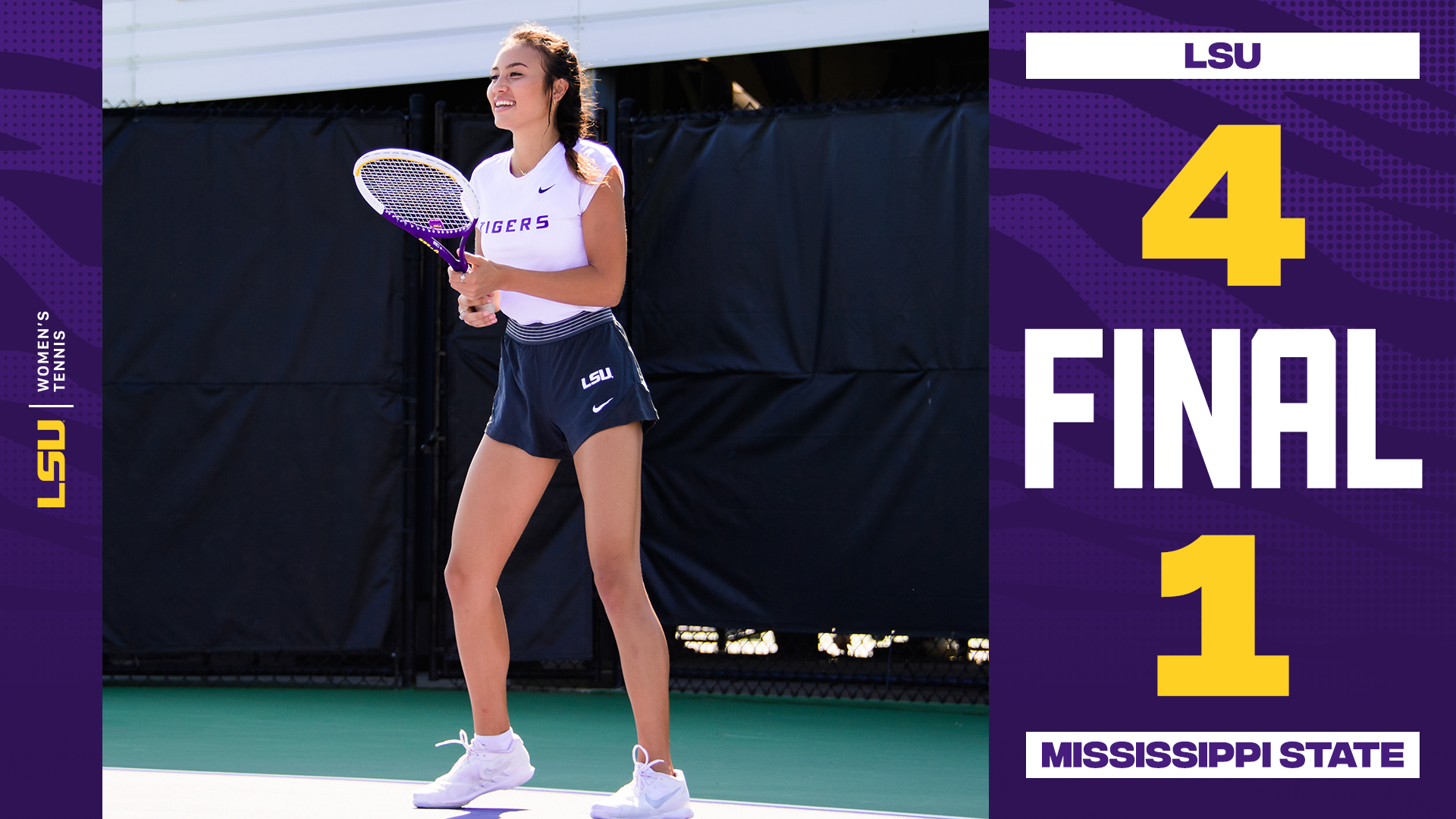 Starkville, Miss.  – The LSU women’s tennis team (2-7, 1-3 SEC) claimed their first SEC win of the season as they defeated the Mississippi State Bulldogs (8-7, 0-4 SEC) by a score of 4-1 on Sunday afternoon at the A.J. Pitts Tennis Centre.

Selling Points
“Herculean effort and resilience by the Tigers to get a quality road win,” co-head coach Michael Sell said. “We have been through so much adversity this season but this team is one of the toughest I’ve ever coached. We’ve preached about how deep in quality our team is, but Nina (Geissler) and Safiya (Carrington) played high level tennis at the top of our lineup and they led the line for us today.”

“Taylor (Bridges) showed how physical and tough she is to come from behind a set to clinch the match in dominant style. Our doubles performance in both matches this weekend shows how much progress we have made and the momentum it gives us going into singles. We need to use this win to build our momentum heading into Friday’s home match, but overall, we’re so proud of the desire and determination this team showed.”

Doubles Results
Ena Babic and Maggie Cubitt were the first off the doubles court as they claimed a 6-3 win over Emma Antonaki and Marta Falceto at the No. 2 doubles spot.

The Tigers clinched the doubles point for the second consecutive match when the tandem of Nina Geissler and Mia Rabinowitz defeated Magda Adaloglou and Alessia Tagliente by a score of 6-3 at the No. 3.

Singles Results
Mississippi State grabbed the first singles point of the afternoon and made it 1-1 at the No. 6 singles, where Tagliente defeated Rania Azziz 6-0 in the first set before Azziz retired due to injury.

LSU reclaimed after Geissler defeated doubles foe Adaloglou in straight sets at the No. 2. Geissler edged Adaloglou in a back and forth first set by a score of 7-5 before dominating the second with a 6-0 score to get her second SEC singles win of the season.

Safiya Carrington claimed her first SEC win of the season at the No. 1 spot to make it 3-1 after defeating No. 94 Antonaki in three sets. Carrington claimed the first set by a score of 6-3 before Antonaki responded with a strong 6-1 win of her own in the second set to force a third. Carrington recovered from her second set defeat and emphatically defeated Antonaki by a score of 6-0 to secure her first ranked win of the season.

The match was clinched at the No. 4, where Taylor Bridges completed a come-from-behind effort over Chloe Cirotte. Cirotte started well and won the first set 6-2, but momentum quickly flipped as Bridges played a strong second set enroute to a 6-2 win. The third set saw Bridges maintain control throughout the match as she won 6-2 to claim her fifth singles win of the year and secure LSU’s first SEC win of the season.

Up Next
The Tigers return to the LSU Tennis Complex as they host Kentucky at 11 a.m. CT on Friday, March 18th.