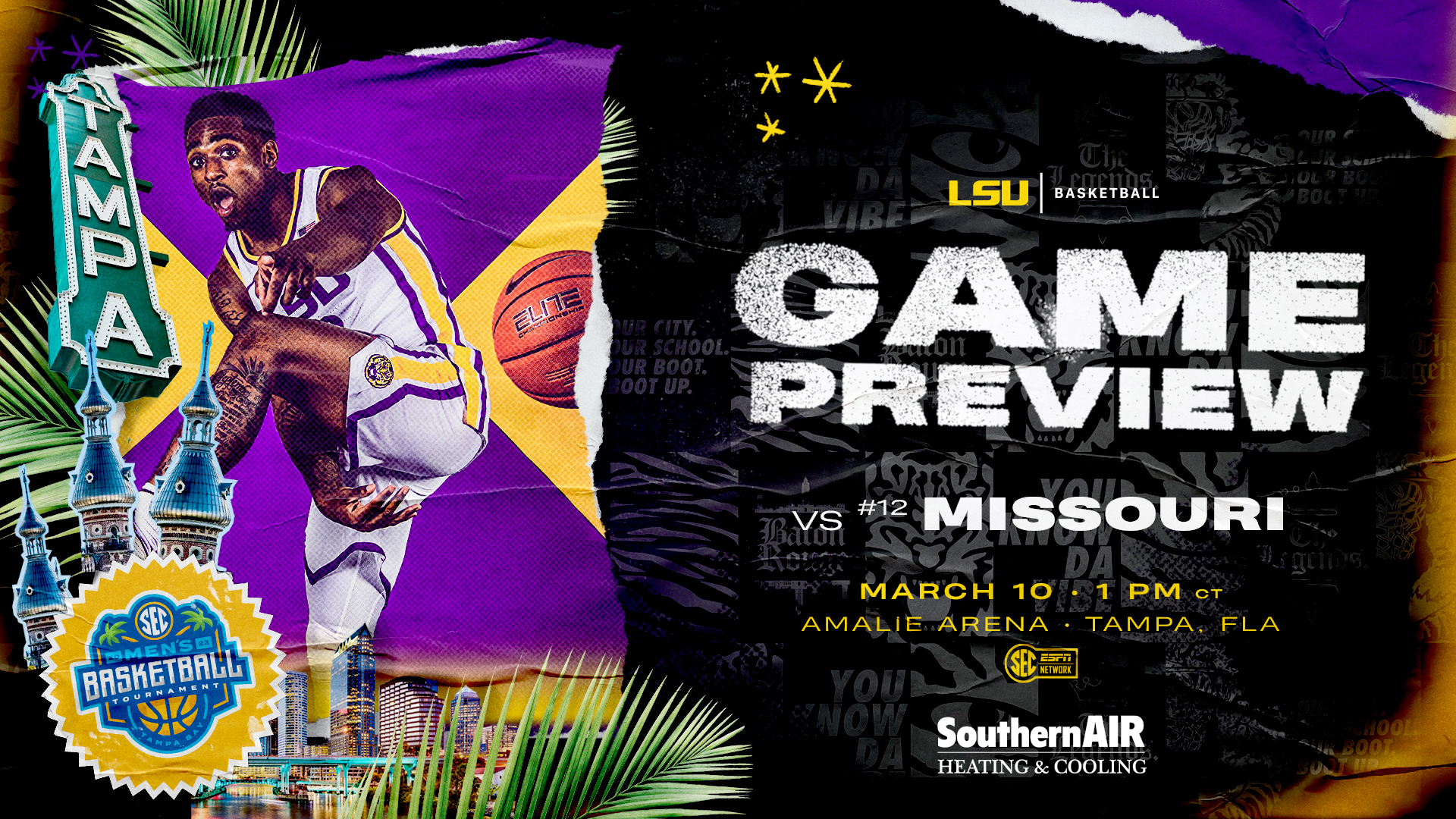 TAMPA, Florida – The LSU men’s basketball went through a couple of workouts Wednesday in preparation for their opening second-round game here Thursday afternoon in the 2022 Southeastern Conference Tournament.

The Tigers, 21-10 overall and the fifth seed with a 9-9 record, will meet Missouri in the second game of the afternoon on Thursday (scheduled for 25 minutes after the conclusion of the Noon ET/11 a.m. CT first game) at Amalie Arena.

The game will be broadcast on the affiliates of the LSU Sports Radio Network with the Voice of the Tigers Chris Blair and former LSU head coach John Brady (Guaranty Media flagship affiliate Eagle 98.1 FM in Baton Rouge) and telecast on the SEC Network with Karl Ravech, Jimmy Dykes and Marty Smith.

Ole Miss and Missouri met on Wednesday night in the first round of the tournament with Missouri exploding in the second half for a 72-60 win.

LSU practiced mid-morning at the USF practice facility for 90 minutes going over plays and both 5-on-0 and 5-on-5 work during the course of the session. The team then went over for its assigned 40-minute session on the game court at Amalie Arena to get some shots up and get used to the building.

The Tigers advanced through to the championship game with wins over Ole Miss and Arkansas before falling to Alabama, 80-79, in last year’s championship game. Coach Will Wade is 2-2 in SEC Tournament games.

LSU’s last five games in the SEC Tournament have been decided by a total of 17 combined points: losing by three to Miss. State in 2018 and to Florida in 2019 and then a 3-point win vs. Ole Miss, a 7-point win vs. Arkansas and a 1-point loss to Alabama last year.

The Tigers are the only SEC team to earn a top five seeding in each of the last five seasons (including 2020 leading into the eventually canceled event). LSU is tied for second in most SEC regular season wins in the last four years with 48.

The Tournament is returning to the home of the three-time overall and two-time defending Stanley Cup Champion Tampa Bay Lightning of the National Hockey League. This is the second time at this venue and the third time overall the tournament has been conducted in the state of Florida.

The Arena was known as the St. Pete Times Forum in 2009 when the tournament was held here last. LSU was the conference champion and the West’s No. 1 seed that year, winning in the quarterfinals, 67-58, over Kentucky, before losing to Mississippi State, 67-57, in the semifinals.

The Bulldogs won four games in four days to capture the championship.

The 1990 event was the other SEC Tournament held in Florida at the Orlando Arena in Orlando.

LSU has a 49-60 record in 61 tournament appearances and has won its first game played 31 times in tournament history. The Tigers lone SEC Tournament victory was in 1980.

LSU is expected to go with its standard pre-and-post injury period starting lineup that is 19-3 on the year with Xavier Pinson and All-SEC Freshman Team member Brandon Murray at guards, Mwani Wilkinson and Second Team All-SEC selection Darius Days at forward and Efton Reid at center.

LSU off the bench will be paced by guard Eric Gaines and SEC Sixth Man of the Year and All-SEC First Team selection Tari Eason. Gaines averaged 9.2 points and over three assists per game, while Eason is at 16.9 points per game, 6.9 rebounds and 2.0 steals per game.

If LSU wins, it would meet the No. 4 seed Arkansas in the second game on Friday afternoon in the quarterfinals.