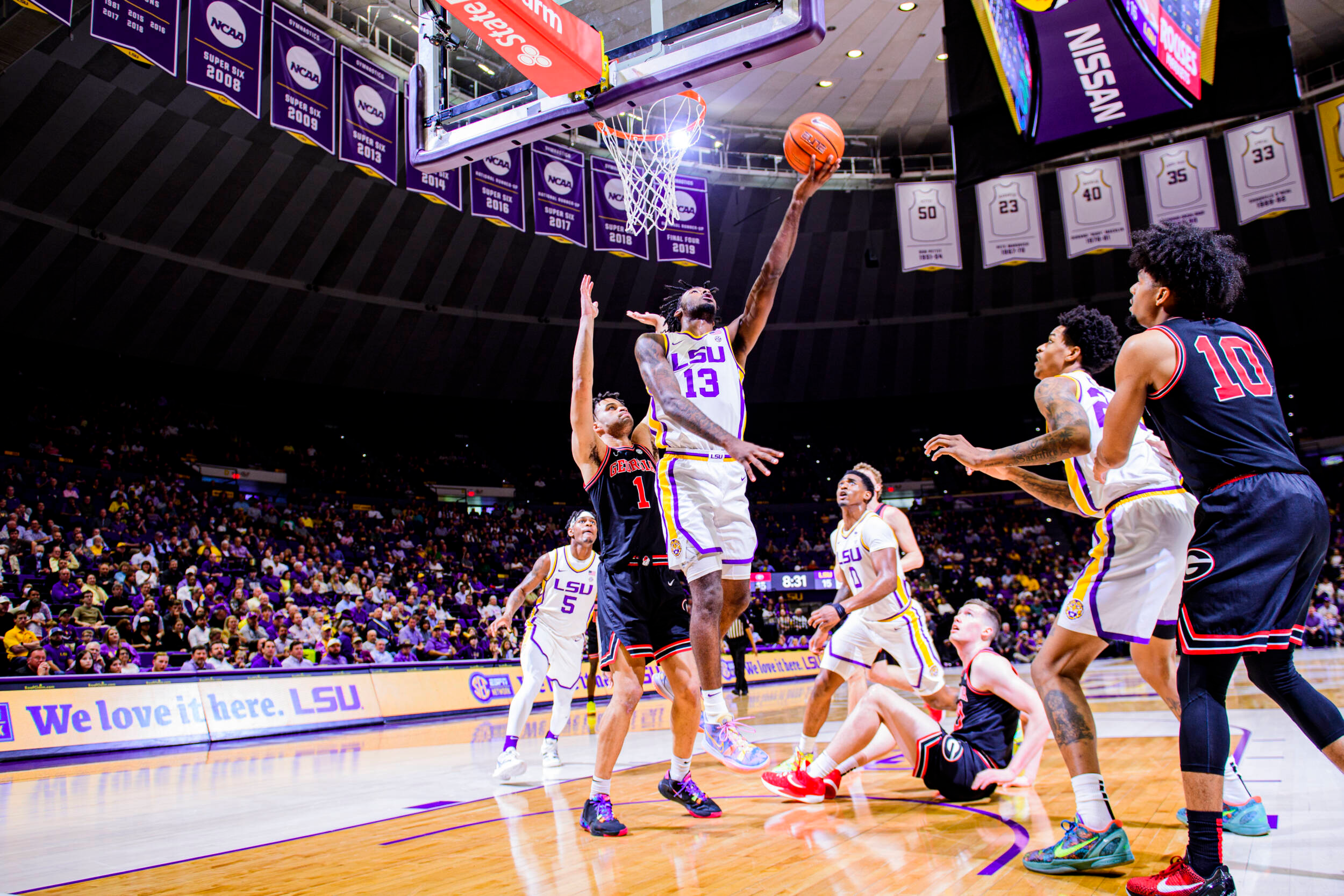 BATON ROUGE – The LSU Tigers recorded their third-straight win on Wednesday night at the Pete Maravich Assembly Center, using a 17-0 run over a 5:34 span at the end of the first half to launch the team to victory over the Georgia Bulldogs, 84-65.

Sophomore forward Tari Eason came off the bench and made an instant impact from the second he checked in at the 17:29 mark. Eason recorded a team-high 21 points and 9 rebounds, leading the Tigers to jump out to a 36-20 lead with 1:13 to go in the first half. That’s all they needed.

It’s another performance proving why he’s the best sixth man in the country. You can vote for Eason, who is a finalist for the Karl Malone Award for the top power forward in the country, here.

The Tigers also received quality contributions from senior Darius Days and freshman Brandon Murray, who both added 15 points. Days, however, recorded a double-double, with 12 rebounds to add to his stat total.

Point guard Xavier Pinson did a little bit of everything, as he always does, recording seven points and a team-leading 10 assists. It’s the first time in his career to have double figure assists. His impact to this team can’t be put into numbers, though. He’s the X-Factor. He puts everyone in the right spots like a true floor general.

“The ball moves when he’s in,” said head coach Will Wade. “When the ball moves, we can find mismatches. If you don’t find the mismatches, you have the mismatches on the offensive glass to go get the ball even if you miss the shot. That’s how it all works together. The whole pot stirs.”

LSU was relentless defensively, especially in the half court press, forcing 16 steals and 26 turnovers, turning that into 31 points on the other end. There were also four shot clock violations, with three coming in the first half and one coming in the second.

Georgia’s Kario Oquendo had a game-high 26 points and 5 rebounds in 33 minutes.

The Tigers went 34-for-69 from the field (49%) and made seven threes. Georgia shot 20-for-45 (44%) and hit eight treys. LSU had its largest lead of 30 with 6:28 remaining in the game, but the Bulldogs finished 8 of their last 8 from the field, cutting the final deficit to 19, leaving Coach Wade frustrated walking off the floor.

LSU won the battle on the glass, 36-27, thanks to 19 offensive rebounds and 17 defensive boards.

LSU is now 17-0 on the year with tonight’s starting five of Pinson, Days, Murray, Reid and Wilkinson.

The Tigers return to the court on Saturday, February 19th, at 2:30 p.m. CT as they are slated to take on the South Carolina Gamecocks in Columbia. The game will be televised on SEC Network.

“Good win. I thought we handled defense. I am disappointed in the last four and a half minutes of the game. We let them score on six of the last seven possessions. That is not good, but I thought (Xavier) Pinson, obviously with 10 assists, and Tari (Eason) was phenomenal in the first half just driving and finishing and (Darius) Days did a great job getting himself going on the offensive glass. Really pleased with those guys. You know we had 12 turnovers going into the last four minutes, then we gave the ball up three times. We got too sloppy at the end. Our defensive rebounding was much improved. I think they only got about 22-23% of their misses. We did a great job on the offensive glass with getting almost 50% of our misses. I thought that was a positive and it was a good win. We’ve got to move forward and get ready for South Carolina on Saturday.”

On how he felt about 16 steals, 26 turnovers, and the half-court press…

“Good. I felt like with them coming and turning it over 15 times a game we could get to them with pressure. They have had some injuries, but (Aaron) Cook is their primary ball handler. I thought our pressure was very good. Pinson had four steals and that was great. We had a couple with three steals, (Eric) Gaines and (Tari) Eason, Days also had a couple so I thought our pressure really helped us.”

On the Tigers slow start…

“I mean, yeah, I agree (with Darius). Coach (Will Wade) subbed us out, he told me if I saw how I was playing, I would have subbed myself out. So, I just looked in the mirror and we turned it around.”

On the Tigers slow start…

“We started off slow a little bit. Coach snatched us out, me and X (Pinson), put some other guys in, then he told us ‘pick it up’. Me and X got back in, we picked it up, Tari (Eason) was out there too, B-Murray (Brandon Murray) and Mwani (Wilkinson) were out there too, so like, we can’t start the game off a little slow.

On how tough the team is at full strength…

“When we have all our pieces, we’re very hard to beat, for sure. We got our point guard (Pinson) back. He helps us out a lot with the talking on defense, just being in the right spots, directing and facilitating on offense, so you know, him being back plays a big part in our success.

On whether he feels the team is hitting its stride…

“We have to attack the press better. We didn’t attack the press as well as we did in practice whether that be using ball screens or getting the ball through the middle. We didn’t do a good enough job on the glass. We missed a lot of shots and opportunities to get some good ball movement. Our guard play wasn’t what we needed it to be. We missed some post-up chances. We just have to do a better job in games like this.”

On turning around the team’s season…

“We have to be ready for the next game. That’s our focus. We play Ole Miss, who had a tough loss, next. In order to get through that we have to be ready to play. Truthfully, and truly, all I am focused on is the daily process of helping this team get better.”