Tigers Hold Off Bulldogs in 69-65 Affair 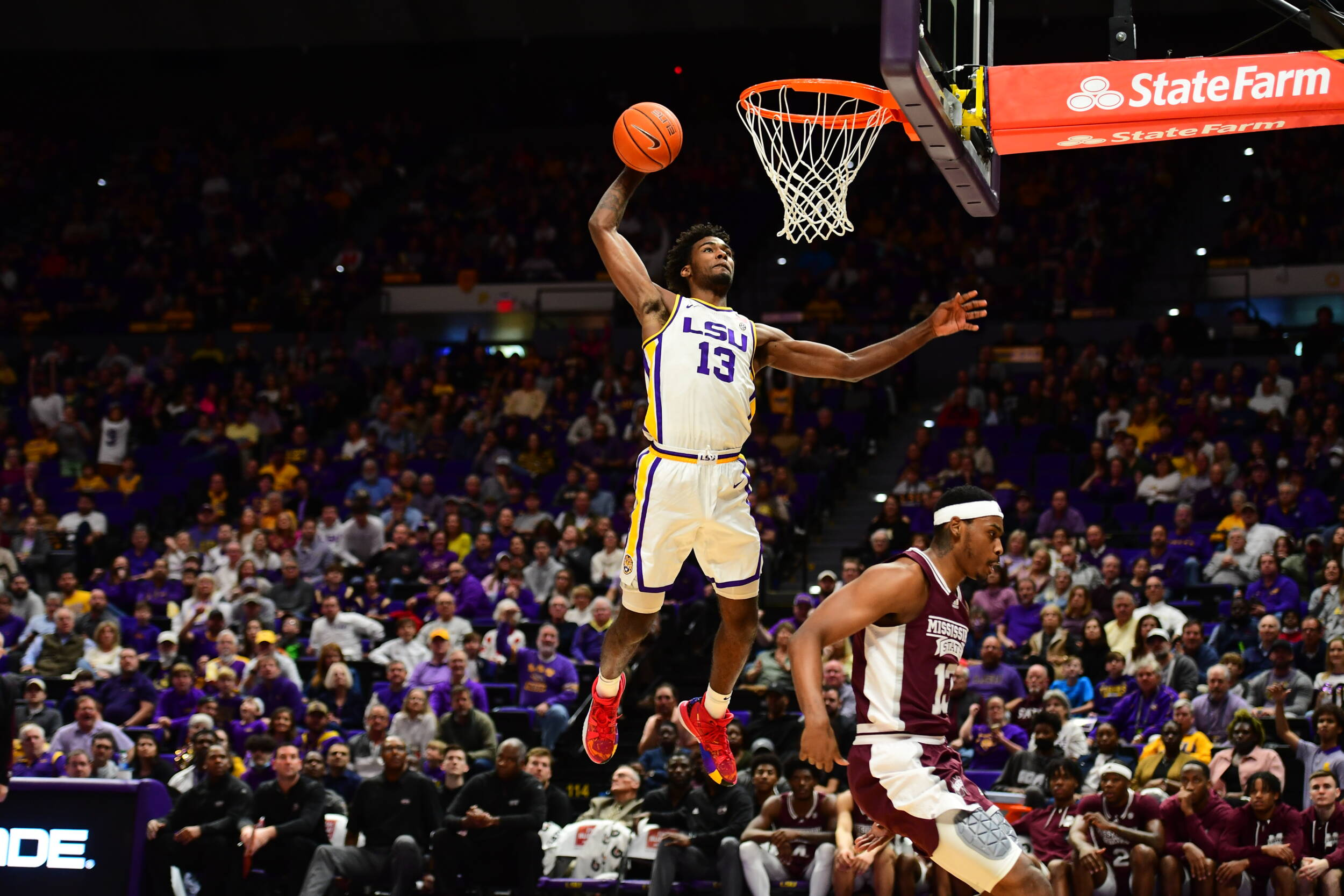 BATON ROUGE – Down 48-45 with 9:18 to play, LSU went on a 14-2 run to grab a nine-point lead and scored an important 69-65 win over Mississippi State Saturday night at the Pete Maravich Assembly Center.

The win upped LSU’s overall record to 18-7 and put LSU back in a tie with Alabama and Florida at 6-6 in the league. Mississippi State, which will play three games in five days next week, is 14-10 and 5-6 in the league.

LSU for the second straight game went with its lineup of Xavier Pinson and Brandon Murray at guards, Efton Reid III at center and Darius Days and Mwani Wilkinson at forwards and that lineup is now 16-0 for the season.

For the second straight game, Tari Eason led LSU with a 20-point scoring night, this time 23 points in 28 minutes, hitting 8-of-14 from the field with three treys and four free throws. Pinson finished with 12 points, four assists and three steals while Days finished with 10 points.

Iverson Molinar had 26 points, including 10-of-10 at the free throw line, to lead Mississippi State, while Tolu Smith had 15 points and Garrison Brooks 11 points and 11 rebounds.

O’Neal played 14 minutes and made 3-of-5 field goals and two free throws to finish with eight points and three rebounds.

Eason then would score four consecutive points on two free throws and a dunk and Eric Gaines added free throw to push the advantage to 59-50 with 4:22 left.

LSU in the first half allowed Mississippi State to get off to a 7-0 advantage to start the game but eventually the Tigers scored nine consecutive points to take a 9-7 lead with 11:59 to go in the opening half.

The Tigers would use a 20-4 run to go up 20-11 when Mwani Wilkinson scored a fast-break layup. It was a Wilkinson three that pushed the lead to double figures and reached 15 right before the half.

The Tigers are back in action on Wednesday night at home at 6 p.m. against the Georgia Bulldogs. Tickets are available at LSUTix.net.

Opening Statement…
“Great win. I thought the first half we played tremendous. It was as good complementary basketball that we have played all year. We didn’t turn the ball over, we were able to set our defense, we were able to kind of grind them to a halt and get our offense going. We were off to a slow start offensively in both halves. We got great looks in the first half, but just didn’t finish very well. We didn’t get things to go down and in the second half we missed a bunch of threes, most of them pretty open three’s.

“We’ve got to close the games out better, that was atrocious, but our press offense was good. We didn’t turn the ball over, we got fouled and did some things there but, our defense was sloppy and we’ve got to be more solid on defense. But, great win, two in a row, after what we have been though in the past couple of weeks this is huge. They are a really good team; I mean a great team. [Iverson] Molinar is a tremendous player, Tolu Smith is a great player, Garrison Brooks is a great player, like they are a tremendous team. I was very pleased to get the win. I was really fired up about the first half and that is something we can build off of. If we put two haves together like that, we will be very tough. I thought we did a really nice job there. Obviously, Tari (Eason) adding a different dimension to his game in the last couple of games making these three’s is hug. He’s unguardable when he is making three’s like this. Fifty percent tonight, three-for-six. He is a good three-point shooter, I have been saying that all year, but they are finally starting to fall because people are playing off of him for the drives. You know Xavier (Pinson) hit him on that big corner three that put us up four. I though he played really well.

“Shareef O’Neal gave us just huge minutes, I am very proud of him. He gave us some great minutes as well. Overall, a very good team win and it is time to move forward to Georgia on Wednesday night.”

On no turnover in the last nine and a half minutes of the first half
“Yeah, that’s the whole key. Just get a shot on the basket. We did a nice job on the glass tonight. I know we got out rebounded, but we didn’t get obliterated like we could have. We gave up 11 offensive rebounds. I think the offensive rebounded right around 33-35% of missed shots. We couldn’t give up much more than 37% of their missed shots or we would have been in trouble. You know that is what our numbers said coming into the game and with where we held them may have been the difference. Very nice job.”

On Mississippi State tying the game in the second half, then going on the run.
“I think they went up (three) and then we went on a (14-2) run and I thought that we critical. We finally stopped shooting a bunch of jump shots and drove the ball. We found a couple of sets that worked, found a couple of things that worked, and we had them confused a little bit and Pinson really led us there. He did a great job.”

Guard Xavier Pinson
On second-half struggles and late-game effort…
“We started out slow. We need to start coming out of the second half with better energy and pace like in the first half but for the most part we still thugged it out and walked out with a win.”

On increased selflessness…
“We’ve got a lot of guys who can contribute. Me trying to to be a pure scorer does nothing for us. We need a leader on the court to guide us in the right direction. I came here to win a championship so I mainly care about what I can do to help the next person.”

Forward Tari Eason
On getting another win in the PMAC…
“It felt amazing. I told the guys in the huddle ‘I’m not leaving this gym without a win.’ That’s a sigh of relief. It’s good to get a second-straight win and get the monkey off our back a bit, but it’s time to get back to work.”

On exclamation windmill…
“It’s something that I do on a regular basis if you ask a lot of people. I did it in high school a lot during fast breaks. I told the guys beforehand that if I get a wide-open chance then I’ll try something.”

Forward Shareef O’Neal
On always being ready to make an impact on games…
“Our leaders do a good job of keeping me prepared. We practice hard every day. Coach (Will Wade) tells me to wait for my opportunity and I’ll play my heart out everytime I get a chance.”

Opening statement…
“The game went really well and I was really happy about our defensive seven up and start. We really lost control of the game about four minutes into the first half and waited to make turnovers. We had 11 turnovers in the first half which is just way too many. We got sped up by the press a little bit, Rocket (Watts) threw one trying to throw it into two. Javian Davis that was 40 feet in the air and they gave the turnover to JD but it was really Rocket’s turnover. We just must do a better job in possessions. We worked a lot on the press offense, and I thought the second half we did a much better job handling the ball handling the pressure. (Tari) Eason really hurt us. In the first half he had those two three’s in a row. We knew he could make those shots when he’s open which he did. I thought we did a much better job defensively in the second half on our way back to get a one-point lead with 48-47. We’ve got to shoot the ball better, you know bottom line with three-for-17 with three’s, it’s not going to usually lead to a lot of wins on the road. We’ve also got to make our foul shots and Iverson (Molinar) was 10-for-10 but the rest of team was 10-for-18. We had a key spot there where we’re down one we missed two free throws in a row. After a really nice pass, you just can’t make those kinds of mistakes in a road game, and they scored 20 points off our turnovers and that’s really the biggest difference in the game.”