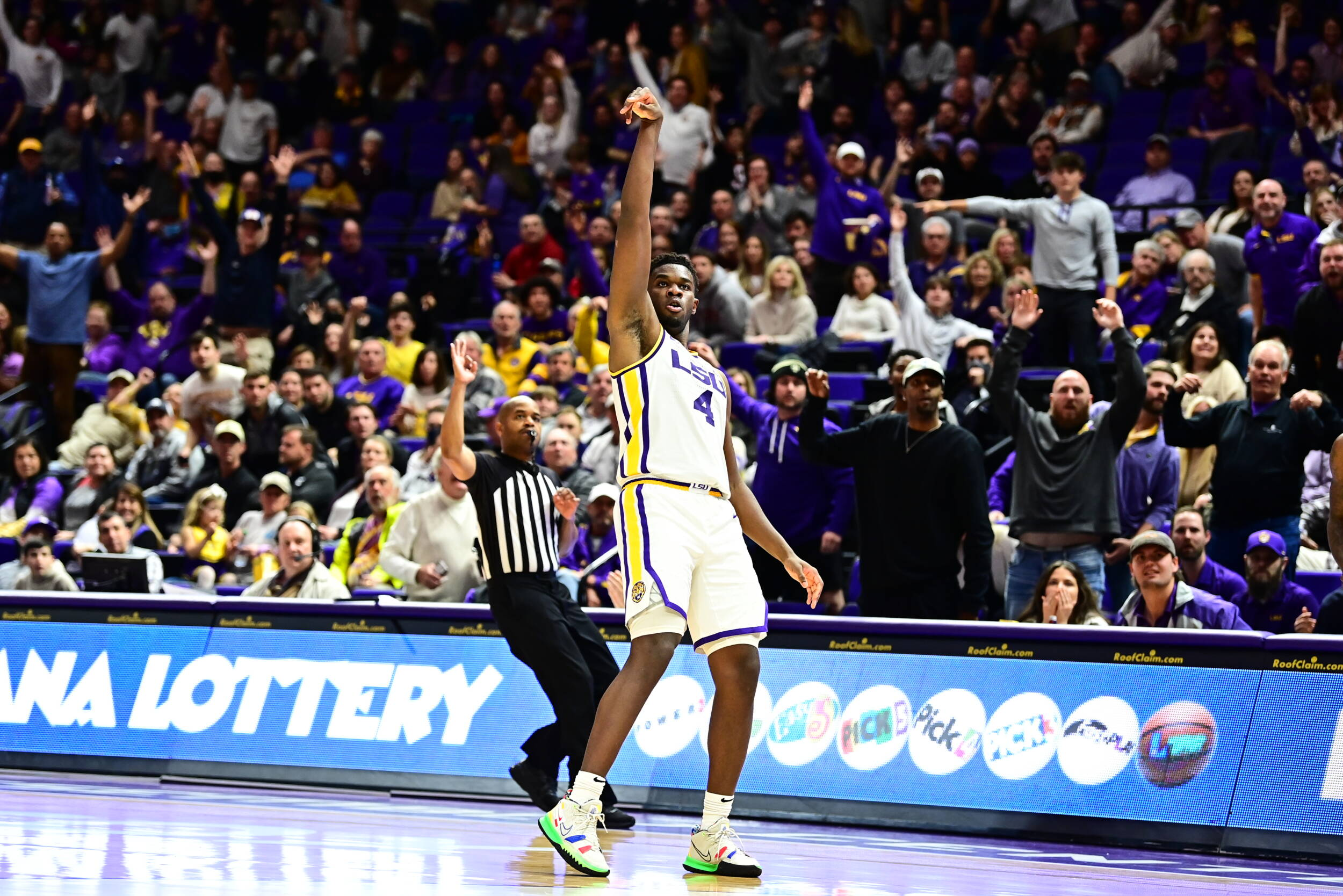 BATON ROUGE – The No. 25 LSU Tigers fell behind big in the first half and were never able to get back even, falling 76-72, over the Ole Miss Rebels Tuesday night at the Pete Maravich Assembly Center.

Xavier Pinson (MCL sprain) and Darius Days (ankle) both started the game for the first time together since against Tennessee on January 22. Tari Eason also made his second-straight start.

Ole Miss went on an early 16-4 run to lead 20-8 within the first eight minutes thanks to three-pointers from Daeshun Ruffin, Jaemyn Brakefield, and Luis Rodriguez. The three-point barrage from the Rebels continued, as they went on another 23-11 run that included two more threes from Austin Crowley.

Rodriguez’s second three of the half made it 43-19, the biggest lead of the night, with 5:44 remaining in the half.

The Rebel lead was trimmed to five after Days hit his third three of the half and Eric Gaines converted an and-1 after a steal.

Trailing 68-59 with 6 minutes remaining, Justice Williams attacked the basket, drew the foul and got the shot to go. His ensuing free throw made it a six-point game, but the Tigers’ foul trouble persisted, as Luis Rodriguez hit one of two at the line to extend the lead to seven with 4:01 left.

Neither team was able to score over the next 1:44 until Eric Gaines hit a running floater to make the score 69-64 with 2:17 remaining.

LSU’s defense, which went 9:41 without allowing a field goal, forced another turnover, and Tari Eason nailed a trey to make it 69-67 with 1:27 remaining. The Tigers almost forced another turnover at half-court, but Ole Miss won the fight for the ball, and Tye Fagan took it to the rim, where he was fouled by Darius Days and hit the consequent free throws.

An Eason tip-in from Gaines’ lob cut it back to two, but the Tigers were unable to get the crucial stop, sending Ole Miss to the line for the 23rd and 24th time of the half. Fagan hit two more free throws to seal the game.

Darius Days led LSU with 21 points and 13 boards, including six on the offensive glass. He was 5-for-9 from beyond the arc and added two steals. Gaines finished with 16 points, four boards, four steals and three assists, and Eason added 16 points.

The Tigers will head to Nashville, Tennessee to take on Vanderbilt on Saturday, February 5th, at 5:00 p.m. on SEC Network.

“Give Ole Miss a ton of credit, they got off to the 24-point lead. They were very comfortable, and I thought (Daeshun) Ruffin controlled the game early on. It just took us too long to settle in. A disappointing night for us because we were not able to settle in and find a way, but we have to get back to work and continue to get better. We did a great job on the offensive boards, we just have to finish some of those. We did not do a good enough job finishing those offensive rebounds that we grabbed. Give Ole Miss credit, we had a difficult time guarding the ball and guarding Ruffin, and (Nysier) Brooks was a major issue for us down low, we ended up having to foul him a ton. (Luis) Rodriguez did a nice job hitting some critical threes. Difficult, difficult loss for us, but we have to get off the mat and get ready to go on Saturday.”

Guard Eric Gaines
On how frustrating the past couple weeks have been and how they stay together…
“Keep stacking days. Onto the next. That’s all we can do.”

On how his ball security and turnovers coming at the worst time…
“A mistake. A mistake on my behalf. I got to keep the ball solid. Last six minutes of the game Coach (Will Wade) talked about free throws, taking care of the ball and being solid on defense. For that play, I have no excuse for it. I just got to be better.”

LSU Forward Darius Days
On LSU spending so much energy in the second half to dig out of the hole they made…
“Oh, for sure. They were too comfortable in the beginning of the game. They got up by 24 so we dug ourselves a hole and in the second half we tried to come back and make up the difference but at the same time you know the first 10 minutes of the first half it just wasn’t there.”

On how hard it is to get into rhythm when the other team keeps shooting free throws…
“It’s very difficult. When we were playing defense, we were very aggressive and very handsy. So, you know I feel like the rest of the league should know that by now.”

On how frustrating it was that Ole Miss kept making shots when LSU was in position…
“We missed a couple switches. They were very comfortable. Like I said before in the first 10 minutes of the game you know they were hitting shots left and right. We weren’t switching. For example, Tari (Eason) and I were supposed to switch at the top of the key and (Austin) Crowley shot a three at the top of the key. It was just some things that we need to work on and get better at. Don’t count us out yet. We got time and a lot of work to do.”

Opening statement
“I’ve never been more proud of our locker room. We came out and played as good as we could play. We talked about trying to play much faster in transition against their defense before the game. Everybody played great which allowed us to get off to a great start. We figured that LSU would make a great run being fueled by a great crowd at some point. I think Daeshun (Ruffin) is going to be okay despite the fact he couldn’t finish the game. He’ll get a MRI tomorrow. Austin Crowley fouling out forced us to play Matthew Murrell at the point despite his lack of experience there this season. This team found a way to win. It wasn’t pretty at times but they never stopped competing. I’m really happy for them and that’s a happy locker room.”