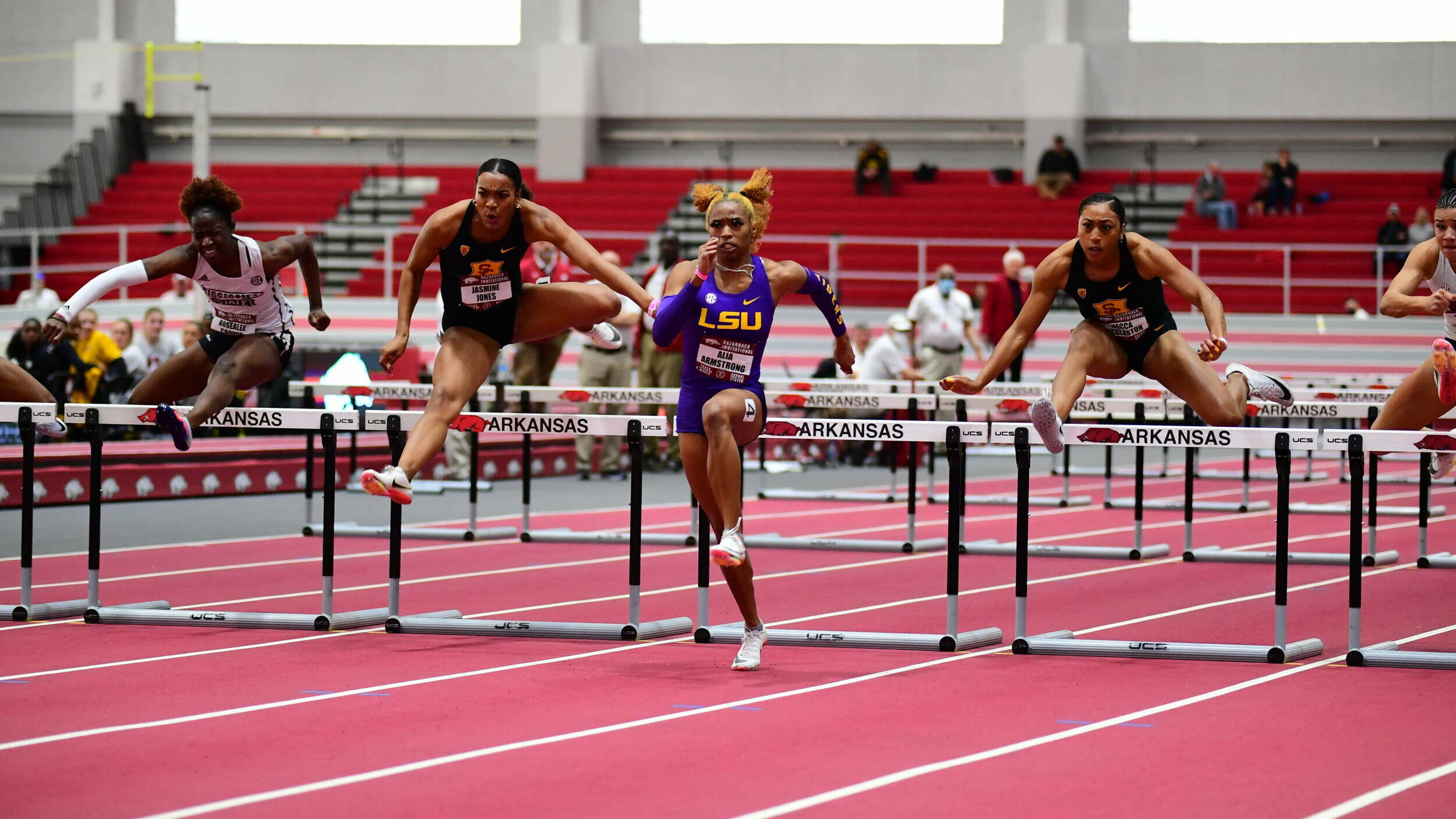 Fayetteville, Ark. – LSU hurdler Alia Armstrong had herself quite the day on Saturday at the Randal Tyson Track Center as she became the third fastest hurdler in NCAA history with a time of 7.86 in the 60 meter hurdles to win the event as the Tigers closed out competition at the Razorback Invitational.

Signs were pointing to a quick time from Armstrong in the 60 meter hurdles at what is dubbed the fastest indoor track in the world. Armstrong had won her previous two events to start the 2022 season in the 60 meter hurdles and even cracked eight seconds in her last race, a 7.96 second win at the Red Raider Open last weekend. The time of 7.96 was a hundredth of a second off her previous best of 7.95 that she ran in 2020 at this same track.

She advanced to the finals after winning her preliminary heat in a smooth qualifying time of 7.99 seconds. Running out of lane four, Armstrong was flawless over the five hurdles en route to clocking her career best time of 7.86 seconds. An elated reaction burst out of Armstrong once she saw the finalized time of 7.86 on the scoreboard. That matched LSU’s school record in the event that Tonea Marshall set back in 2020 and it moved her up into a three-way tie with Marshall and Grace Stark of Florida for the third fastest time ever run in NCAA history. It’s also tied for the NCAA lead this year and set a Razorback Invitational meet record.

Eric Edwards Jr. made it a sweep in the hurdles for the Tigers as he won his third consecutive event title to open up the 2022 season. Edwards Jr. ran a time of 7.68 to come away as the victory. In the finals of the women’s 60 meter hurdles, Leah Phillips took sixth with a personal best time of 8.14 seconds.

Davis Bove cracked the four minute barrier in the mile for the third time in his career on Saturday with a readout of 3:57.88 to place third in the event. He covered the final 400 meters of the race with a split of 57.85 to dip below four minutes. His other two sub-four minute performances came a year ago including his school record of 3:57.49 that he clocked in Nashville, Tennessee.

John Meyer and Apalos Edwards notched podium finishes in their respective events. Meyer collected a season best throw of 63’ 6.75” (19.37 meters) to finish second in the men’s shot put, and Edwards took third in his LSU debut with a triple jump of 51’ 5.50” (15.68 meters).

Michaela Rose and Katy-Ann McDonald ran to fourth and fifth place finishes in the 800 meter run. Rose ran the 10th fastest time in LSU history in her debut in the event for LSU with a readout of 2:04.80, and McDonald followed closely with a time of 2:05.27.

In the 400 meter dash, Amber Anning was LSU’s top woman finisher with a fifth place showing at a time of 52.78, and Ashton Hicks ran his first open 400 meters in the Purple & Gold with a time of 46.75 to place fourth.

The Tigers had three finalists in the 60 meter dash, two men and one woman. Kenroy Higgins II placed fourth with a readout of 6.69, and Dorian Camel took fifth at 6.73, which equaled his personal best. Tionna Beard-Brown placed sixth in the women’s final of the 60 meters with a time of 7.38.

LSU will split to two meets next week. LSU’s sprinters and hurdlers will head to Albuquerque for the New Mexico Collegiate Classic on February 4-5, and the rest of the squad will compete in Baton Rouge as LSU hosts the Bayou Bengal on February 4 at Carl Maddox Field House.