No. 12 Tigers Back At Maravich Center Saturday Vs. Arkansas 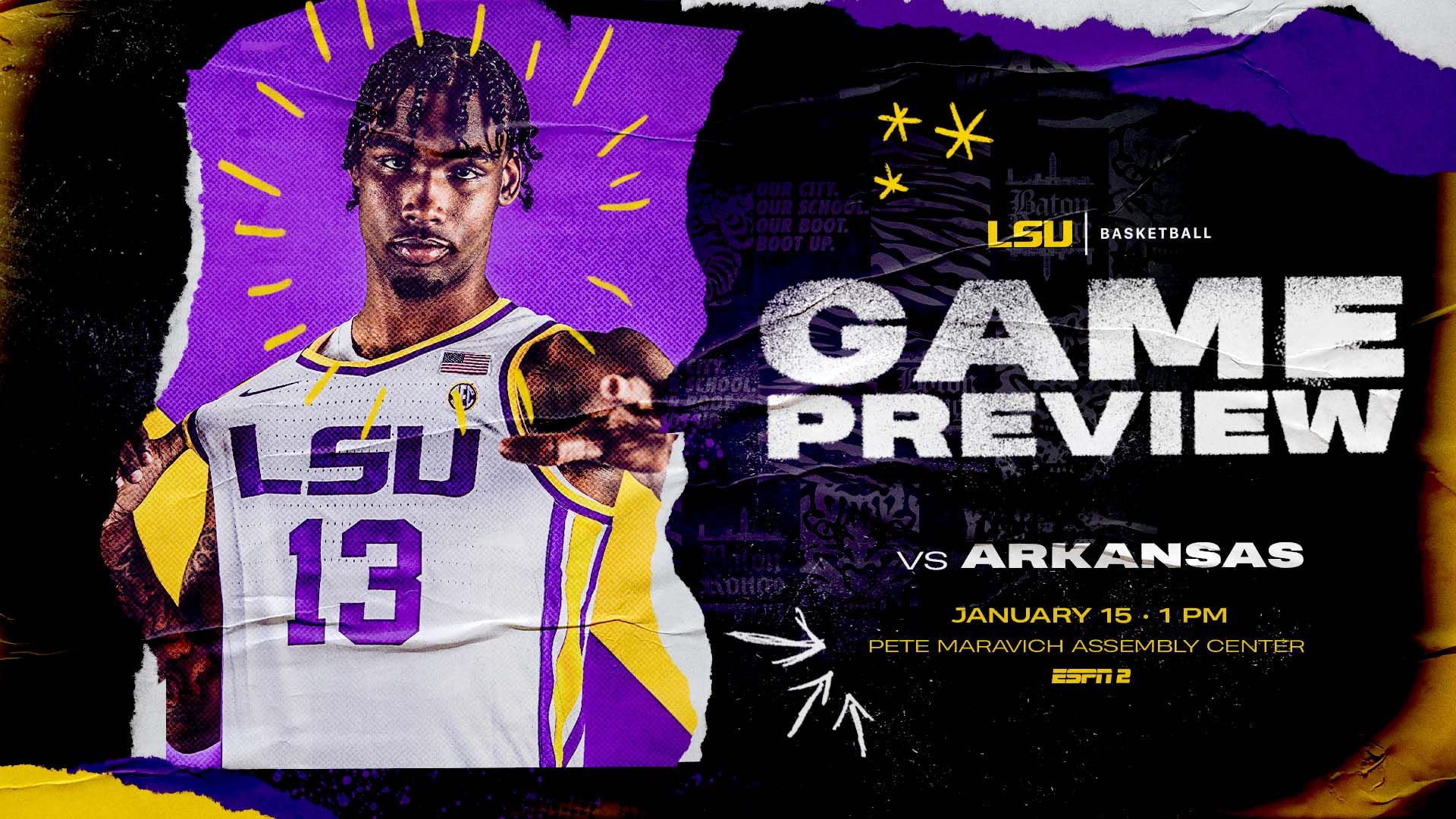 BATON ROUGE — It’s back to work for the No. 12 LSU Tigers Saturday when they host the Arkansas Razorbacks at 1 p.m. at the Pete Maravich Assembly Center.

The game on Dale Brown Court matches the Tigers (15-1, 3-1 in the Southeastern Conference) against the Razorbacks (11-5, 1-3). LSU defeated Florida in Gainesville on Wednesday night, 64-58, while Arkansas took care of Missouri, 87-43 in Fayetteville.

As of late afternoon, a limited number of tickets still remained available at LSUtix.net for purchase for the game. Tickets will go on sale at the upper concourse ticket windows of the Maravich Center at noon on Saturday.

The game will be televised on ESPN2 with Karl Ravech and Jimmy Dykes on the call (remotely). Courtside will be the Voice of the Tigers Chris Blair and former LSU head coach John Brady who will call the action on the affiliates of the LSU Sports Radio Network (BR flagship affiliate for Guaranty Media, Eagle 98.1 FM).

Darius Days had 20 points to lead LSU to the win on Wednesday with Eric Gaines getting 15 and Brandon Murray 10. Gaines stepped in as the starting point guard with Xavier Pinson out with an MCL strain and ran the offense. Junior Shareef O’Neal saw action as well scoring four points after both Efton Reid and Tari Eason got into extensive foul trouble.

Coach Will Wade said in his Friday media availability that Pinson as of Friday afternoon was “doubtful” for the game on Saturday but a final decision would be made Saturday morning.

Arkansas head coach Eric Musselman will be out after successful surgery on Thursday to repair a full tendon tear in his left shoulder. He is expected to miss at least two games, starting with the game against LSU on Saturday.

Assistant coach Keith Smart, a Baton Rouge native, is expected to serve as interim head coach. Smart joined the Razorbacks this past summer after 22 years coaching professionally. Smart attended McKinley HS in Baton Rouge and made the game winning shot in the Superdome that gave Indiana an NCAA championship in 1987.

The Razorbacks opened up 26-3 to start the game against Missouri in their 44-point win that broke a three-game losing streak. JD Notae leads the Razorbacks averaging 18.8 points a game. Chris Lykes is at 11.1 points, while Au’DIese Toney averages 10.6 and Davonte Davis 10.4 points.

LSU will be trying to win at the Assembly Center for the 14th consecutive game. The 13 wins is the second most for consecutive win sin the Will Wade era as the Tigers won 18 straight at the end of the 2017-18 season and into the 2018-19 season.

LSU and Arkansas have split games on home courts the last two seasons with LSU winning, 78-71 in the 2021 SEC Tournament semifinals. Arkansas leads the all-time series, 38-34, but LSU has won 19-of-the-31 games in Baton Rouge.

This will be the final home game for LSU until Jan. 26 when LSU hosts Texas A&M. LSU will be on the road next week for games at Alabama (Jan. 19) and at Tennessee (22).