Chance Favors The Aggressor, and on Saturday Night, the Aggressor was Tari Eason 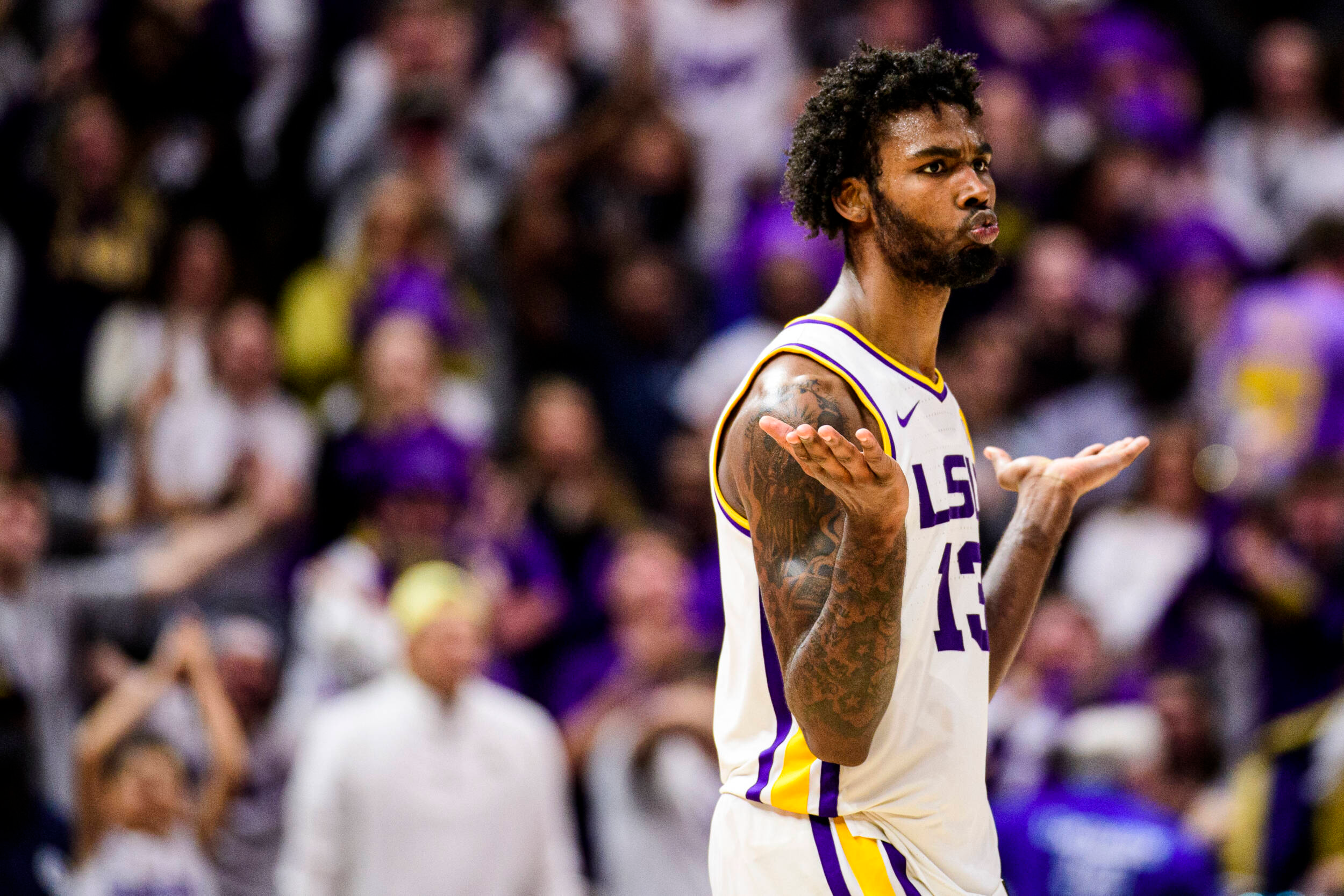 Tari Eason dreamed about taking down the blue bloods as a kid.

That’s why when he saw an opening, he didn’t look back. He was dunking it.

On Saturday night at the Pete Maravich Assembly Center, the aggressor was Eason, who put Tenneesse’s Olivier Nkamhoua on a poster with an emphatic one-handed slam that nearly blew the lid off the arena to help lead the No. 21 Tigers over the No. 18 Volunteers, 79-67.

“Anytime I get an opening, I’m dunking it,” Eason said. “Chance favors the aggressor.”

When head coach Will Wade got off the treadmill early Saturday morning, there was Eason, in a full sweat, getting a workout in the gym.

That type of work leads to winning, and it was Eason’s slam that capped off one of the biggest weeks in the PMAC in recent memory, giving the Tigers two top-20 victories over Kentucky and Tennessee to improve to 14-1 overall. It was the first week the Tigers have recorded two AP top-20 wins at home in the same week since 2000.

“Tari Eason is one of the best players in the country,” said Wade. “That’s not a stretch. He’s done it night in and night out. He continues to improve and get better.”

It was also fitting that on the week Dale Brown was honored, the Deaf Dome was back to its vintage form. The home court advantage was real.

“The crowd willed us down the stretch,” Wade said. “That’s what it’s about. The student section was great. We beat two top-20 teams in the country here this week. I don’t want to speak for Kent Lowe, but we probably haven’t had many weeks like that around here.”

Finishing with 24 points and 12 rebounds, Eason scored 17 of his 24 points in the second half. Senior Darius Days posted one of his better shooting performances of the season, tallying 15 points on 6-of-10 shooting from the field. Freshman Brandon Murray continued to show maturity beyond his years, adding 13 points of his own.

Two nationally-ranked wins flushes some bad taste away from the loss to Auburn, which Days categorized as a positive reset and something the group needed. They came back from Auburn hungrier after experiencing defeat for the first time, and they feasted this week.

“We really needed that loss,” said Days. “We needed to get knocked down and get back to square one. Once we lost, we shook back and did everything we were supposed to do. We were in the gym extra, just taking things a little more serious. These back-to-back wins are very big for us.”

The team had their two best practices of the season leading up to Saturday’s game, Wade says, and that preparation went beyond the gym, too. The players watched the Ole-Miss Tennessee game as a team on Wednesday, organized by senior leader Xavier Pinson. The culture and chemistry of the 2021-22 Tigers is profound both on the floor and within the walls of the locker room. Everyone is pulling in the same direction.

Comfort, however, is the enemy of progress. If you’ve listened to Wade before, you know two wins over Kentucky and Tennessee won’t move the needle one bit for the big-picture. For the Tigers to go the places they know they’re capable of going come March, week-to-week improvement is key. No turning back. Keep stacking days.

Pinson, who finished with nine points and seven assists, left the game at the 3:28 mark with an injury after slipping on the court in transition. He would later walk back out, to a hearty cheer from the crowd, to rejoin the team on the bench.

Wade provided an update on Pinson postgame, revealing it appears to be just a knee sprain for LSU’s point guard — the best case scenario — which is projected to be days to a week recovery.

There will be an additional scan Sunday and further evaluations to be sure.

“It appears to be just a knee sprain,” Wade confirmed. “We have to get it looked at, we’ll have to get it scanned again tomorrow. It’s the best case scenario, to be matter of days to a week with him, which would be fantastic.”

The focus now shifts to a road test with Florida, which always proves to be a hostile environment. Protecting home court is key — and the Tigers did just that — but it doesn’t get any easier from here.

“We have to be able to stay together and stay connected,” Wade said. “We’ve certainly got some positive momentum, but now we have to go on the road to a place that we’ve struggled at, and find a way to dig out a tough, tough road game.”

Being the aggressor, though, is part of the DNA in what makes this team special.

Being able to step up when the odds are stacked against you. That’s the way this group likes it.

“Our guys are used to difficult circumstances,” Wade said. “The tougher the situation, the better we do.”