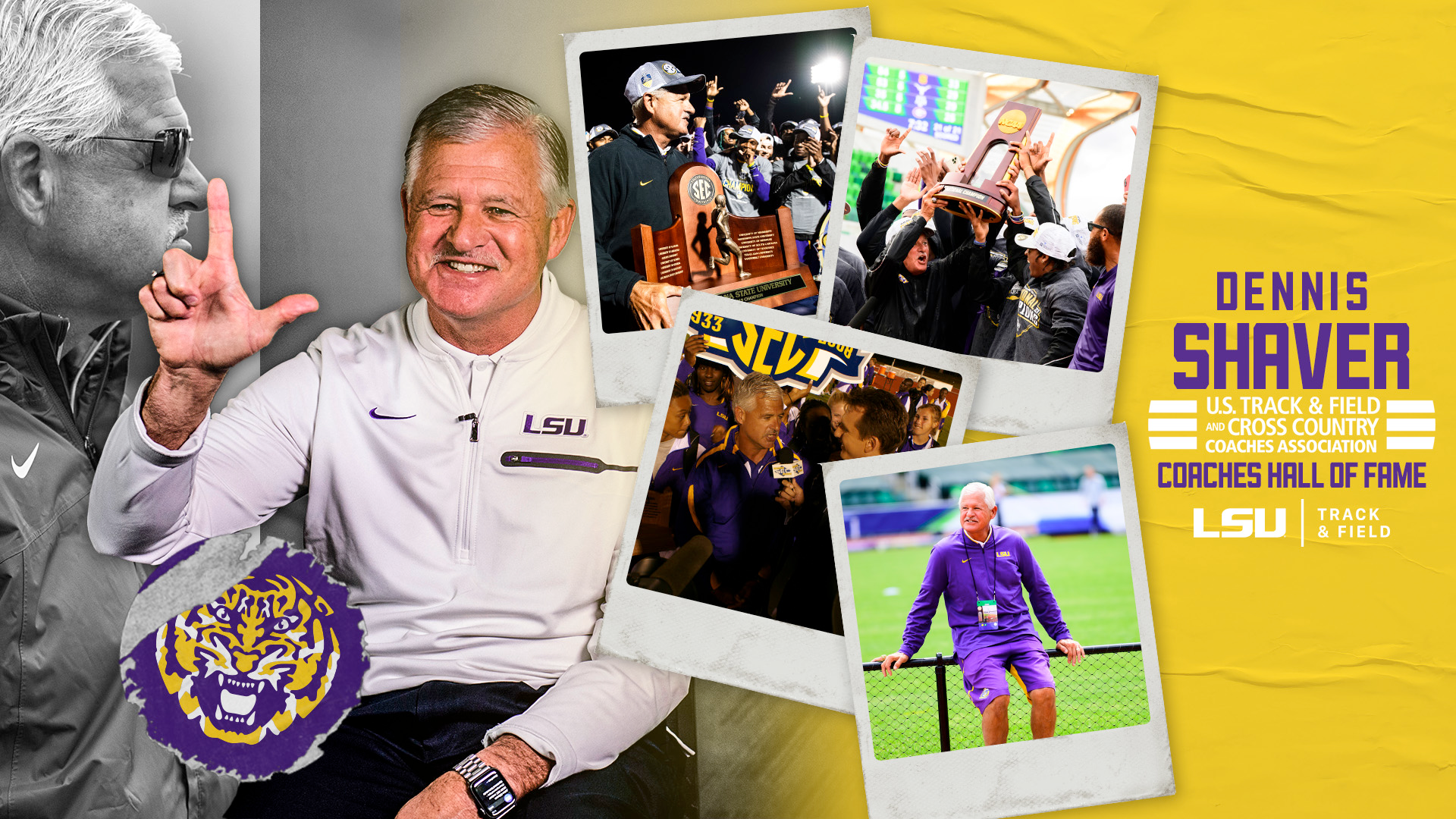 Life is all about decisions. Some are easy. Some are tough. Some of them you doubt. But decisions have to be made. Dennis Shaver had to make one right out of college that would determine his career path. Was he going to coach football or track? Well, interestingly enough, he did both at first.

A two-time graduate of the University of Texas at Arlington with his Bachelor of Arts (1979) and master’s degree in education (1981), Shaver played football collegiately as a defensive back for the Mavericks and even had two interceptions during the 1977 season.

His first coaching gig came in Kansas at Hutchinson Community College from the fall of 1981 to the spring of 1985. He coached both sports for four years, and the final three years of it, he was the head coach for track and field. Football in the fall and track in the spring, but he didn’t feel as if he was able to hone in and give his athletes, from both sports, his best day in and day out.

“To be honest, I didn’t feel like I knew very much about track and field early on in my career and I always leaned towards football,” Shaver remembered. “I pole vaulted in high school, but I didn’t have a thorough background on the best ways to train athletes for track and field.”

Eager To Learn
That’s where the likes of Loren Seagrave, Terry Masterson, Gary Winckler, and number of other mentors helped mold his coaching philosophy. Masterson and Shaver worked together at Hutchinson CC while Shaver constantly reached out to Seagrave (LSU) and Winckler (Illinois) about their coaching techniques and training programs.

“Me and Dennis go way back and I remember he was very eager to learn about the sport of track and field,” Winckler said. “Some coaches just go to clinics to get certified, but Dennis was one of the few that was really interested in exchanging ideas and bettering our sport with more quality methodology.”

It was after his four year, two sport stint at Hutchison when Barton Community College came calling. This position was enticing to Shaver. Why? Because it was to coach only track and field/cross country as the head coach. He jumped at the opportunity to coach one sport and become better at his craft.

It was at Barton where he built a women’s program that captured a combined eight NJCAA national titles in a six year span. Shaver directed Barton to the first ever triple crown in junior college history when the women’s cross country team, women’s indoor track and field team, and women’s outdoor track and field team swept NJCAA titles during the 1990-91 season.

“I really felt like my jump to Barton kickstarted my career and that’s where I came into my own,” Shaver noted. “That was when I really started getting deeper into the sport of track and field. I could focus on the sport and dedicate my full time to it and it paid off.”

Family Connections
An ode to his longevity in the sport, Shaver has coached a couple of parent/children combos in his time including current student-athlete Leah Phillips and her mother Christa Phillips. At Barton, he coached Christa from 1988-90 before she went on and earned a scholarship at the University of Arizona.

“One thing I always tell everybody about Coach Shaver is he cares,” the elder Phillips notes. “He always supported each of his student-athletes. And that’s why he’s so loved and respected in the track and field community.”

When it came time for Leah to make her decision on which school to go to, it was all up to her. Christa and her husband, Jey, both Arizona alums, wanted Leah to make her own decision. Leah, who competes in the hurdles just like her mother, is currently in year No. 2 in Baton Rouge under the tutelage of Shaver.

“When Leah told me she wanted to go to LSU, I knew she’d be in good hands,” Phillips continued. “She had the same feelings as I did when I was looking to go to Barton. Coach Shaver cared more about me personally than what I could do on that track. Leah felt a sense of comfort with Coach Shaver and knew that he would be there to support her through tough times.”

The Leap To The SEC
Harvey Glance gave Shaver his first chance in the SEC as he hired him on as an assistant coach at Auburn in The Plains following Shaver’s historic NJCAA triple crown sweep during the 1990-91 season.

“I can’t thank Harvey enough for giving me that initial opportunity in the SEC,” Shaver notes. “When I took that step, it boosted my confidence, but also with that were expectations. So that move made me work harder than I ever had before.

Shaver spent three years in Auburn before he made the move to LSU in the summer of 1995 under then head coach Pat Henry. The two were familiar with each other as they both had coached against one another on the JUCO level in Kansas – Shaver at Barton Community College and Henry at Blinn College. They now continue to coach against one another with Shaver at LSU and Henry at Texas A&M.

“We both had really good teams in Kansas and so that is why he was on my radar when I was searching for an assistant at LSU,” Henry mentioned. “I hired Dennis Shaver because he was a really good coach. I knew he knew how to recruit and how bad he wanted to win.

“He had proven over the years that he knew what he was doing. He was organized and he displayed that from the beginning.”

Getting Settled In Baton Rouge
One of the wildest stories you’ll hear involving Shaver is his first day on the job at LSU. Shaver officially accepted the position a few days before Labor Day in 1995. It was September 5, 1995, a Tuesday, and a six hour drive to Baton Rouge awaited. He knocked that out, and before doing anything else, he pulled right up to the track on LSU’s campus and coached his first practice in the Bayou. That was day one and the rest is history.

“It was a tremendous challenge when I came to Baton Rouge,” Shaver noted. “LSU was a powerhouse in the women’s sprint and hurdles, and that was my main responsibility.

“I just told them on day one that communication is going to be key. I credit that first group of women that I worked with at LSU for buying into my philosophy. We communicated so well from the get go and that’s what was the key to success.”

D’Andre Hill, Peta-Gaye Dowdie, Muna Lee, and Lolo Jones were just a few of the many women’s sprinters he worked with directly after arriving in Baton Rouge. All four made appearances to represent their home countries in the Olympics under the direction of Shaver while also winning numerous NCAA titles.

“First and foremost he was a great mentor and father figure,” Lee remembered. “We just clicked on another level – I understood him and he understood me.

“He knew how to keep me from overthinking. He would give me small tasks to where I wouldn’t think about failure. I would have never accomplished the things I did in my career without him, and I’m forever indebted for that.”

At The Helm
After nine years of serving as an assistant, Shaver was promoted to head coach in the summer of 2004. Since then, he’s led LSU to two national titles – women’s outdoor in 2008 and men’s outdoor in 2021. In addition to that, LSU has captured eight SEC titles during his time as the head man.

Two of Shaver’s athletes – Kimberlyn Duncan & Sha’Carri Richardson – have won the most prestigious award in collegiate track and field while working with Shaver. Duncan became LSU’s first ever winner of The Bowerman in 2012, and Richardson followed suit in 2019.

Richard Thompson was far from a sprint prodigy when he arrived on the campus of LSU in January of 2005, but four track seasons later he had risen to not only national prominence, but world prominence. He won the 2008 NCAA title in June, and then he proceed to capture Olympic silver in the 100 meters two months later behind none other than Usain Bolt. Thompson would go on to represent Trinidad & Tobago at the 2012 London Olympics, 2016 Rio Olympics, and 2020 Tokyo Olympics.

“Coach Shaver took a chance on me,” Thompson recalled about his chance at LSU. “I didn’t have these super fast times coming in, but Shaver saw something in me. He made me believe in who I am and as a result of that, I became one of the best in the world at the time.

“He always told us to worry about the things we can control. That principle has enabled so many of his student-athletes to go on and live successful lives.”

As Shaver looks back on where his career has brought him and all he’s accomplished, one thing keeps bringing him back for more. It’s the athletes.

“The biggest thing is I don’t consider this a job,” Shaver mentioned. “I really enjoy being around the athletes. Practice is my favorite part of the day.

“Seeing the overall growth from each and everyone of our athletes is gratifying. Some go on to be professionals in the sport of track & field, while others go one to be successful in a wide array of professions. Whenever they may leave LSU, we want them to be ready for life.”

Shaver notes that there are several keys that factors into being a good coach. No matter what the sport is, not every single athlete is the same. Coaches have to find ways to relate with each individual to get the best out of them.

“You have to find ways to bring out the best in people,” Shaver says. “You have to make them believe in themselves. Then you have to show them on paper how they can achieve their goals through small steps while they are here.”

As Shaver is set to officially enter the U.S. Track & Field and Cross Country Coaches Association Hall of Fame on Wednesday, there’s no doubt about it – he’s a legend. His work ethic, his pride, his accountability. It spreads, and it demands the best out of those around him. He would have been a winner no matter the profession he picked, but the track and field community is glad he chose track over the pigskin.