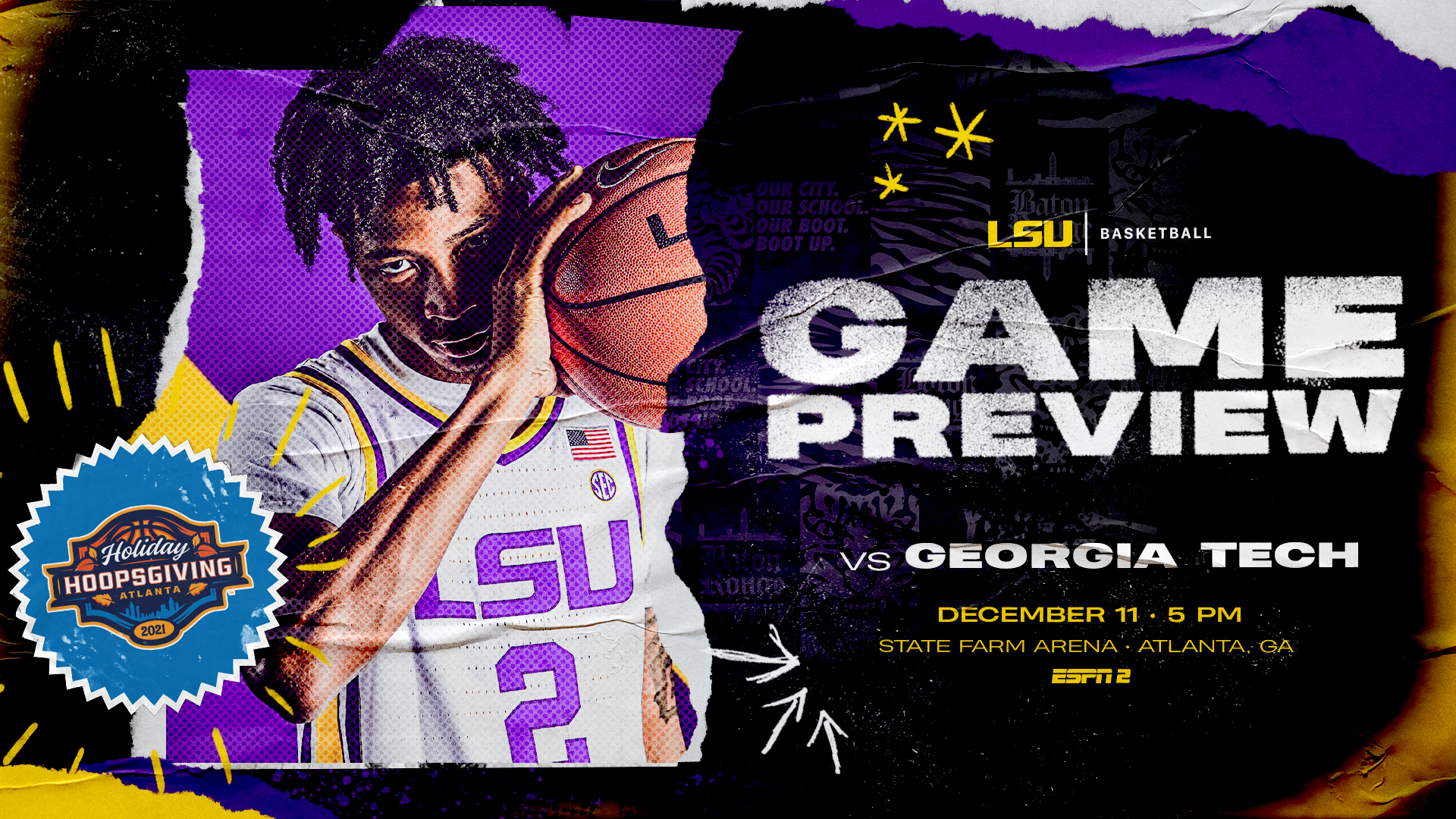 BATON ROUGE  – The LSU men’s basketball team, after a final practice at the LSU practice facility, was set to fly to Atlanta late Friday as the nationally-ranked Tigers are scheduled to play in the Holiday Hoopsgiving set of games in State Farm Arena on Saturday.

LSU will meet Georgia Tech in the first game of the evening session at 5 p.m. CT (6 p.m. ET) at the home of the Atlanta Hawks with the Voice of the Tigers Chris Blair and former LSU head basketball coach John Brady on the call on the affiliates of the LSU Sports Radio Network (Guaranty Media flagship Eagle 98.1 FM in Baton Rouge).

Dave Neal and Daymeon Fishback will call the telecast of the game on ESPN2.

In the other games, Auburn will face Nebraska at 10:30 a.m. CT, followed by Clemson and Drake. After LSU-Georgia Tech, the evening session will conclude with Ole Miss and Western Kentucky.

LSU is 8-0 on the season and as of Thursday afternoon was ranked No. 3 in the NCAA NET and No. 24 in the Ferris Mowers Coaches Poll powered by USA Today Sports and No. 25 in the AP Media Poll. LSU has not played since a 66-51 win over Ohio on Dec. 1 as the program paused for the traditional break for concentrated study period and final exams.

Georgia Tech is 5-3 on the year after losing at home on Sunday, 79-62, to North Carolina in its ACC opener. The Yellow Jackets are led by the leading scorer in the Atlantic Coast Conference, Michael Devoe who is scoring at a 23.6 points per game clip and shooting 54.5 percent from outside the arc or 3.43 treys made her game.

Jordan Usher is averaging 13.5 points and 7.1 rebounds a game for Coach Josh Pastner.

LSU and Georgia Tech have met 35 times with LSU holding a 21-14 lead. This will be the first time the team have met since November of 2011 when LSU defeated Georgia Tech, 59-50, on the final day of the Charleston Classic. Georgia Tech was an early member of the Southeastern Conference, departing the league in 1964.

Since the Yellow Jackets left the league, most of the meetings have been in NCAA play except for a 1986 and 1987 home-and-home series. LSU won in the Sweet 16 in 1986 (in Atlanta at the Omni), in the first round in 1987 and then Georgia Tech won in Knoxville in the second round in 1990.

LSU was scheduled to be in the 2020 Holiday Hoopsgiving, but had to bail on the event because of contact tracing issues within the LSU program. That would lead to a series of events when a quickly added morning game on Dec. 14 was the last game LSU would play until Dec. 26 as three other playing dates were scrubbed from the schedule because of COVID-19 issues.

This will be LSU’s first time to play in State Farm Arena. LSU has played in several events in Atlanta, most notably SEC Tournaments and NCAA events at venues like the Atlanta Athletic Club, the Omni and the Georgia Dome. LSU advanced to the 2006 Final Four after wins over Duke and Texas at the Georgia Dome and to the 1986 Final Four after wins over Georgia Tech and Kentucky at The Omni.

“We’ve really given them a couple of days off to focus on academics and then we’ve gotten back into the swing of things with practice,” said Coach Will Wade after his Tipoff Luncheon at L’Auberge Thursday afternoon. “Georgia Tech has a great scorer with Devoe and Usher and some of their other guys. They run a Princeton style offense which we haven’t played this year. Defensively, they play every defense known to man. They do a bunch of different stuff so we are going to have to be prepared for changing defense and a lot of different looks. They make it very hard to get in rhythm against them because of all the different defenses that they play.”

Darius Days continues to lead the Tigers in scoring at 16.0 points per game and 7.8 rebounds, while Tari Eason, who has scored 20 in two of LSU’s last three games, is averaging 14.6 points and a team best 7.9 rebounds. Efton Reid is also in double figures at 10.1 points per game and 5.3 rebounds.

After playing on Saturday, the Tigers will return to the Maravich Center on Tuesday night, Dec. 14, for a 6 p.m. game with Northwestern State.