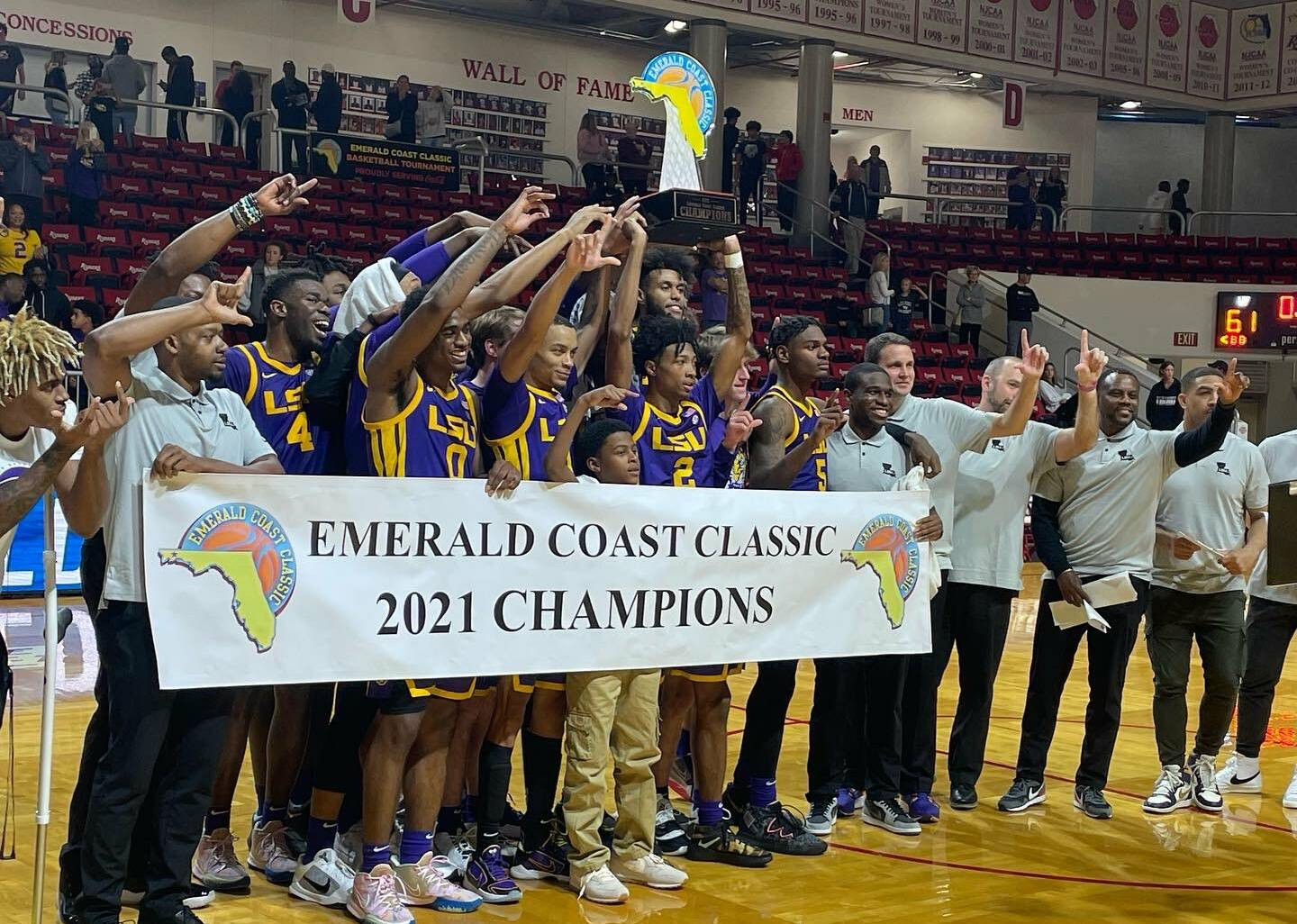 NICEVILLE, Florida – With the clock running under a minute left Saturday night in the Emerald Coast Classic championship game, the LSU crowd of close to 1,000, which for two nights was turning Raider Arena at Northwest Florida State into a Tiger home court began chanting,  “L-S-U, L-S-U, L-S-U!”

The celebration had begun as another goal was checked off the Will Wade program at LSU – a regular-season bracketed tournament championship as the Tigers used a 15-0 run in the first half to get the lead for good and defeated previously undefeated Wake Forest, 75-61.

The Tigers are now 7-0 with a trophy in hand in one of these early season bracketed events for the first time since 2004. LSU plays Wednesday night at 7 p.m. against Ohio in the Pete Maravich Assembly Center.

LSU has won the first seven games of the season for the first time since the 2008-09 SEC Championship season. Wake Forest fell to 6-1.

Based on the two games, Days and Tari Eason, who scored 20 against Penn State and nine in the championship game, were named to the all-tournament team with Eason named the tournament MVP.

Wake Forest was able to get the advantage on LSU with an 11-6 lead going into the second media timeout.

But coming out of that TV intermission, the Tiger system kicked in with good offense, and defense that led to more offense.

Reid got LSU started with a bucket and off a Wake miss, Eason hit a jumper to cut the deficit to 11-10. After a turnover, Eason was fouled and made two free throws to give LSU the lead for good at 12-11.

Reid on the defensive end blocked a shot and then after Wake got the offensive board, they turned it over and on the other end that led to a three-pointer by Brandon Murray to make the advantage for LSU, 15-11.

Pinson and Fudge would add three-pointers to push the margin to 21-10 at the next media timeout some four minutes later.

Only once in the first four minutes of the second half did Wake Forest get the game under double figures the rest of the way.

“Great win. We haven’t won one of these in over 15 years, so that was huge for us. Thank our fans who came, we had a home-court advantage on both days. When we come out and they’re chanting ‘L-S-U,’ that gives us a big boost. Really appreciative of them for coming out and spending their Thanksgiving weekend with us. Our guys played hard on a short prep. We did as well as we could’ve done in terms of preparation. It was all about playing harder than the other team and being feistier and tougher. I thought we were that today. Credit to our guys, [Darius] Days got us off to a good start. Tari [Eason] was consistent all tournament. Alex Fudge was a difference-maker for us today. He got us going in the first half, especially on the offensive end. He was uber-efficient, 11 and 9, hit the three in transition, he was cutting, moving. He was a huge piece for us today. [Xavier] Pinson obviously with seven steals too.

“… We have a lot of stuff we have to correct. I’m as uptight as anybody, but we’ll have all the stuff corrected by Monday. We’re going to enjoy this, we haven’t done this in a long time. We’re off to a great start. We have to finish it off on Wednesday and finish up our first portion of our non-conference schedule, so we’ll get back to work on Monday. Lots of stuff to correct from Penn State, lots to correct from Wake Forest. We’ll put it all to rest tomorrow.”

On the importance of the tournament win …

“This is something we haven’t been very good in.  We’ve got fans that come to all these tournaments and spend their hard-earned money and we need to pay them back by winning some of these. We also needed to win it for ourselves too. Our program has come a long way in five years. This was one of the final steps. We don’t have a lot of other firsts left to do. We’ve done a lot of firsts in the program in the first five years.”