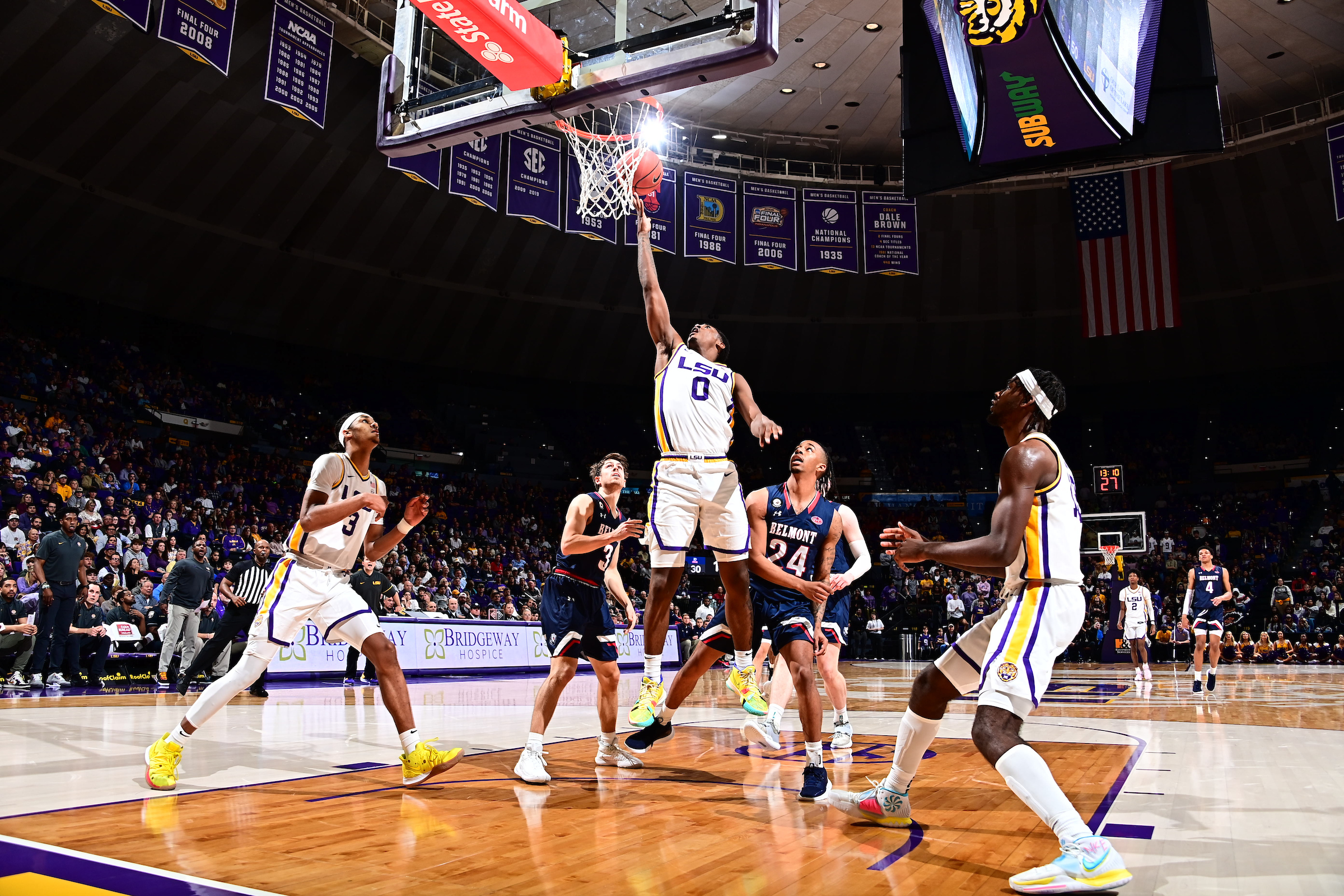 With the win, the Tigers have now won eight consecutive home games dating back to last season and opens the year with a 5-0 record for the first time since the 2018-19 season.

The Tigers shot a season-high 54.2 percent from the field (32-of-59) and 86.7 percent at the charity stripe (13-of-15), while holding Belmont to a 32.3 field goal percentage in the game. LSU smothered Belmont with its defense forcing 16 turnovers that they converted into 21 points and on offense, they dominated the paint 50-20.

Tari Eason and Brandon Murray led the Tigers with 15 points each as Murray hit 5-of-7 field goal attempts and all three three-point tries, while Eason hit 7-of-11 field goals. Xavier Pinson put up a season-high 14 points on 6-of-10 shooting with two 3-point field goals and Efton Reid rounded out the top scorers with 12 points and recorded season-bests of nine rebounds and three blocks.

Belmont opened the game with a 7-0 run and LSU struggled to get going, shooting 0-of-5 from the floor. After a Murray triple prior to the under 12-minute media timeout, the Tigers clamped down defensively to force six turnovers and proceeded to run away with the half thanks to a 22-4 run to hold a 25-11 lead at the 7:03 mark. The Tigers went into halftime with a 36-23 advantage led by Pinson’s 10 points on 4-of-6 shooting, including a pair of 3-pointers.

LSU gave Belmont a dose of its own medicine by starting the second half with a 7-0 run and went a step further, increasing its margin to 30 points behind 14 unanswered points. The Tigers led 62-32 at the first media timeout of the half and never looked back as the margin ballooned to as many as 39 points.

The Tigers will head to Niceville, Fla. Nov. 26-27 to participate in the Emerald Coast Classic. LSU will take on Penn State on Friday, Nov. 26 at 6 p.m. before playing either Wake Forest or Oregon State on Saturday.

“Great win, great effort from our guys. We got off to a little bit of a slow start and had a few mistakes. Our offense was a little clanky to start the game. We are really proud of our guys, their urgency and discipline. I thought the crowd was phenomenal; the crowd got into it. The students were here right before Thanksgiving, the guys that didn’t go home, that was awesome. They are a really good offensive team; top-25, top-30 offensively in the country. I thought we did a really nice job swarming the ball and blocking shots. Our whole key was to win in the paint. Their three’s get a lot of notoriety, they just bludgeon the paint. Number 33 (Nick Muszynski) is a load down in the paint, 6-11, 7-5 wingspan and we did a great job on him. Kept him from throwing their mountain stuff over the top. Our guys did an unbelievable job. They were disciplined, and they were focused on him. I think Xavier (Pinson) played great to get us going in the first half and picked up our offense.

“What more can you say about Tari Eason, he brings it every game. Brings his lunch pale. He’s talented and he makes things happen. I love the fact that he missed that dunk, but he came right back, gets another steal and goes and dunks it again. It’s very impressive, it’s awesome. I tell him all the time, if you are going to make a mistake, make an aggressive mistake. He was all frustrated and I told him that was an aggressive mistake, we don’t care about that. Just keep going all out. I thought he did a really nice job. Brandon Murray was tremendous. He made some shots and so I’m just proud of our guys.

“I can say it now, because it sounds like an excuse, but we have been sick. We had a lot of guys out for a couple days, we had some guys really step up as well. Two or three starters that have not been right. We had to put IV’s in and one of them missed practice for two days. I don’t want it to sound like an excuse if we had lost, but we had some guys step up and make things happen. Just a great win and we have to turn the page. I think we have been awful; in these early season tournaments, we haven’t won one of these since we’ve been here. We’ve won a lot of games. We’ve done a lot of stuff. We’ve been horrific in these early season tournaments. We came in and got beat by Florida State in overtime. We got beat by Utah State. We have just not been good. This is another thing we have to get right. We have to go to Destin and be locked in. We have to be ready for Penn State on Friday night at six o’clock, because quite frankly this is one area we have to approve in if we want to be the program that we want to be. That was the message to the team and that’s going to be the message for the next couple days as we get ready to go the Destin.”

“We knew coming into tonight that LSU was a really talented team and that we’d have to play exceptionally well and compete in order to have a chance at winning the game. We did anything but play exceptionally well. This wasn’t a typical Belmont performance at all. We had a lot of trouble getting into rhythm offensively. We had a lot of good looks tonight that couldn’t go down. That was a product of LSU speeding us up. Again I think we didn’t compete defensively during the last 15 minutes despite having some moments but that’s something we can take care of in practice.”