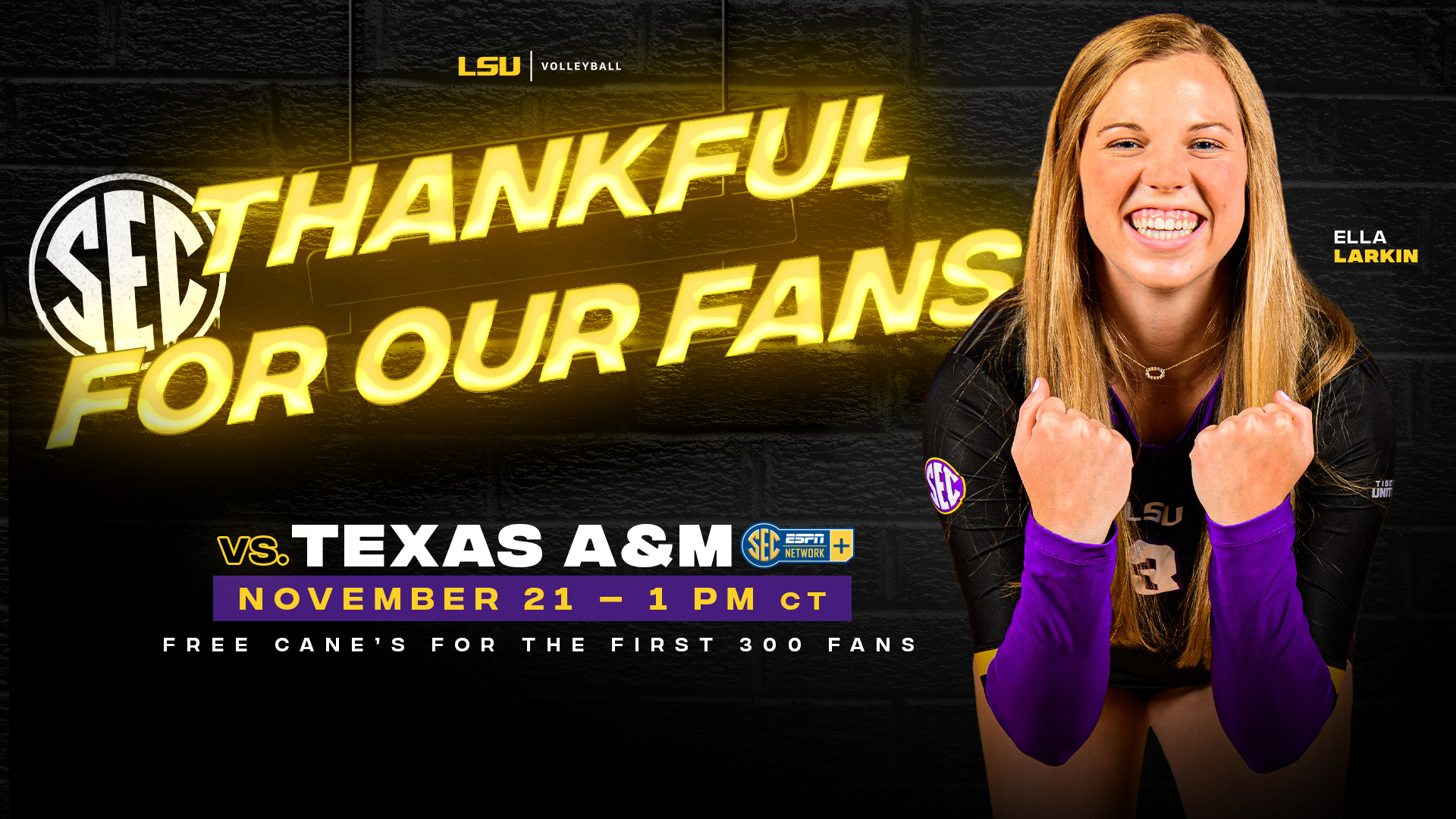 The first 300 fans in attendance at Sunday’s match will receive a free three-finger combo from Raising Canes. LSU Volleyball will also be accepting canned goods and non-perishable food items to be donated to the Greater Baton Rouge Food Bank in the spirit of Thanksgiving. Donation collection boxes will be located near the entrance to the PMAC prior to the match. Fans can also make financial donations to the food bank here.

The Tigers are coming off a 1-1 series split at Ole Miss highlighted by their second reverse sweep this season to end the weekend series. After logging 16 blocks in the come-from-behind victory, LSU ranks No. 22 in the NCAA with 2.61 blocks per set and ranks second in the SEC with 247.5 total blocks this season. Offensively, the Tigers average 12.96 kills per set and are hitting .231.

“We are just now finding our stride and playing the best we have been played all year,” said head coach Fran Flory. “This team fights for and with each other and the team still feels like they have a ton to prove.”

Outside hitter Kylie DeBerg paces the Tigers with 3.89 kills per set and 27 aces this season. Right side Taylor Bannister follows with 2.87 kills per set and her career total of 1,841 kills ranks No. 9 in the SEC record book. Bannister and DeBerg rank No. 11 and N. 13, respectively among all NCAA Division I active players.

Middle blocker Anita Anwusi sits sixth in the SEC with a .369 attacking percentage as well as registering 1.24 blocks per set. Anwusi is coming off a career-high 16 kills behind a .417 hitting percentage and contributed seven blocks.

Libero Raigen Cianciulli – the SEC all-time leader in career digs – leads the conference with 5.03 digs per set in SEC matches only, and her 2,205 total digs is ninth among active NCAA D1 players.

LSU is 17-28 all-time against Texas A&M and has dropped four of the last five meetings in head-to-head matches.

“I would say that right now, teams do not want to play LSU,” Flory said. “With us having majority of our pieces finally together and clicking at the same time, I think teams know we are a dangerous group and a team that has the potential to be a sneaky good NCAA Tournament team.”

Texas A&M is currently nursing a four-match losing streak after falling in straight sets Wednesday night against Arkansas. The Aggies do lead the SEC with 16.46 digs per set, but they allow their opponents to hit .211 while only having a .190 attaching percentage themselves.

Outside hitter Morgan Christon leads the Aggies with 3.35 kills per set (295 total) and outside hitter Lauren Davis follows with 2.82 kills per set (237 total). Setter Camille Conner ranks No. 6 in the SEC with 9.59 assists per set, and libero Macy Carrabine ranks fourth in the league with 4.10 digs per set this season.

“Texas A&M is a good team and has beaten good teams,” Flory said. “They [Texas A&M] are going through a tough stretch right now and are still bouncing back from some key injuries, but they have really good volleyball players like Davis and Christon. When they are in system, they are good and difficult to deal with, so we have to be prepared for their best Sunday.”