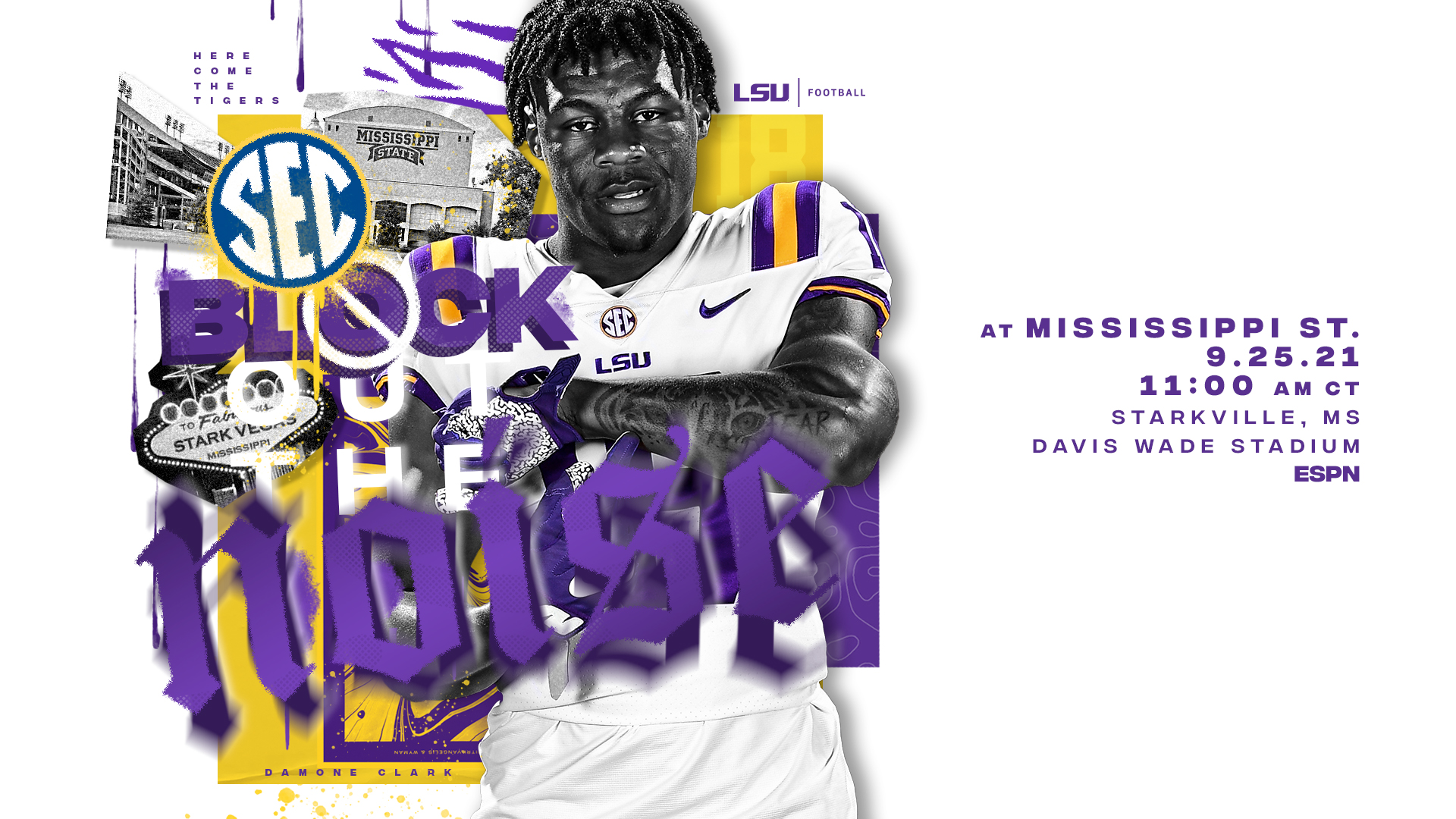 After consecutive victories, LSU (2-1) hits the road to open up SEC play against Mississippi State (2-1) on Saturday morning in Starkville.

Kickoff is scheduled for 11:07 a.m. CT on ESPN and the LSU Sports Radio Network.

It will be an early start for both squads, but that’s something head coach Ed Orgeron says you have to embrace.

“We have to like it,” said Orgeron on the morning start. “It’s different, it’s a challenge. But we have to play at eleven, and so do they, so you can’t use it as an excuse.”

The Tigers will look to build on Saturday’s complete win against Central Michigan in all phases. It was a youth movement that led LSU to victory as freshman Deion Smith posted a breakout performance with two touchdowns and 135 yards and freshman Jack Bech tallied five catches for 81 yards and a score, too.

On the ground, freshman running back Corey Kiner showed he can be a dynamic rusher with 74 yards and a touchdown on 12 carries.

The Tigers will also be getting some reinforcements on both sides of the ball as Orgeron said Thursday that he expects to get safety Jay Ward, defensive end Ali Gaye and running back Armoni Goodwin back for Saturday.

“Handling the noise, taking care of the football — we have to be very smart with it,” said Orgeron on the keys the victory. “Eliminate the explosive plays on defense. Continue to make the progress that we’ve made on offense.”

Focus is the calm before the storm pic.twitter.com/HMG0l8931R

The LSU offense wanted to go faster, and take more deep shots down the field, and they executed both behind Johnson and those freshmen receivers. Johnson became the third quarterback in LSU history with five-plus touchdown passes in a game, joining Joe Burrow and Zach Mettenberger, capping off a career night for the sophomore.

Johnson’s confidence is growing with each start, something he credits his teammates, but also his play callers for in his growth.

LSU’s defensive line has been dominant through three games, leading the nation in sacks (17.0), sack yards (118), sacks per game (5.68, tackles for loss (40.0) and tackles for loss yards (161). But in order for the Tiger pass rush to be effective on Saturday, Orgeron says, they must make the Bulldogs hold the ball.

“We want to create the juice, we want to make all the plays,” said sophomore defensive end BJ Ojulari, who has a team-leading 4.5 sacks. “We want everybody to feed off our energy. When the defensive line is going, the defense is going.”

“I feel good about our pass rush,” Orgeron added. “But they get rid of the ball in 2.5 seconds, you have to be very fast to get there. In order for us to get sacks, we’re going to have to make them hold the ball a little bit.”

Tackling in space was another bright spot from Saturday as 19 different Tigers recorded a tackle. Not many were missed the entirety of the night. A trio of linebackers led the team in tackles, as seniors Damone Clark, Micah Baskerville and sophomore Navonteque Strong recorded six a piece.

Mississippi State is led by sophomore quarterback Will Rogers, who has a 74.8 completion percentage through three weeks, with eight touchdowns under his belt. Receivers Makai Polk and Jaden Walley have recorded 226 yards and a touchdown and 166 yards and three touchdowns, respectively.

“They have athletes all over the place,” Orgeron said on Mississippi State. “They know how to throw the football, they know how to dissect defenses. It’s going to be a big challenge.”

Davis-Wade Stadium is always one of the loudest venues the SEC has to offer, but after a good week of prep, Coach O thinks LSU is up to the task.

Orgeron has talked about taking the next step after both the Tigers’ last two wins, and they have a chance to take their biggest yet on Saturday morning.

So get your coffee ready.