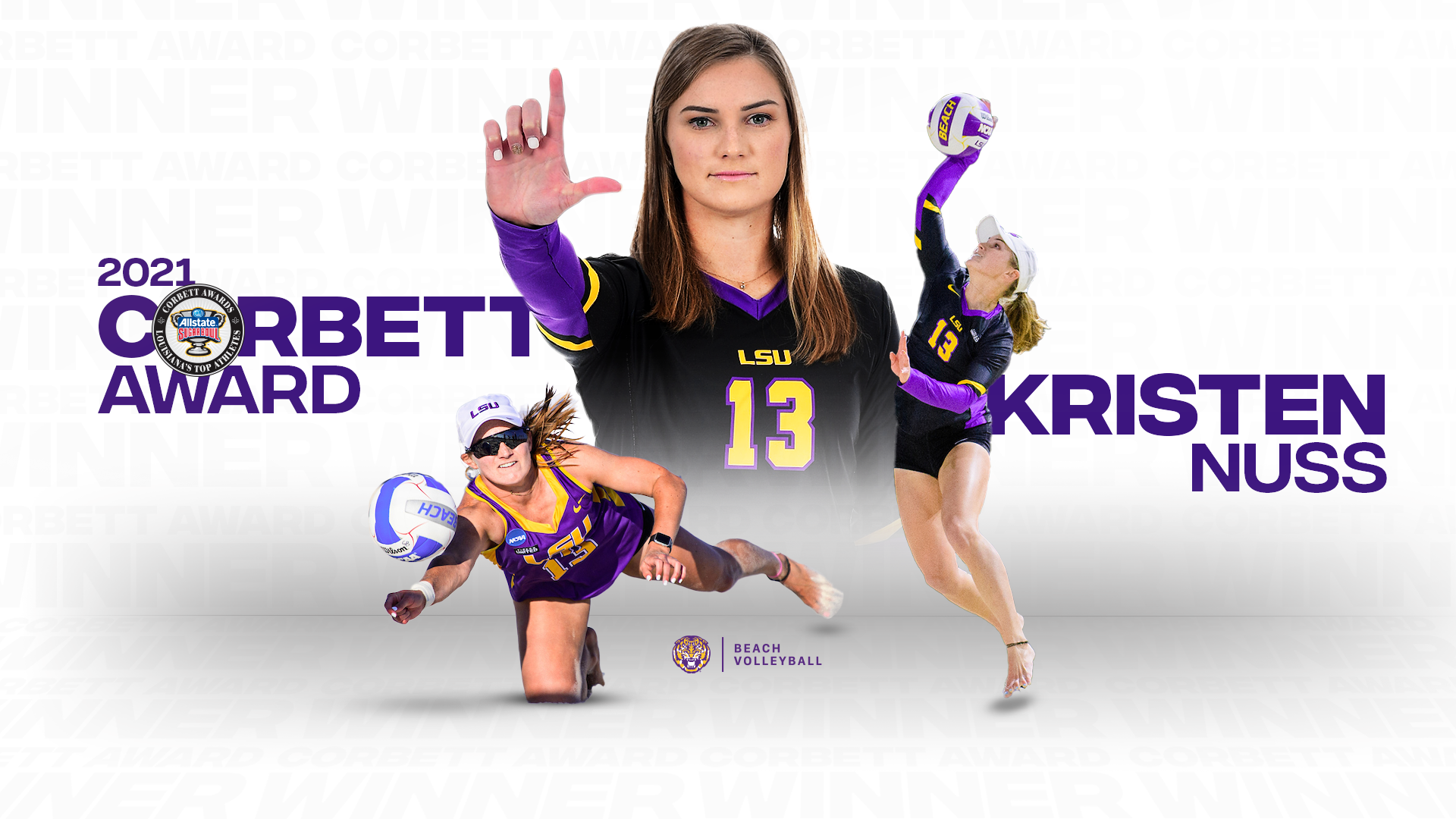 NEW ORLEANS – Kristen Nuss of LSU Beach Volleyball was named the Corbett Award Winner on Tuesday by the Allstate Sugar Bowl as the top amateur athlete in the state of Louisiana.

Nuss is the fifth straight female athlete from LSU to earn the Corbett Award.

“I am very honored to have earned the Corbett Award,” Nuss said. “I have been very grateful over the past 5 years to represent the best university. Competing for LSU and representing this great state was always a dream of mine. To have that come to fruition has meant so much to me.

“I am very thankful for my family and coaches for guiding me and supporting me throughout this journey. There are so many more people that I owe a lot of thanks to and to them, thank you! Again, I am very grateful and thankful for this recognition.”

Nuss’ 139 career victories stand alone as the most wins in the history of college beach volleyball. She was a dominant force in the sand all throughout her college career and she helped lift LSU Beach Volleyball to national prominence. She closed out her incredible career with a 48-match win streak.

Nuss is not your typical beach volleyball player. Standing at just 5-6 she is not as tall as one would expect a beach volleyball star to be. She makes up for her lack of height with a great physical prowess that allows her to glide across the sand to get to hard to reach balls and explode out of the sand to be a dominant player at the net. She also excels in the mental part of the game, understanding where to position herself on defense and reacting with quick reflexes to get to balls anywhere on the court.

“Kristen will always be tied to our rise as a program which really mirrors her pathway as an athlete,” said coach Russell Brock. “She came in relatively unknown with a lot of potential and she walked out of here as somebody that everybody around the country knows as one of the best who’s ever done it.”

The New Orleans native who grew up with dreams of playing a sport at LSU is leaving as a beach volleyball legend . Throughout the first four years of her career, Nuss paired up with Claire Coppola on Court 1 and together they helped set the standard of what LSU Beach Volleyball could become.

As freshmen together in 2017 Coppola and Nuss won 27 matches. They improved their win totals in each of the next two seasons, winning 31 matches in 2018 and then 33 in 2019. Their rise as a pair coincided with LSU’s rise as a program as the Tigers reached their first NCAA Championships as one of the final eight teams in the country in each of those three seasons.

They were 12-2 in 2020 and had become just the third college beach pair to surpass 100 career wins together as a duo when the season came to an abrupt end amidst the COVID-19 pandemic. When the season was called, LSU was the undisputed No. 1 team in the nation.

Nuss paired up with Taryn Kloth in her added year of eligibility after the two of them began training together throughout the offseason proving to be a dominant duo. They went on to put together one of the single greatest college beach volleyball seasons ever by a pair.

Kloth and Nuss were unstoppable in 2021 as they went 36-0 on Court 1, proving to be too much to handle for anybody that stepped in the sand across from them. USC’s Kelly Claes and Sara Hughes were the only other pair to go 36-0 on Court 1 in 2016.

After their dominant season, Kloth and Nuss were named the first ever AVCA Pair of the Year and also claimed the same honor from VolleyballMag. Kloth and Nuss announced in May that they will pursue a professional beach volleyball career together.

Since their announcement, Kloth and Nuss have won both professional tournaments they have entered.

The Corbett Award was created in 1967 and named in honor of the late James J. Corbett to commemorate his many contributions to intercollegiate athletics and specifically to the Sugar Bowl. At the time of his death, Mr. Corbett was the Athletic Director at Louisiana State University. These awards are presented annually to the most outstanding amateur male and female athletes in the State of Louisiana. The Corbett recipients are selected each year by members of the N.O. Sports Hall of Fame Committee, based on nominations submitted by the state’s sportswriters, sportscasters and sports information directors.