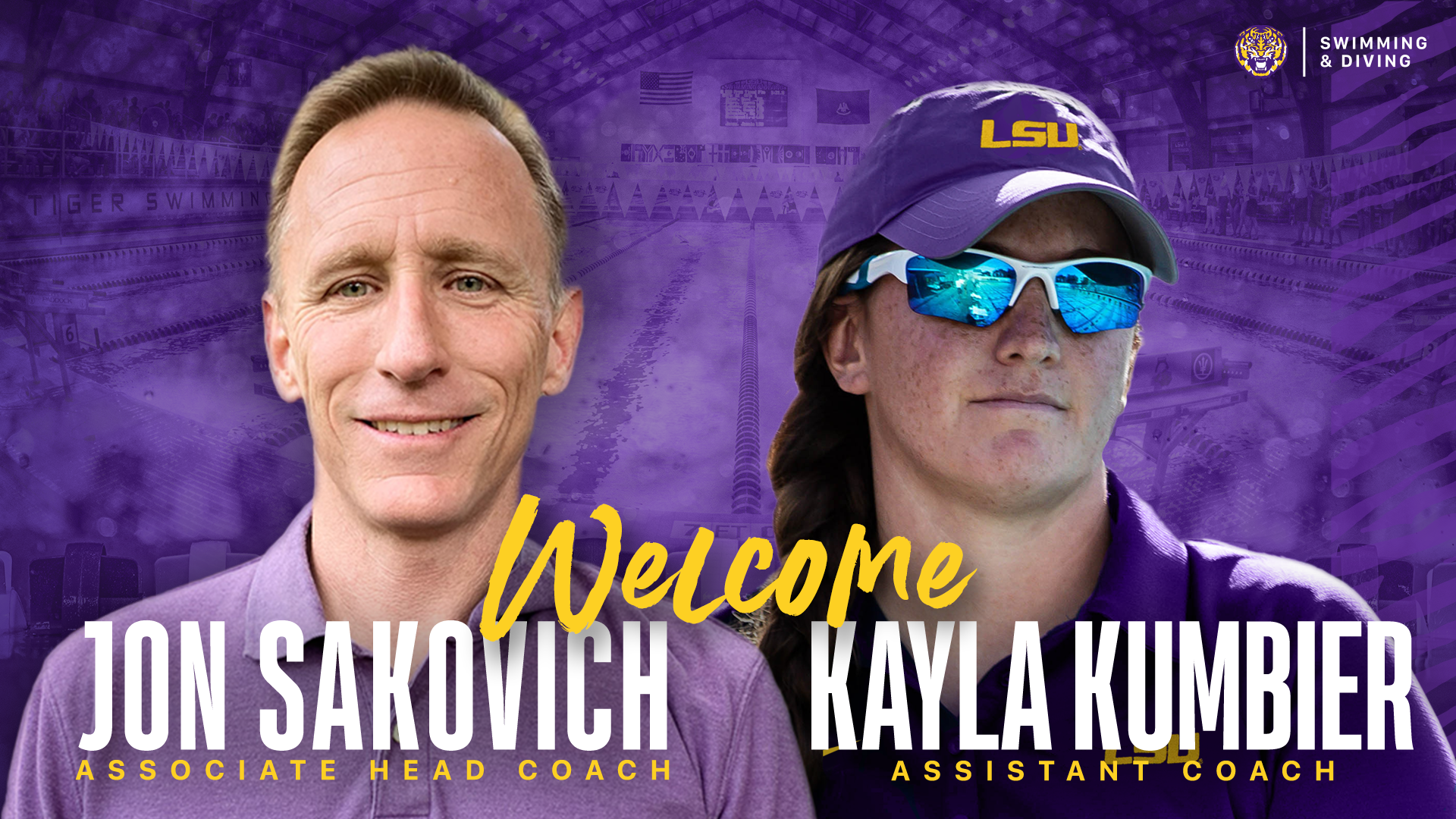 Sakovich will serve as an associate head coach alongside Steve Mellor, who will remain on Bishop’s swimming staff in the 2021-22 season. Sakovich comes to LSU after serving as an assistant swim coach at Lakeside Aquatic Club in Flower Mound, Texas.

“I am honored and excited to be part of the LSU Swimming and Diving program and the LSU Athletics family,” Sakovich said. “Working with the talented student-athletes and alongside the amazing coaching staff is an opportunity I could not pass up.”

Before arriving at Lakeside, Sakovich spent 19 seasons at the Bolles School, similarly to Bishop, who spent four years at the private college preparatory day and boarding school. Sakovich began his stint in Jacksonville as a senior assistant swim coach. During his tenure, he was awarded with several promotions that led to him being named the head swim coach and aquatics director in February of 2015.

“I am very excited to have Jon join us in Tiger Country,” Bishop said. “Jon is an outstanding coach who, while at the Bolles School, continued the traditions of that national powerhouse high school program. Jon is recognized as one of the most accomplished high school and club coaches in the United States.”

Throughout his career, Sakovich has coached 10 USA Olympic Trial qualifiers and over 45 USA Swimming National qualifiers, both at the senior and junior level. He was named the 2016-17 Coach of the Year by the National Federation of High School Coaches.

“His own background as an Olympian, U.S. National Team member and outstanding age group coach have given him insights into truly understanding a championship mindset and what it takes to achieve at the highest levels of swimming,” Bishop said. “Jon’s knowledge, passion and compassion for his swimmers will make him an outstanding addition to the Tiger Swimming staff.”

In 1997, Sakovich earned his bachelor’s of science in recreational sciences at the University of Florida while he began his career in coaching for the Clearwater Aquatic team. He recently received his master’s degree in education, sport coaching and pedagogy in 2019 at the University of Ohio at Athens.

“I look forward to helping continue the traditions of success that LSU athletes are known for,” Sakovich continued, “both in their sport and in the classroom.”

Kumbier will serve as an assistant coach alongside Lyle Robelot, who will be retained to complete Bishop’s impressive staff. She comes from the University of San Diego, where she served as an assistant coach. Prior to her time at USD, she spent two years at the University of California at San Diego as the lead coach for the middle-distance group, recruiting coordinator and alumni and parent liaison.

“I am honored and immeasurably grateful to be given this opportunity to coach alongside Rick and the rest of the LSU staff!” Kumbier said. “Rick has a powerful vision for the program, and I look forward to helping the Tigers build on the momentum of the championship culture at LSU with him at the helm. A special thank you goes out to the head coaches who have sharpened me along the way, especially David Marsh, Marko Djordjevic, Mike Keeler, and Nathan Owens. Geaux Tigers!”

As a volunteer assistant at MSU-Mankato, Kumbier worked with the sprint, freestyle and butterfly specialists. When she arrived at Allegheny College, her role expanded to coaching and designing workouts for swimmers who specialized in sprint, middle-distance, and distance events.

Kumbier coached several NCAA qualifiers and All-Americans at the Division II level when she was at UC-San Diego. A handful of qualifiers and All-Americans represented MSU during her tenure. Kumbier assisted in coaching the 2020 Men’s 50 free NCAA Champion, Women’s NCAA 200 IM runner-up and the 2019 and 2020 NCAA Women’s 200 Medley relay runner-up.

“Kayla will be a great addition to the Tiger coaching staff and she will bring boundless energy to the Tiger Swimming program,” Bishop said. “Her enthusiasm and passion has made an impact on each of the teams that she has worked with previously. Kayla is a tireless recruiter who has worked within all levels of college swimming.”

“As we move forward into the next chapter of Tiger Swimming, Kayla will have a great impact on developing athlete performances, strengthening our culture and helping to build Tiger Champions,” Bishop said.

Sakovich and Kumbier join Bishop in Baton Rouge, who was named head coach of the swimming program on June 24. Bishop is currently serving as the head coach for the Hong Kong Olympic team.

The hiring of Sakovich and Kumbier is pending a background check.