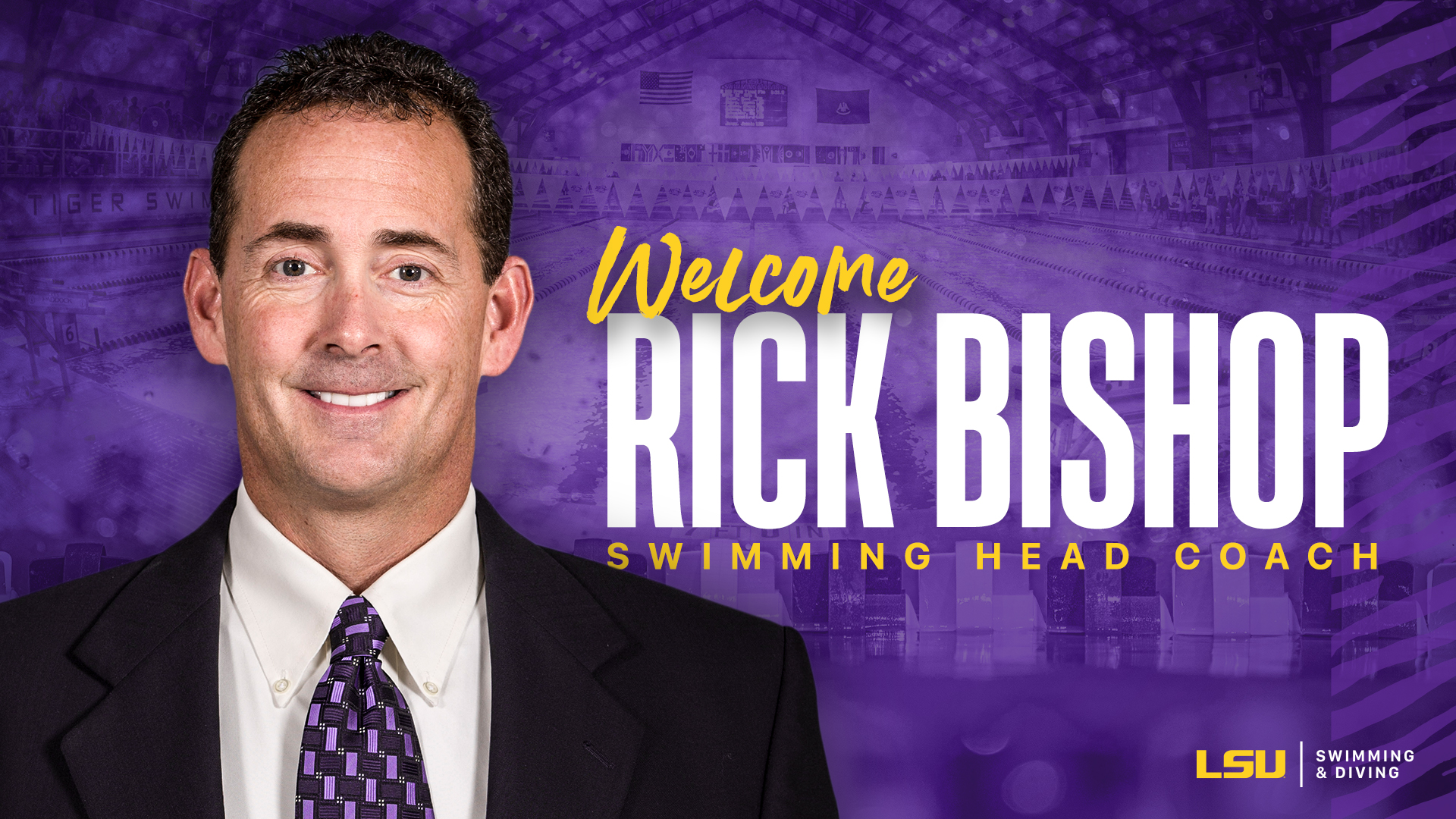 “I am honored for the opportunity to lead LSU Swimming,” Bishop said. “The rich tradition of national championships and SEC championships at LSU Athletics coupled with the athletics department leadership makes LSU a national leader in NCAA sports. LSU’s recent success at Olympic trials will continue to move the program forward. It’s an exciting time with LSU Olympians in both swimming and diving.

“When I arrived in Baton Rouge I was blown away by the beautiful campus, the palpable energy and commitment to academics. Scott Woodward, Stephanie Rempe and John Daniel are truly impressive, and their commitment to the department is outstanding. I look forward to the future of LSU Swimming and Diving as we move into the next chapter. Geaux Tigers!”

Current LSU Associate Head Coach Steve Mellor will also be part of Bishop’s swimming staff in the 2021-22 season. Mellor, who has coached Olympian Brooks Curry for the past two seasons, enters his ninth season at LSU. On June 17, Curry became the first LSU swimmer in program history to qualify for the Olympics while representing the United States.

Bishop has spent the past nine seasons as associate head coach at the University of Michigan and has experience in both collegiate and international competition as a coach. At Michigan, he built the women’s team from the ground up and turned the program into a national powerhouse. Bishop has also been tabbed as the Hong Kong national team coach and will lead the nation’s program at the 2020 Tokyo Olympics this summer.

“Rick’s vision for developing a championship-caliber swimming and diving program here at LSU aligns perfectly with ours,” Woodward said. “He has extensive experience at the highest levels of NCAA and international swimming, and he is eager to engage our student-athletes, alumni, and fans as we compete for SEC and national championships in the pool. We’re excited to welcome him and his family to Baton Rouge.”

During Bishop’s tenure, the men’s team reached the pinnacle of the sport as the 2013 NCAA Champions. The Wolverines were Big Ten Champions from 2013-16 and took the title again in 2020 and 2021.

The women’s team also flourished and saw dramatic improvements on the recruiting trail and in the pool, jumping 26 places at the NCAA Championships in three years from 36th in 2013 to 10th in 2016. Under Bishop’s guidance, three recruiting classes finished in the top-10. The Wolverines won three consecutive Big Ten titles from 2016-18 and tallied runner-up finishes from 2019-21. At the NCAA Championships, the women’s team has finished as high as third in 2019, along with a fourth-place finish in 2018 and sixth-place finish in 2021.

Bishop’s swimmers completely rewrote the record book, breaking 19 school records (in short course yards), including 15 since 2018. Bishop coached Maggie MacNeil, one of the most accomplished swimmers in Michigan history, to the 2021 100 free and 100 fly NCAA titles. She also won Big Ten Swimmer of the Year twice and is a 14-time Big Ten champion and 19-time all-American.

Prior to serving on the Michigan staff, Bishop spent four years with USA Swimming. Bishop’s role with USA Swimming expanded every year after his arrival in Colorado Springs in 2008, including serving as a sport performance consultant for the Club Development arm of USA Swimming for two years before moving on to the national team in 2010. There, Bishop was performance support manager for one year (2010-11), managing the national team performance staff at the 2010 Short Course World Championships in Dubai. Bishop was Manager of Coach Services and Education (2011-2012), where he was responsible for choosing the 2013 World University Games team.

Over his 20-plus years as coach, Bishop has garnered significant international experience. He spent two years on the Brazilian National Team coaching staff, first serving as an assistant coach at the 1995 World Championships in Rio de Janeiro and 1995 Pan-American Games in Mar del Plata, Argentina, before heading up the Brazilian Olympic Team at the 1996 Summer Games in Atlanta. He also served as an assistant coach for Jamaica at the 1998 Pan-American Games in Winnipeg and was the head coach for the Netherlands Antilles at the 2007 World Championships in Melbourne, Australia.

Bishop began his coaching career by serving a three-year stint as an assistant men’s swimming coach at Harvard (1988-91) before moving to the University of Memphis Tiger Swimming (MTS) Club (1992-96), where he coached six swimmers to the Top-50 of the world rankings between 1994 and 1995.

In 1998, Bishop moved to Jacksonville, Fla., where he began a four-year stint as an assistant coach for The Bolles School, a private college preparatory day and boarding school. He assisted with high school national championship and state championship teams, coached high school all-Americans and U.S. Nationals finalists, and was co-Director of The Bolles School Summer Swim Camps.

He went on to serve as head coach and aquatics director at the Baylor School in Chattanooga, Tenn., beginning in 2002, and also served as program director for the Baylor Swim Club, the school’s club team. In 2004, Bishop guided Baylor to a first-place finish (combined team) at the Tennessee State High School Championships, and coached 20 men’s and women’s all-Americans from 2003-04.

Bishop returned to The Bolles School in 2006 as head coach of the high school team and aquatics director of the club team, the Bolles Sharks. In his first year, both his boys and girls teams won the Florida High School 1A State Championship. The next year, in 2007, Bishop guided Bolles to a second-place finish at the 2007 USA Swimming Spring Championships (combined team), with Bishop guiding four Olympic Trials qualifiers and five swimmers ranked in the Top 105 in the world rankings.

Bishop attended the University of Massachusetts (1988), receiving his bachelor of science in exercise science, with a concentration in exercise physiology. At UMass, Bishop was team captain on the first team championship in the program’s history in 1987.

Bishop and his wife, Pamela, have three sons – Liam, Aidan, and Kilian.