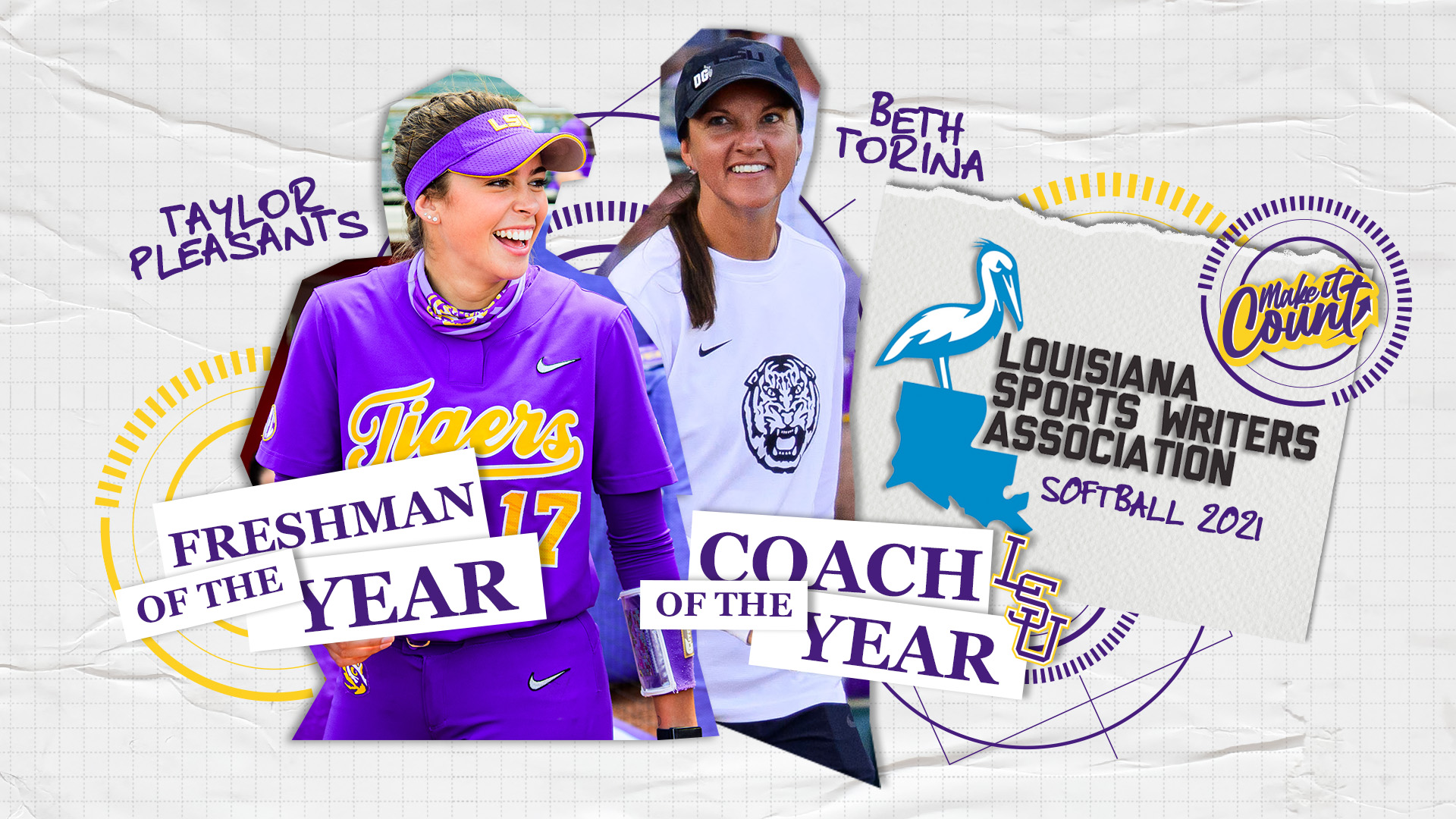 Tiger shortstop Taylor Pleasants earned Freshman of the Year honors in the state and Beth Torina captured her second state Coach of the Year award.

A Louisiana Sports Writers Association panel of sports media and college softball publicists selected the All-Louisiana team, based on statistics and performances through the teams’ conference tournaments. Those statistics were used in this story. There was no All-Louisiana team in 2020 because the COVID-19 pandemic shortened that season.

Summer Ellyson of UL-Lafayette repeated as Pitcher of the Year – she also won in 2019 – and Ragin’ Cajun Ciara Bryan, a transfer from the University of Georgia was chosen as the Hitter and Newcomer of the Year.

Pleasants, from Houston, hit .314 with 11 home runs and 47 RBI. She slugged .591 and helped LSU reach an NCAA Tournament super regional for the sixth consecutive time. Pleasants is LSU’s sixth Freshman of the Year and its first since 2014.

Torina reached 400 career LSU victories during the season, her 10th with the Tigers. LSU racked up nine regular-season wins against ranked opponents, two apiece against UL-Lafayette, Texas, Tennessee and Missouri. LSU was 32-19 entering NCAA regionals and finished 35-22 after a pair of one-run losses to Florida State — the eventual national runner-up to Oklahoma — in the Baton Rouge Super Regional.

Ellyson — from Lafayette, La., and a three-time All-Louisiana first-team selection — was 23-6 with a 2.22 ERA, nine shutouts and 173 strikeouts in 167 innings. Including NCAA Tournament games, Ellyson was 25-7 and finished No. 3 on the Ragin’ Cajuns’ career victories list with 99. Ellyson is the fifth person and the third from UL Lafayette to win Pitcher of the Year multiple times.

Bryan, from Covington, Ga., hit .426 with five home runs, 37 RBI and 35 stolen bases in 38 attempts. She slugged .601 and had an on-base percentage of .469. She reached base safely in each of her first 39 games. Bryan is the second to win two All-Louisiana major awards in the same season; Lexie Elkins (hitter, newcomer) of UL Lafayette did it in 2014.

Joining Ellyson and Bryan for the Cajuns are Justice Milz at first base and Jade Gortarez at second base. The remainder of the first team consists of pitcher Whitney Tate and designated player Kaylee Lopez of McNeese, catcher Olivia Hennen of LSU-Eunice, outfielder Aeriyl Mass of Southeastern Louisiana and utility player Uchenna Jong Loy of Bossier Parish Community College.

Leading the second team is UL Lafayette with five selections: pitcher Kandra Lamb, Kaitlyn Alderink at third base, Alissa Dalton at shortstop, Kendall Talley in the outfield and Julie Rawls at utility.

Also, on the second team are Bossier Parish’s Primrose Aholelei at pitcher, Samantha Eckert at catcher and Haylee Ladner at first base; LSU’s Shelbi Sunseri at pitcher and Ciara Briggs in the outfield; Northwestern State’s Cayla Jones at second base and E.C. Delafield at designated player; and Southeastern Louisiana’s Audrey Greely in the outfield.

(season statistics do not include NCAA, NAIA or NJCAA national tournament games)