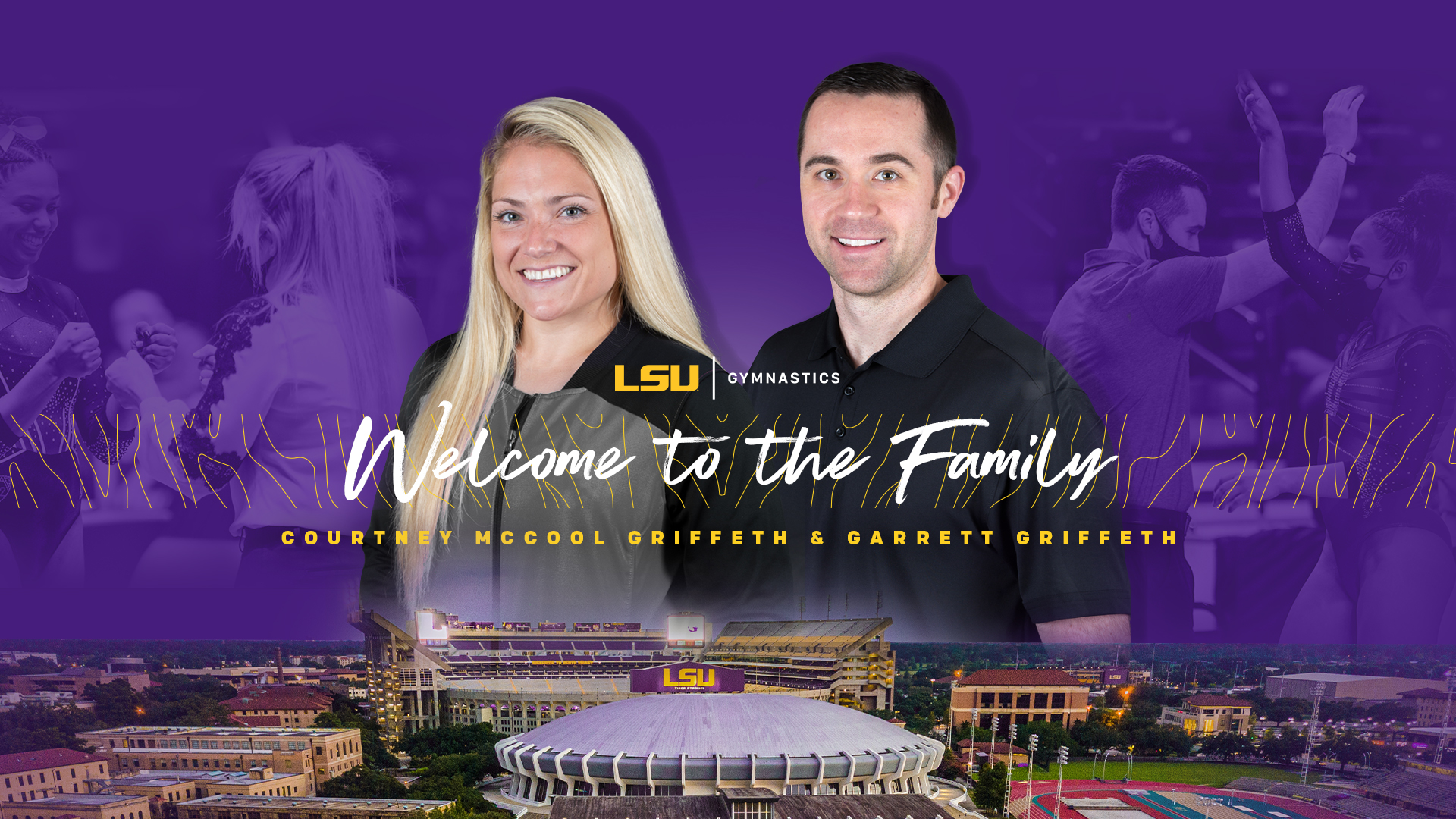 “Garrett and Courtney come in and check all the boxes for this program,” Clark said. “They are two assistants who can coach, recruit and participate in all aspects of LSU Gymnastics.. They are both personal coaches who care deeply for every student-athlete. Their energy is infectious and character is impeccable.”

The Griffeths come to Baton Rouge after serving as assistant coaches for two seasons at the University of Utah. In that time, the Utes went 21-1 during the regular season, won the 2021 Pac-12 Championship and finished third nationally after advancing to the NCAA Championship Final.

“I’m so thankful for our experience over the last few years coaching at the University of Utah,” Courtney said. “The passion and legacy of the LSU Gymnastics program is undeniable, and I have the highest level of respect for Jay and all that he’s accomplished in his career. Being one of his former athletes, I look forward to this tremendous opportunity to get to coach alongside of him.

“I am excited to pour my heart into this team and the program that D-D (Breaux) has built over the course of four decades. I can’t wait to get to Baton Rouge and feel the roar of the 13,000 LSU strong in the PMAC on Friday nights.”

Utah Gymnast Mailie O’Keefe won the NCAA floor championship and was named the Pac-12 Gymnast of the Year under McCool Griffeth. O’Keefe and Sydney Soloski were also named All-Americans on floor in 2021. Under Griffeth, the Utah vault lineup finished in the top-10 of the national rankings both years with a pair of All-Americans. For their work, Garrett and Courtney were named the WGCA Region 2 Assistant Coaches of the Year in 2020.

“I want to thank Jay, Stephanie (Rempe) and Scott (Woodward) for this tremendous opportunity to join the LSU Gymnastics family,” Garrett said. “I am grateful for the time we spent on staff at Utah the past few years where we learned a great deal. The tradition at LSU is unmatched, and it is an honor to follow in the footsteps and continue the work of legendary coaches like D-D and Bob (Moore). The pride and passion of the LSU people and culture are unrivaled and we are very excited to be a part of it.

“I have the upmost respect for Jay and Ashleigh (Gnat), and Courtney and I look forward to working together with this staff and team to bring a National Championship home to Baton Rouge.”

Prior to their time in Salt Lake City, Garrett served as the associate head coach and Courtney the volunteer coach and choreographer for two seasons at Arkansas. They spent four seasons at Texas Woman’s University from 2014-17 and prior to that coached at Cincinnati Gymnastics Academy in 2013.

In their first season at Arkansas, the duo helped the Razorbacks advance to the NCAA Championships for the first time in five seasons in 2018. Griffeth, who coached a vault All-American in Braie Speed. McCool Griffeth coached and choreographed Sophia Carter to regular season All-America honors on floor and Carter qualified as an individual competitor into the 2019 NCAA Championships. The Razorbacks set several school records from 2018-19 and achieved a program first with consecutive fifth-place SEC finishes.

They previously coached four seasons at TWU, where Griffeth was the 2014 Coaches Association Division II Assistant Coach of the Year and the 2017 Midwest Independent Conference Assistant Coach of the Year. He coached 16 USAG All-Americans on vault and bars, a USAG national bar champion and two USAG bar runners-up. McCool Griffeth coached two USAG national floor champions. In their last season at TWU, the Pioneers won the 2017 USAG National Championship.

Both earned bachelor and master’s degrees from Georgia, where Griffeth served on Clark’s staff as a graduate assistant coach in 2011 and an administrative associate in 2012. McCool competed at Georgia from 2007-10, helping the GymDogs to three consecutive NCAA titles from 2007-09. She was the 2008 NCAA floor champion. They have two daughters, Rae and Blakely

“They fit perfectly in the culture of ‘investment in one another’ that we have created here at LSU over the years,” Clark added. “Along with Ashleigh (Gnat), Katie (Copeland), Jenny (Cihonski) and myself, we have a staff that is completely and fully invested in the success of our program. I believe recruiting them to be a part of this program is a crucial piece for our drive toward winning championships here at LSU and our fans.”

The Griffeths join Clark and Gnat in Baton Rouge to complete one of the top staffs in the nation. Clark, who enters his second season as the head coach of the Fighting Tigers, owns more than 30 seasons of experience in collegiate gymnastics. Gnat is in her second full-time season at LSU. One of LSU’s top student-athletes, she won the 2017 NCAA floor title.