Tennessee erased a 2-1 deficit with three runs in the bottom of the sixth inning Saturday night, and the Volunteers defeated LSU, 4-2, in Game 1 of the NCAA Super Regional at Lindsey Nelson Stadium. 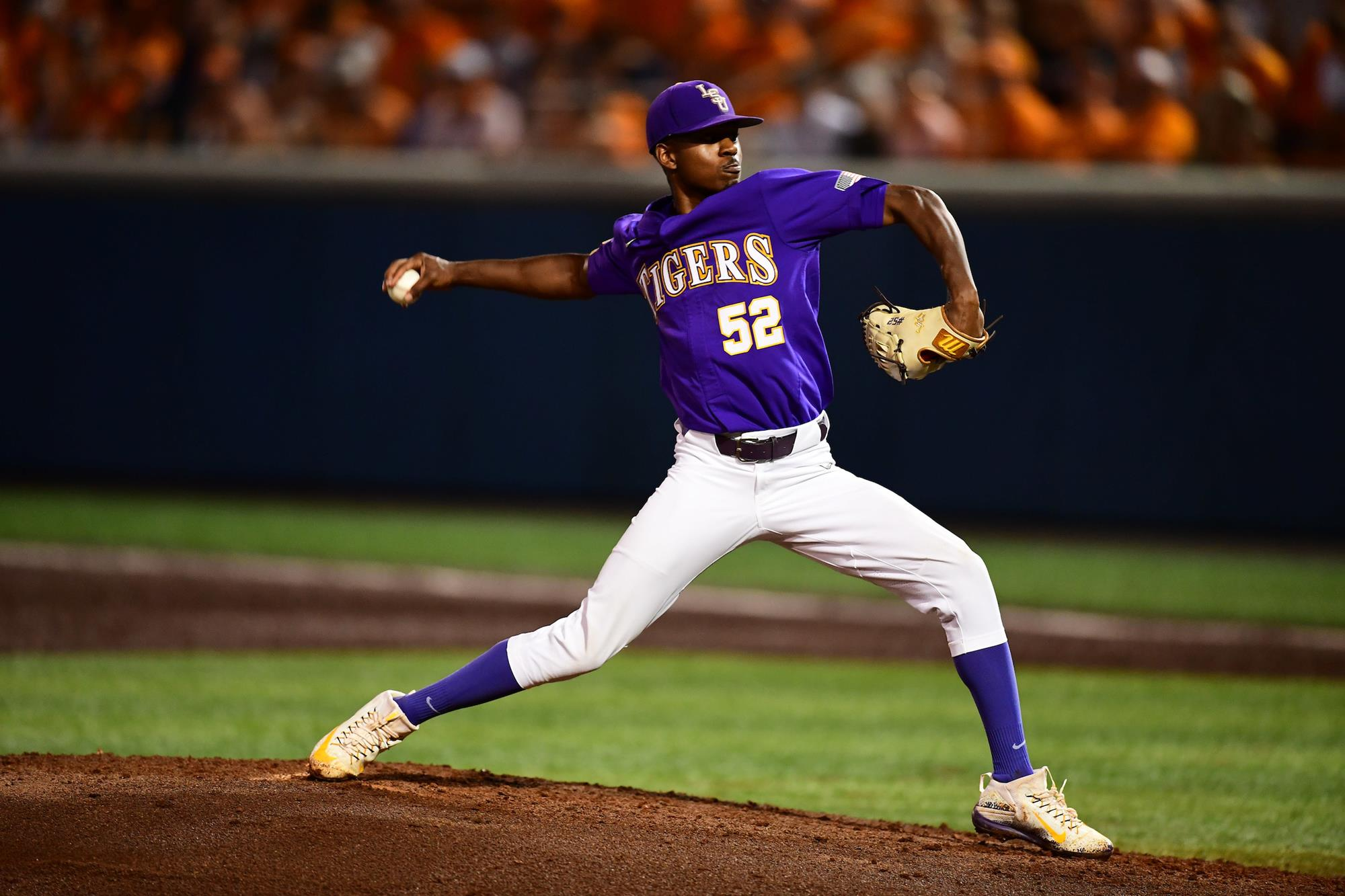 KNOXVILLE, Tenn. – Tennessee erased a 2-1 deficit with three runs in the bottom of the sixth inning Saturday night, and the Volunteers defeated LSU, 4-2, in Game 1 of the NCAA Super Regional at Lindsey Nelson Stadium.

Tennessee improved to 49-16, while LSU is now 38-24 on the year. The teams will meet in Game 2 of the series at 2 p.m. CT Sunday in a contest that will be televised on ESPN2 and broadcast on affiliates of the LSU Sports Radio Network.

Tennessee starting pitcher Chad Dallas (11-1) earned the win, limiting the Tigers to two runs – one earned – on five hits in six innings with no walks and a career-high 12 strikeouts.

“It was a great ball game,” said LSU coach Paul Mainieri. “Dallas threw an awful lot of sliders, and we just didn’t have an answer for them. We just had a tough time making contact against him.”

Right-hander Ma’Khail Hilliard delivered an excellent start for the Tigers, limiting Tennessee to one run on three hits in five innings with no walks and six strikeouts.

“Ma’Khail and Javen were both terrific tonight,” Mainieri said. “There was that one crazy inning where there was only one hard-hit ball but Tennessee was able to scratch across three runs.”

Tennessee reliever Sean Hunley picked up his ninth save of the year, firing three shutout innings with three hits, no walks and four strikeouts.

LSU opened the scoring in the top of the second inning when third baseman Cade Doughty launched a solo homer, his 13th dinger of the year.

Tennessee tied the game in the bottom of the third when rightfielder Jordan Beck doubled, moved to third on a groundout by designated hitter Pete Derkay and scored on catcher Connor Pavolony’s RBI grounder.

LSU regained the lead in the fifth when centerfielder Drew Bianco singled, moved to second when DH Cade Beloso was hit by a pitch, advanced to third on a stolen base and scored when Pavolony’s errant throw to third skipped into left field.

LSU threatened in the ninth with runners at second and third with two outs, but Hunley struck out shortstop Jordan Thompson to end the game.

“We had a chance there in the ninth,” Mainieri said, “but we just couldn’t get the hit to tie the ball game. A tough loss, but we just have to put it behind us and get ready for tomorrow.”