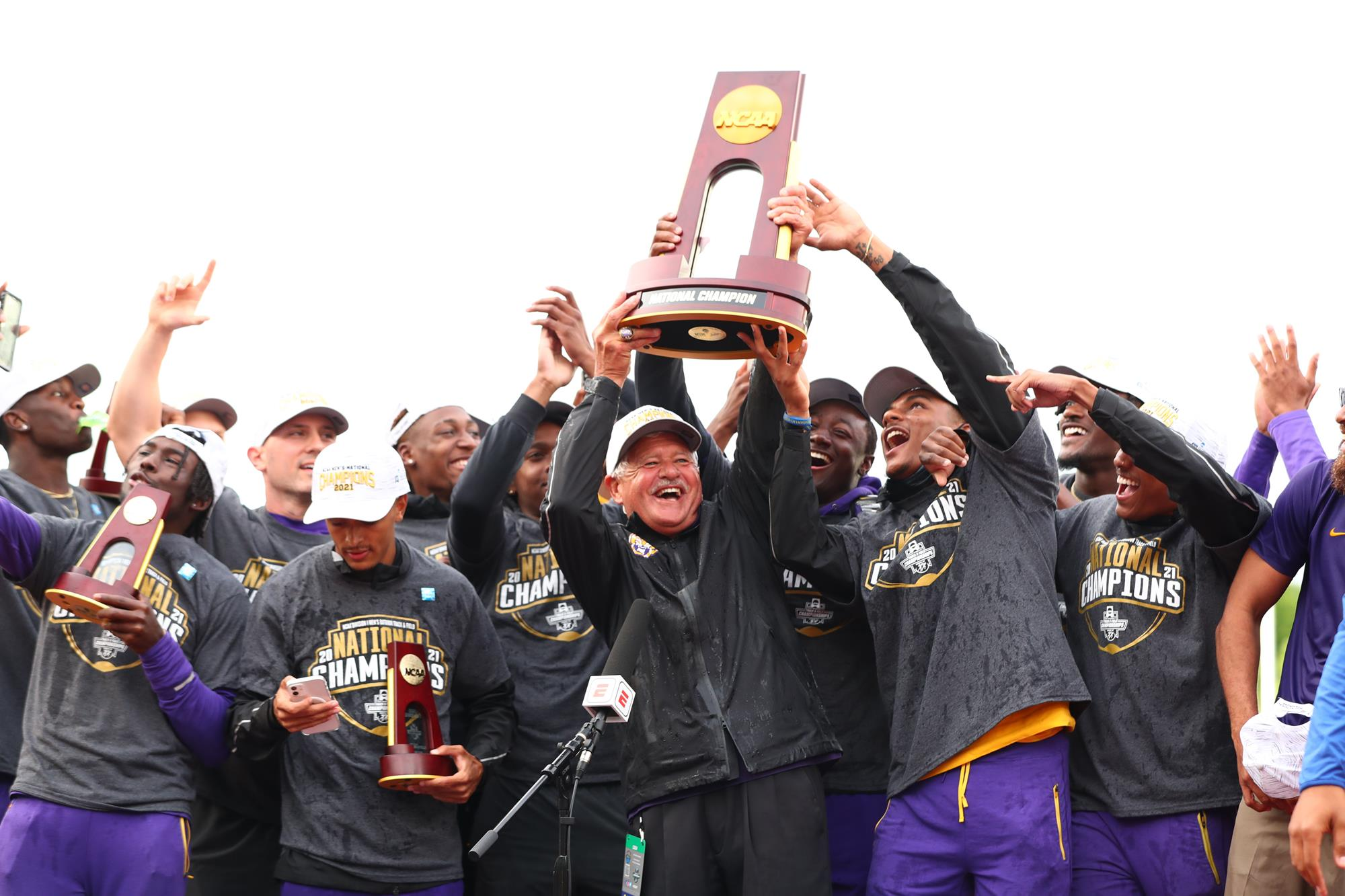 “It means a lot because there have been so many times we’ve been second at this meet,” Shaver said after the victory. “To be able to win it is pretty exciting. We came out here and dominated the meet in a lot of ways and that made it special for us.”

We’ll start with the best to ever do it in the long jump/high jump combo in world history, JuVaughn Harrison. Harrison wowed the crowd and won his sixth straight NCAA title with a clearance of 7′ 7.75″ (2.33 meters). It wasn’t a perfect day, but he got the job done and secured his 20th point of the meet for the Tigers. Going back to NCAA comps since the 2019 outdoor meet, he’s 6-0 between the long jump and high jump. In 2019, he became the first man in NCAA outdoor meet history to sweep the long jump and high jump national titles. He’s now done that at three straight meets – 2019 NCAA outdoor, 2021 NCAA indoor, 2021 NCAA outdoor – to stake claim as one of the best jumpers in NCAA history. The six NCAA titles rank Harrison No. 3 on the all-time LSU list for national titles won behind Xavier Carter (7) and Kelly Willie (7); it also ties him with Walter Davis.

“I’m very proud of my team and what we came out here and did,” Harrison mentioned. “We’ve got a lot of dudes on this team that excel in their events. So to see us score the points we did and win in the fashion we did, it’s something we’ll never forget.”

Sean ‘Squirrel’ Burrell won his first career national title on Friday with a world U20 record time of 47.85. So let us point out that this has been an event contested since 1900 and no U20 athlete in world history has ever run faster. In fact, Burrell became the first U20 athlete to crack 48 seconds in the event as the previous U20 world record was 48.02 by Danny Harris June of 1984 . The time of 47.85 moved Burrell up to No. 4 on the all-time collegiate list and it ranks as the second fastest time in LSU history behind his coach, Bennie Brazell (47.67). He’s the third LSU 400 meter hurdler to win an NCAA title in the event.

“It’s an honor to just win my event title,” Burrell said. “I run for my city, Baton Rouge is where I grew up. So to become a national champion at this school means the most to me. I kept preaching to myself that I was gonna go sub 48, and I got out today. I knew I could finish strong and when that time popped up I was like ‘oh yeah.”

We’re five paragraphs in and we haven’t even mentioned the High Point Scorer of the Meet. That would go to Terrance Laird as he dropped 20.5 half points thanks to his national titles in the 4×100 meter relay and 100 meters; he also took second in the 200 meters. Laird was worked to the max on Friday as he ran in three races. He started his day off by chasing down Georgia’s Matt Boling for the win; the LSU relay clocked a time of 38.48 in the event. Laird returned to the track 50 minutes later and stunned the crowd with his late race speed to win the 100 meter national time with a clocking of 10.05 seconds. Laird would go for the sprint triple 45 minutes later in the 200 meters and was narrowly beat out for the top spot as he ran a 19.94 to Joseph Fanbulleh’s (Florida) 19.91.

“We had a razor sharp focus coming into this meet,” Laird said of his team’s performance this week. “We got the ball rolling today with the 4×100 meter relay. The whole day was the LSU show. We talked about doing this and we did. Proud of this group.”

The men’s 4×100 meter relay kicked things off with a dub in the sprint relay. The lineup went Dylan Peebles, Noah Williams, Akanni Hislop, and Terrance Laird as the unit clocked a 38.48 to run away with the event. It’s LSU’s 10th national title in the event and first since 2016.

Noah Williams turned in a time of 44.93 in the 400 meters to take third and add six points to the LSU point total. Freshman Sean Dixon-Bodie went out and PR’d at his first NCAA outdoor meet with a leap of 54′ 6″ (16.61 meters) to take fourth place in the triple jump; the mark is the fifth best in LSU history. The final point scorer of the day for LSU was Damion Thomas in the 110 meter hurdles; he placed eighth with a time of 13.76 for a point.

This team was loaded with potential and they made the most of it to bring home LSU’s first men’s outdoor national title since 2002; they were ranked No. 1 in 9 of 10 ratings polls released throughout the season and will end up as the top team in the land for the 2021 outdoor season. LSU’s other four outdoor men’s national titles came in 1933, 1989, 1990, and 2002. LSU’s 31 point margin of victory is the largest gap since Arkansas won by 38 points in 1994. LSU’s track and field program as a whole – women & men combined – has now won 32 team national titles. LSU’s 84 team points are the third most in the modern era of track and field at the men’s NCAA outdoor meet.