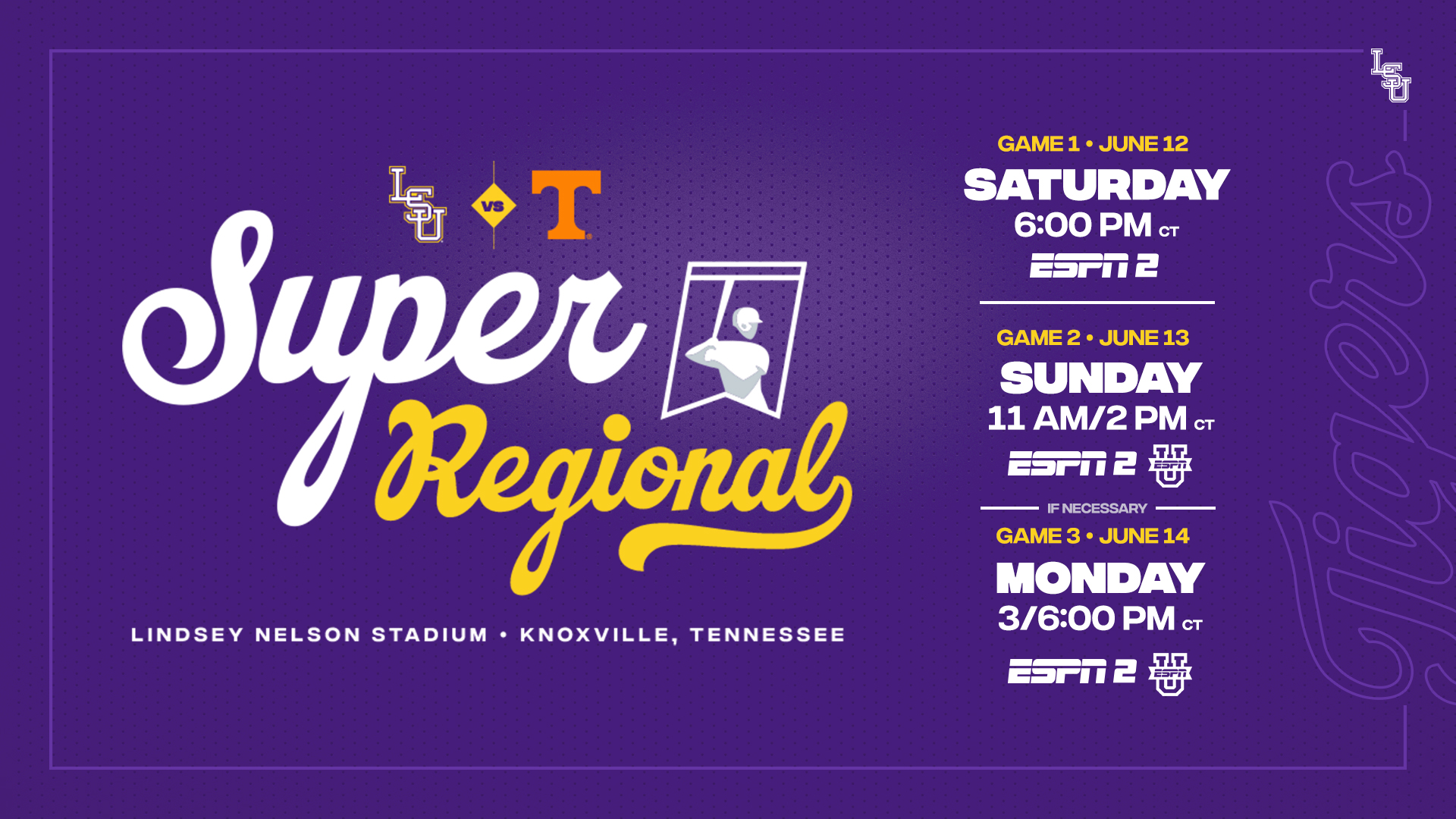 SERIES RECORD VS. TENNESSEE
LSU leads the all-time series with Tennessee, 58-25, and this weekend’s series marks the second meeting between the clubs this season … UT swept a three-game SEC regular-season series from LSU on March 26-28 by a combined total of four runs … the series earlier this season marked the first meeting between the clubs since 2018, when the Tigers swept three games from the Volunteers in Baton Rouge … LSU has won 14 of its last 18 games versus UT.

ABOUT THE TIGERS
LSU is No. 28 in the most recent official NCAA RPI rankings, and the Tigers are No. 3 nationally in strength of schedule … LSU won five of its last seven SEC regular-season series, including the last three in a row … after a 1-8 start in SEC play, LSU was 12-9 over the final seven SEC weekends … LSU won four of its five SEC road series this season … after losing its opening game of the NCAA Eugene Regional, 3-0, to Gonzaga last Friday, the Tigers recorded elimination game wins over Central Connecticut State (6-5 in 10 innings), Gonzaga (9-4) and Oregon (4-1 and 9-8) … LSU’s effort in the Eugene Regional marked the first time in program history that the Tigers won a regional after losing their first game of the tournament … LSU is also one of only four teams since 1999 to win a regional on the road after dropping its first game.

TIGERS IN THE NCAA EUGENE REGIONAL
LSU hit .282 as a team in the regional with 11 doubles, three triples and eight home runs … the Tigers scored 28 runs on 48 hits in five games … LSU’s pitching staff recorded a 4.00 ERA in the regional while limiting opponents to a .234 batting average … the Tigers have allowed nine doubles, one triple and three home runs in five games.

Junior leftfielder Gavin Dugas was named the MVP of the regional, as he hit .438 (7-for-16) with one double, two triples, three homers, six RBI and seven runs. LSU hitters named to the regional all-tournament team included freshman rightfielder Dylan Crews, sophomore second baseman Zach Arnold and freshman shortstop Jordan Thompson …  Crews hit .476 (10-for-21) in the regional with two doubles, one triple, three homers, four RBI and six runs … Arnold batted .412 (7-for-17) in five games with one homer, one RBI and three runs scored … Thompson hit .333 (6-for-18) with two doubles and two RBI.

LSU pitchers named to the all-tournament team included junior right-hander AJ Labas and freshman left-hander Javen Coleman … Labas worked eight innings to defeat Gonzaga in a elimination game on June 6, allowing four runs on six hits with two walks and eight strikeouts … Coleman defeated Oregon as a reliever in the first game of the championship round, limiting the Ducks to one run on three hits in six innings with three walks and six strikeouts.

ABOUT THE VOLUNTEERS
•    Tennessee won the 2021 SEC Eastern Division title with a 2010 league record … the Vols were the runners-up in the SEC Tournament, falling to Arkansas in the championship game … UT played host to the NCAA Knoxville Regional last weekend and defeated Wright State and Liberty (twice) on advance to the Super Regional.
•    Tennessee is hitting .281 as a team with 128 doubles, 12 triples, 92 homers and 71 stolen bases in 89 attempts … the Vols are led at the plate by infielder Liam Spence, who is hitting .346 with 11 doubles, two triples, five homers, 34 RBI and 62 runs scored … four UT players have reached double figures in home runs – first baseman Luc Lipcius (15), outfielder Jordan Beck (14), outfielder Evan Russell (13) and infielder Max Ferguson (12) … outfielder Drew Gilbert  has a team-best 60 RBI.
•    Tennessee has the best cumulative ERA (3.42) among SEC teams – Game 1 starting pitcher Chad Dallas is No. 4 in the SEC in wins (10), and he’s No 9 in the league in strikeouts … reliever Sean Hunley is fourth in the SEC with eight saves, and he’s seventh in the league in ERA (3.04).