Eugene, Oregon  –  JuVaughn Harrison (long jump) and Tzuriel Pedigo (javelin throw) both claimed NCAA event titles on Wednesday night to kick start things for the No. 1 LSU track and field program at the NCAA Championships. It was Harrison’s fifth career national title, while Pedigo earned the first of his career. 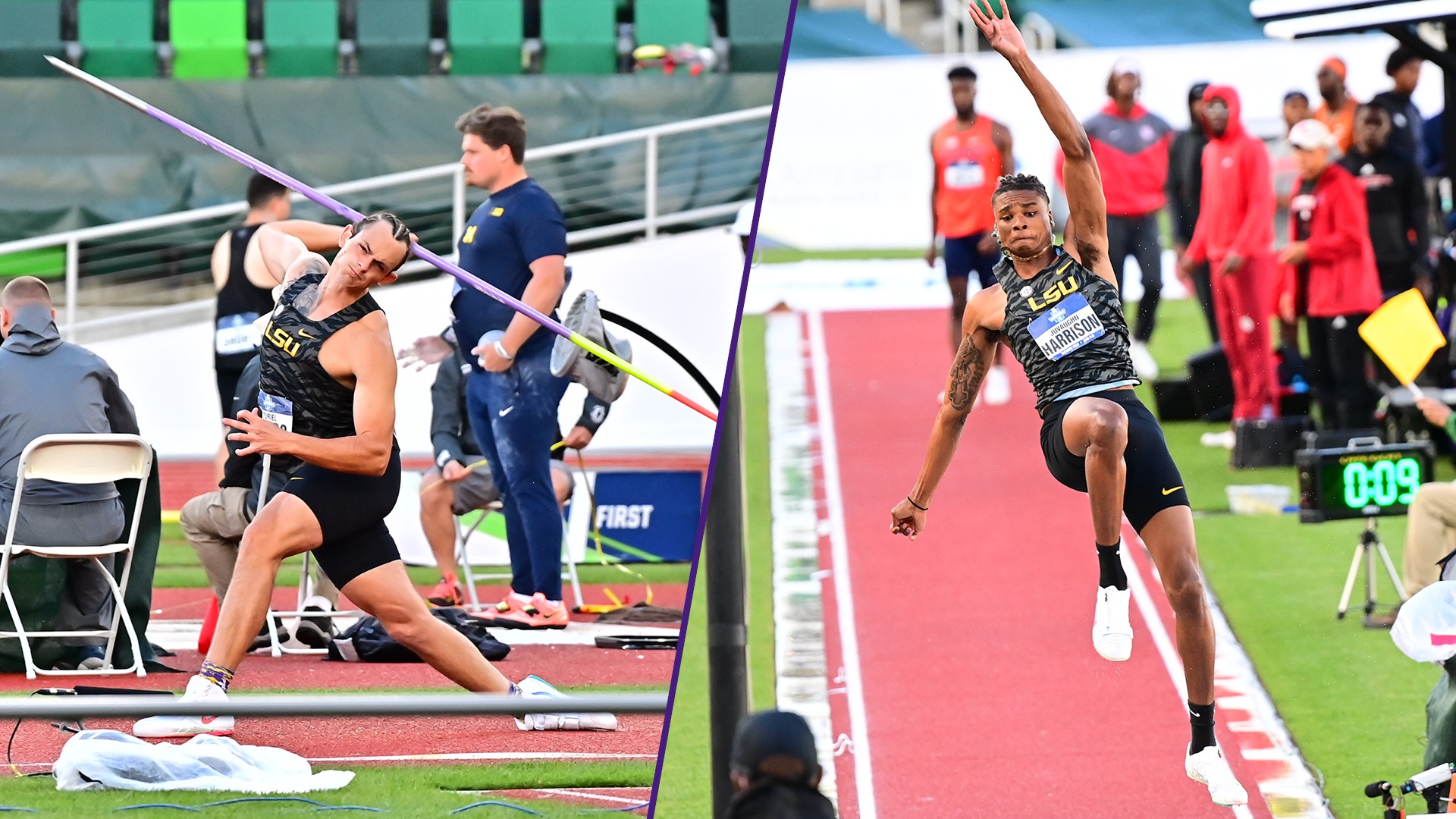 Eugene, Oregon  –  JuVaughn Harrison (long jump) and Tzuriel Pedigo (javelin throw) both claimed NCAA event titles on Wednesday night to kick start things for the No. 1 LSU track and field program at the NCAA Championships. It was Harrison’s fifth career national title, while Pedigo earned the first of his career.

“I think everything came together on the second round jump,” Harrison said after his win. “I ran down the runway well, had good spacing, and then I got myself on the board.

“I was very comfortable today in terms of how I got to focus on the long jump only. That was my main thing today. Now I’ll turn my focus to high jumping on Friday.”

Pedigo used some late event dramatics for his national title. Entering the sixth and final round of throws, Pedigo sat in seventh with a best throw of 241′ 1″ (73.49 meters). That’s when he launched a massive personal best of 252′ 7″ (76.98 meters) to take the lead out of nowhere. He had to wait out a few more remaining throws from other competitors in the meet, but his school record throw of 252′ 7″ stood the rest of the field. Pedigo is LSU’s first national champion in the event since 1967 when Delmon McNabb won it. Pedigo and McNabb are LSU’s only two ever NCAA champions in the javelin.

Down to his last throw, @TrexPedigo launched a massive PR of 252′ 7″ (76.98m) to become LSU’s first NCAA champion in the event in over 60 years! Oh, it’s also the LSU school record as well.#GeauxTigers pic.twitter.com/6pN1zhJx0V

“It’s feels great,” Pedigo mentioned. “I’m glad I could represent my team well. I’m glad I got 10 points for my team. I’m just happy I went out there and got 10 points.”

“I was expecting to do my best – whatever it was today. I felt like I was pushed and that (throw) was a little more than I was expecting. That was a very emotional last attempt. Going down the runway I could never expect that kind of pressure, but I’m glad I pulled throw.”

Jon Nerdal was the first LSU athlete to score at the NCAA championship meet. Nerdal tossed the hammer a near personal best distance of 232′ 6″ (70.88 meters) to earn a seventh place finish and pick up two points for LSU; it was Nerdal’s first time scoring at an NCAA outdoor meet.

Senior Rayvon Grey pitched in two points in the long jump as well to bring LSU’s point total in the event to 12. He used a third round attempt of 25′ 6.25″ (7.78 meters) to move up from 11th to sixth in the standings. After taking three more jumps in the finals, Grey fell one spot into seventh place for his two points.

The men’s 4×100 meter relay took care of things to start LSU’s day on the track. The foursome of Dylan Peebles, Noah Williams, Akanni Hislop, and Terrance Laird clocked a 38.66 which ended up being the fastest qualifying time of the day in the event.

The women will take to action on Thursday for their first day of competition. Action will be carried on ESPN2 from 5:30-9 p.m. CT on Thursday.