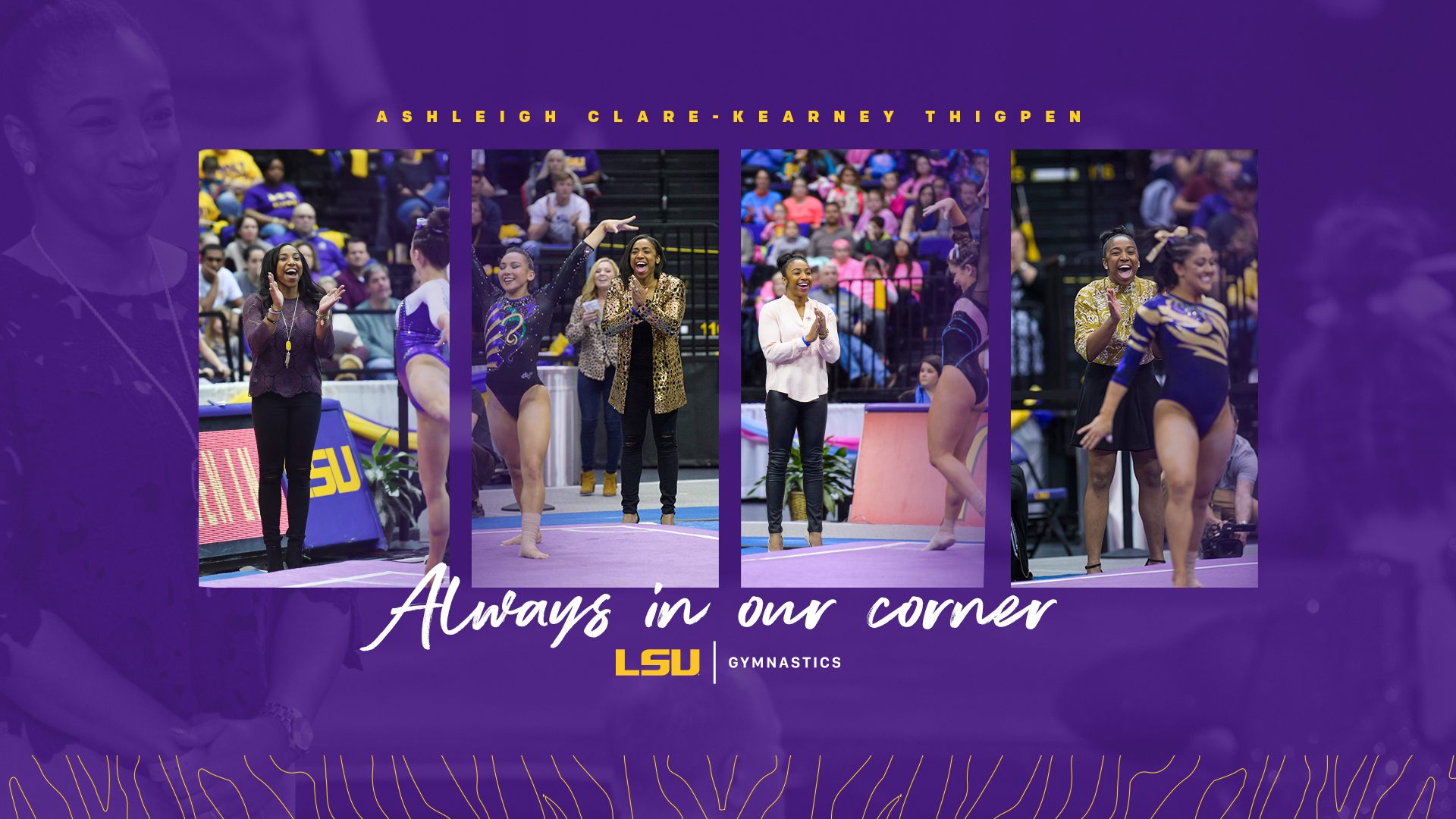 “I arrived in Baton Rouge at the age of 18 unsure about what my future in a foreign city, so far away from home, would look like, but D-D Breaux, Bob Moore, and Philip Ogletree immediately became my family and valued me beyond just gymnastics, Thipgen said. “They all played an integral part in shaping me into the woman I am today.”

Under NCAA rules, Thigpen can no longer serve on the gymnastics staff and work in the athletic department. She will continue to serve all LSU student-athletes and staff with her work in the evolution of the department’s culture in which diversity, equity and inclusion are at the forefront.

“I can’t thank DD, Bob, Phil, and Jay (Clark) enough for trusting me to work alongside them in this role,” Thigpen added. “It’s been an honor and privilege to serve this program as the volunteer assistant coach for the past 11 years. The relationships I have built with these young women, the coaching staff, and the LSU gymnastics community over the years will remain close to my heart and are something I will cherish forever. I am grateful that I am still able to work with the program in a different capacity. The opportunity to pursue my passions of working in the athletics department while simultaneously modifying systems and shaping hearts and minds was an opportunity I simply couldn’t refuse.”

“Ashleigh has been such a huge part of our success over the years,” LSU head coach Jay Clark said. “Her contributions in choreography are well chronicled, but her contributions as a friend and confidant to our team and staff can’t be measured. We are happy that she has found a place in the department to pursue her career and make a difference in areas that she has such great passion and expertise. We thank her and celebrate her as a former athlete, coach and friend.”

Thigpen worked for 11 years as the Tigers’ volunteer coach following an outstanding career in the Purple and Gold. Widely considered as the top choreographer in the nation, Thigpen’s floor performers consistently produced big floor scorers from start to finish each season. Eight lineups finished in the top five in the nation, including the No. 1 ranking in 2015.

An LSU gymnast won the SEC floor title in all but one season with Thigpen. Lloimincia Hall won a record four straight from 2012-15, Jessica Savona shared the floor title in 2013, Gnat went back-to-back in 2016 and 2017, McKenna Kelly won a share in 2017, and Sarah Finnegan scored a perfect 10 to capture the title and clinch LSU’s team win in 2019.

Under Thipgen, an LSU gymnast finished as the No. 1 performer in the nation five times, which is the most by any school in that span. Johnson, Gnat, Myia Hambrick and Hall in 2013 and 2015 ended the year in the top spot.

Prior to taking over as the program’s volunteer coach, Thigpen was an LSU gymnast for five seasons. She broke nearly every record and demonstrated excellence and leadership in competition and in the classroom. She was the 2009 NCAA vault and floor champion, LSU’s first two-time champion. As a junior in 2008, Thigpen became the second LSU gymnast to be crowned the SEC all-around Champion, and she also took home 2008 SEC Gymnast of the Year honors.

Thigpen still holds the school record for the most individual titles – winning 114 titles in her career, including 37 on vault, 27 on floor and 22 in the all-around. She was also recognized as a Scholastic All-American in both 2008 and 2009, and the Manchester, Connecticut, native was also a two-time SEC Academic Honor Roll member.

An active member in the local community, Thigpen was twice recognized as a member of the SEC Community Service Team, and she also received the 2008 Huel D. Perkins Leadership Award at LSU. Because of her prowess in the gym, in the classroom and in the community, Thigpen became the first LSU student-athlete to earn the distinction as an NCAA Woman of the Year Finalist in 2009

One of LSU’s most accomplished student-athletes, Thigpen earned her bachelor’s degree in 2008 and master’s degree in 2010. She went on to earn her Juris Doctor from the Southern University Law Center in 2013. She worked an attorney for the Louisiana House of Representatives for five years before moving to the athletic department.

In addition to her work with the state, Thigpen has also served as an adjunct professor at Southern University. Since 2013, Thigpen has worked in private practice in the areas of family law, contracts, personal injury and employment discrimination.

The daughter of Craig Kearney and Diane Clare-Kearney, Ashleigh married DaJuan Thigpen in 2016 in downtown Baton Rouge. They welcomed their first son, Beckham, in July 2020.