T&F Ready to Show Out at NCAAs

Eugene, Oregon  –  The LSU track and field team has made it to the NCAA Championships with 34 entries (19 women, 15 men). The four-day meet will take place at historic Hayward Field in Eugene, Oregon, Wednesday through Saturday. Wednesday and Friday will feature men’s action, and the women will compete on Thursday and Saturday. 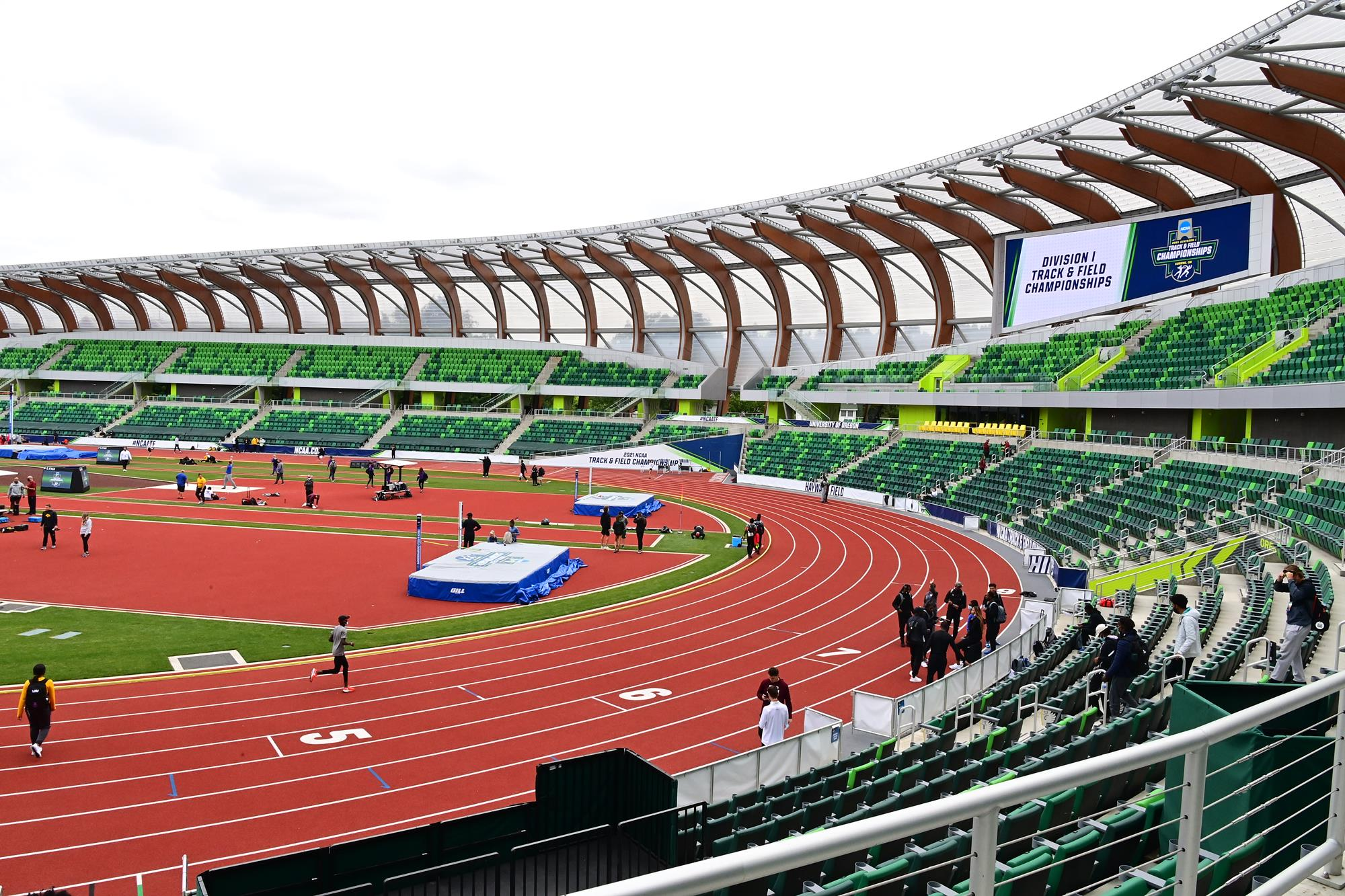 Eugene, Oregon  –  The LSU track and field team has made it to the NCAA Championships with 34 entries (19 women, 15 men). The four-day meet will take place at historic Hayward Field in Eugene, Oregon, Wednesday through Saturday. Wednesday and Friday will feature men’s action, and the women will compete on Thursday and Saturday.

The four-day meet will be covered in entirety by the ESPN networks with live TV slots on ESPN2 and ESPNU, while the whole meet will be streamed on WatchESPN. Day one of action on the men’s side will have live TV coverage on ESPN from 7-8 p.m. CT before coverage switches over to ESPN2 from 8-10:30 p.m. CT. Thursday’s coverage of the first day of women’s action will air live on ESPN2 from 5:30-9 p.m. CT. Likewise, the men’s action on Friday evening will go live on ESPN2 from 7-9:30 p.m. CT. The final day of coverage on Saturday will air live on ESPNU from 5-7:30 p.m. CT. Live stream links for all four days of coverage can be viewed below as well. Dedicated live streams to each field event will also be provided, and those can be viewed at ncaa.com.

Both the women and the men enter the NCAA Championships ranked as the No. 1 team in the nation. The women have been ranked No. 1 all season long, and the men have been No. 1 in nine of the 10 polls released this year by the U.S. Track & Field and Cross Country Coaches Association.

LSU at the NCAA Outdoor Championships

The LSU women have won 14 national titles to lead the NCAA; the next closest programs are Texas and Texas A&M with four apiece. The LSU men have captured four NCAA outdoor titles over the years, which ranks as the seventh most in NCAA history. The LSU women won 11 straight outdoor national titles from 1987-1997 to go along with titles in 2000, 2003, and 2008. The most recent in 2008 was under the direction of current head coach Dennis Shaver. The men’s national titles were won in 1933, 1989, 1990, and 2002.

JuVaughn Harrison is the only athlete on LSU’s roster that has won an outdoor national title. In 2019, he became the first man in NCAA history to sweep the long jump and high jump national titles. Harrison, who will be attempting to do the same thing this week in Eugene, owns four career national titles as he also accomplished the feat earlier this season at the NCAA Indoor Championships.

Although they haven’t won NCAA titles outdoors, Lisa Gunnarsson and Damion Thomas will try to replicate their wins from earlier this season at the NCAA Indoor Championships. Gunnarsson cleared a bar of 14′ 11.50″ (4.56 meters) in the pole vault to become LSU’s first woman pole vault national champion, and Thomas won the 60 meter hurdles with a readout of 7.51. Thomas’ event will the 110 meter hurdles outdoors instead of only 60 meter hurdles indoors.

Another note to note – of LSU’s 34 entries at the meet, 24 of those rank in the top 10 of the NCAA this season. In order to score points at a championship meet, an athlete or relay must finish in the top eight of an event. If you want to see where each LSU athlete ranks entering the NCAA meet, visit lsusports.net.

JuVaughn Harrison’s 2021 season has been something else. If you include the indoor season as well, the man is 12-2 in competitions this year. He’s solidified himself as one of the most prolific jumpers in NCAA history, and his marks in the long jump and high jump rival what just about anybody in world history has ever done.

He’s become the second best collegiate outdoor performer in the high jump after his immaculate performance, which included zero misses in seven tries, at the SEC Championships where he cleared a final bar of 7′ 8.75″ (2.36 meters). And then, in the long jump, his outdoor PR of 27′ 8.25″ (8.44 meters) ranks as the sixth best in collegiate history. Both of those marks this season by JuVaughn rank as the second best in the world.

Harrison is used to having to double up and do both events on the same day and sometimes even within a span of a few hours, but that will be different this week. He’ll compete in the long jump with teammate Rayvon Grey on Wednesday at 8:30 p.m. CT before going at it in the high jump on Friday at 6:30 p.m. CT.

What can you say about senior leader Tonea Marshall for LSU? She’s done it all. Led the way for this group. And now, it’s her stage. After having her chance stripped from her to win a national title at the 2020 NCAA indoor meet due to COVID-19 pandemic, the native of Arlington, Texas, is poised to show out in Eugene in the 100 meter hurdles.

Let’s just say this, she hasn’t been beat by a collegiate hurdler since the 2019 NCAA Outdoor Championships when she placed third at the national meet. This outdoor season competing for LSU, she’s a perfect 5-0 in 100 meter hurdles races and the times she has dropped have been impressive. The latest, a blistering 12.44 second race at the NCAA East Preliminaries, has moved her up to No. 4 all-time in collegiate history. She’s also dropped times of 12.49w, 12.52, and 12.53w this season. She won the SEC title with a windy time of 12.62.

Can he do it? Can Terrance Laird complete the sprint triple? Well, we don’t have that answer just yet, but we like our guy. Laird, a native of Coatesville, Pennsylvania, enters the meet with the top times nationally in the 100 meters (9.80w) and 200 meters (19.81), while he also anchors the 4×100 meter relay which will be in the running for a national title as well. The last man to complete the sprint triple at NCAAs? Walter Dix from Florida State in 2007 times of 9.93 (100 meters) and 20.32 (200 meters).

Noah Williams has been on one for LSU this whole season. Rewind to the NCAA indoor championships when he ran a 44.71 to become an NCAA champion and the fourth fastest man in world history over the distance of 400 meters indoors. He’s had a stellar outdoor season as well and will look to cap it off with an NCAA outdoor 400 meter title on Friday. Noah is entered in the 4x100m relay, 400 meters, and 4x400m relay for the week.

He enters the meet as the favorite with a season best time of 44.30 in the 400 meters. Not only does that lead the NCAA, but that ranks No. 2 on the global list for the 2021 outdoor season. He won the SEC title in a time of 44.37 in the 400 meters and he has yet to lose an individual race this outdoor season. He’s also a key component on LSU’s 4×100 meter relay, he runs the second leg, and on LSU’s 4×400 meter relay where he also runs the second leg.

LSU is the only team in nation to have four representatives on The Bowerman at this point in the season. Tonea Marshall is on the women’s list, and LSU’s three men representatives are JuVaughn Harrison, Noah Williams, and Terrance Laird. The Bowerman is awarded to the top female and male collegiate track and field athletes each December.

Harrison leads the crew with nine watch list appearances, Marshall is next with eight, and then Williams and Laird have four and three appearances, respectively.

The busiest LSU athlete of the week will undoubtedly be Symone Mason from the women’s sprints. She’s entered in four events – 100 meters, 200 meters, 4x100m relay, 4x400m relay – at the NCAA Championships. If she advances out of all four of those prelim rounds on Thursday, she’ll have another four races to compete in on Saturday for a grand total of eight races run in about 48 hours.

The sprinter from Miami, Florida, has peaked at the right time heading into the biggest meet of the year for LSU. She ran a PR of 22.49 seconds in the 200 meters at the NCAA East Preliminaries, and then her time of 11.03 in the 100 meters at East Prelims was .01 seconds off of her personal best of 11.02 in the 100 meters. She’s been holding down the third leg of the 4×100 meter relay all season and has recently been inserted as the leadoff runner on LSU’s 4×400 meter relay.

LSU has produced a mini docuseries over the past couple of weeks leading up to the NCAA Championships. You can view all the features at lsusports.net.