LAFAYETTE – Freshman Cameron Thomas led a trio of LSU Tigers on the first team as the 2020-21 Louisiana Sports Writers Association (LSWA) Men’s College Basketball Team was announced on Tuesday by the organization. 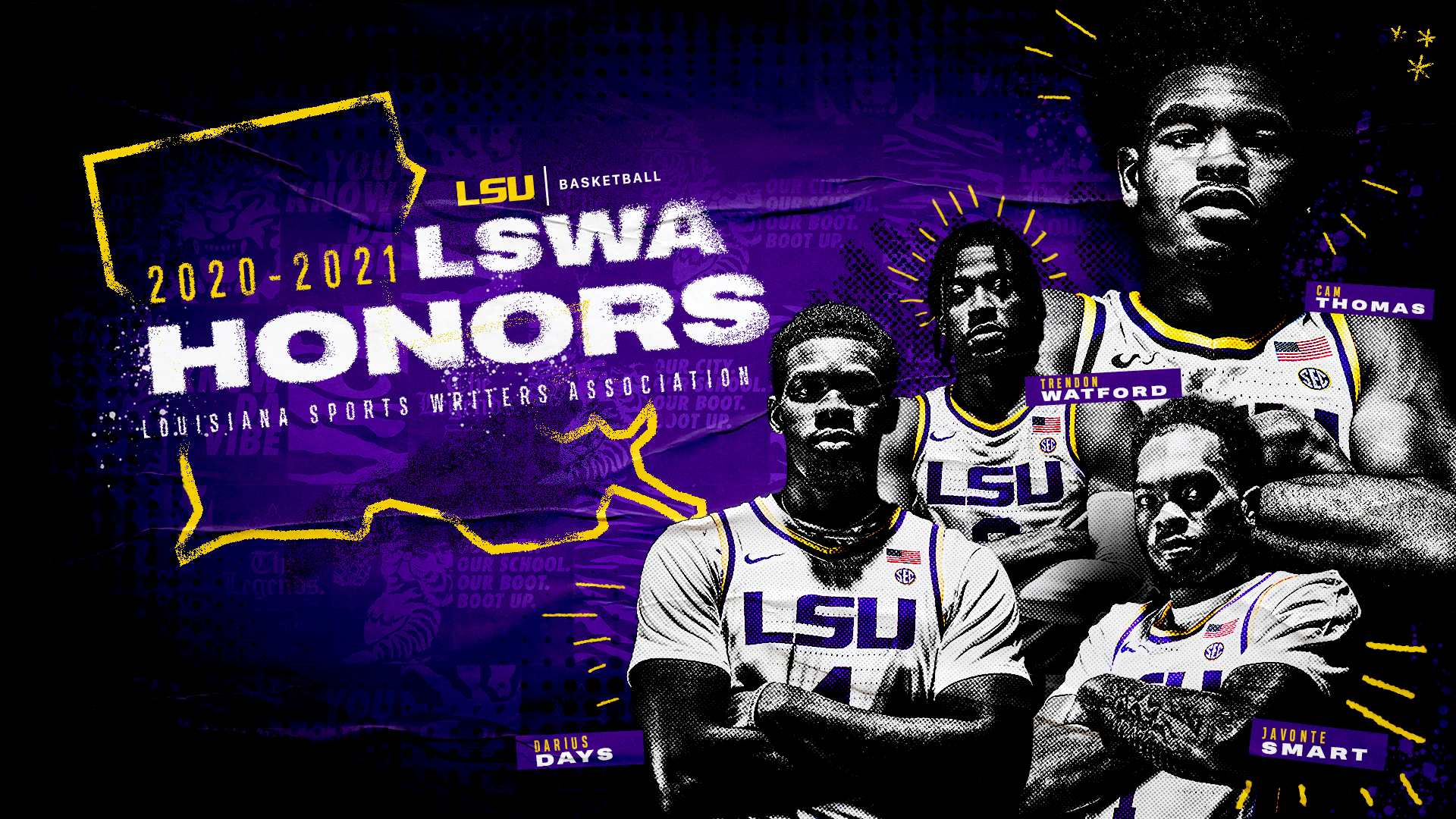 LAFAYETTE – Freshman Cameron Thomas led a trio of LSU Tigers on the first team as the 2020-21 Louisiana Sports Writers Association (LSWA) Men’s College Basketball Team was announced on Tuesday by the organization.

The 18-member team was selected after nominations by the state’s sports information directors and voted on by a panel of the state SIDs and media members.

Thomas claimed a pair of specialty honors as he became the first player since former LSU standout Ben Simmons in 2016 to claim both Player of the Year and Freshman of the Year honors. UL-Lafayette Ragin’ Cajuns junior Theo Akwuba was selected as the state’s Newcomer of the Year while Eric Konkol of Louisiana Tech was named the state’s Coach of the Year for the second consecutive season.

Thomas led both LSU and all NCAA Division I freshmen in scoring with a 22.6 average while being named first-team All-SEC. The USA Today Second Team All-American posted the fourth-highest scoring average by a first-year player in school history following Pete Maravich (1968), Mahmoud Abdul-Rauf (1989) and Bob Pettit (1952).

The Chesapeake, Va., native averaged 23.1 points per game in SEC play and had 21 games with 20 or more points – the most of any LSU player since Shaquille O’Neal in 1992. Thomas’ 16 games with 25-plus points were the most by any SEC freshman in the One-and-Done era (since 2006) and he converted on 88 percent of his free throws (176-for-200), including a school-record 42 consecutive makes.

Akwuba, a transfer from the University of Portland, had a breakout season for the Ragin’ Cajuns as he finished among the national leaders in blocked shots, rebounds per game and double-doubles. The 6-foot-11 post player averaged 11.3 points, 9.3 rebounds and 2.6 blocks in being named the Sun Belt Conference Defensive Player of the Year.

Konkol guided Louisiana Tech to a 24-8 overall record, the Conference USA West Division title and a berth in the National Invitation Tournament. Playing the second-toughest league schedule per KenPom.com, Konkol earned C-USA Coach of the Year honors and was the NABC District 11 Coach of the Year.

He became the first coach in program history to lead his team to five 20-win seasons while the Bulldogs were only one of five teams nationally to record 15 victories at home during the 2020-21 season. His team was rated No. 1 in C-USA and 39th in the country in adjusted defensive efficiency.

Joining Thomas on the first team were teammates Javonte Smart and Trendon Watford – the 2020 LSWA Freshman of the Year – plus the Cajuns’ Cedric Russell and LSU-Shreveport guard Kadavion Evans.

Smart, one of the underrated point guards in college basketball, posted his best season at LSU as a junior, averaging 15.9 points, 3.6 rebounds and 4.0 assists per game with 24 games in double figures. He had eight games of 20 points or more and 12 times with five or more assists. He was the seventh Tiger to record 1,200 career points, 300 assists and 100 steals. Smart, from Baton Rouge, led the SEC in minutes played at 35.6 minutes per game.

Watford, a sophomore from Birmingham, also improved in his second year with the Tigers, averaging 16.7 point, 7.4 rebounds and 3.0 assists per game. Watford averaged 15.9 points and 7.8 rebounds in the 17 SEC games. He posted nine games of 20 points or more this season with a career high of 30 in the SEC Tournament Championship game against Alabama.

Akwuba was joined on the second team by a pair of newcomers – Tulane’s Jaylen Forbes and Ty Gordon of Nicholls – along with Louisiana Tech freshman Kenneth Lofton, Jr., and Rayshawn Mart of Xavier.