Worsham: Tigers Back Where They're Supposed to Be

None of us are supposed to be here. 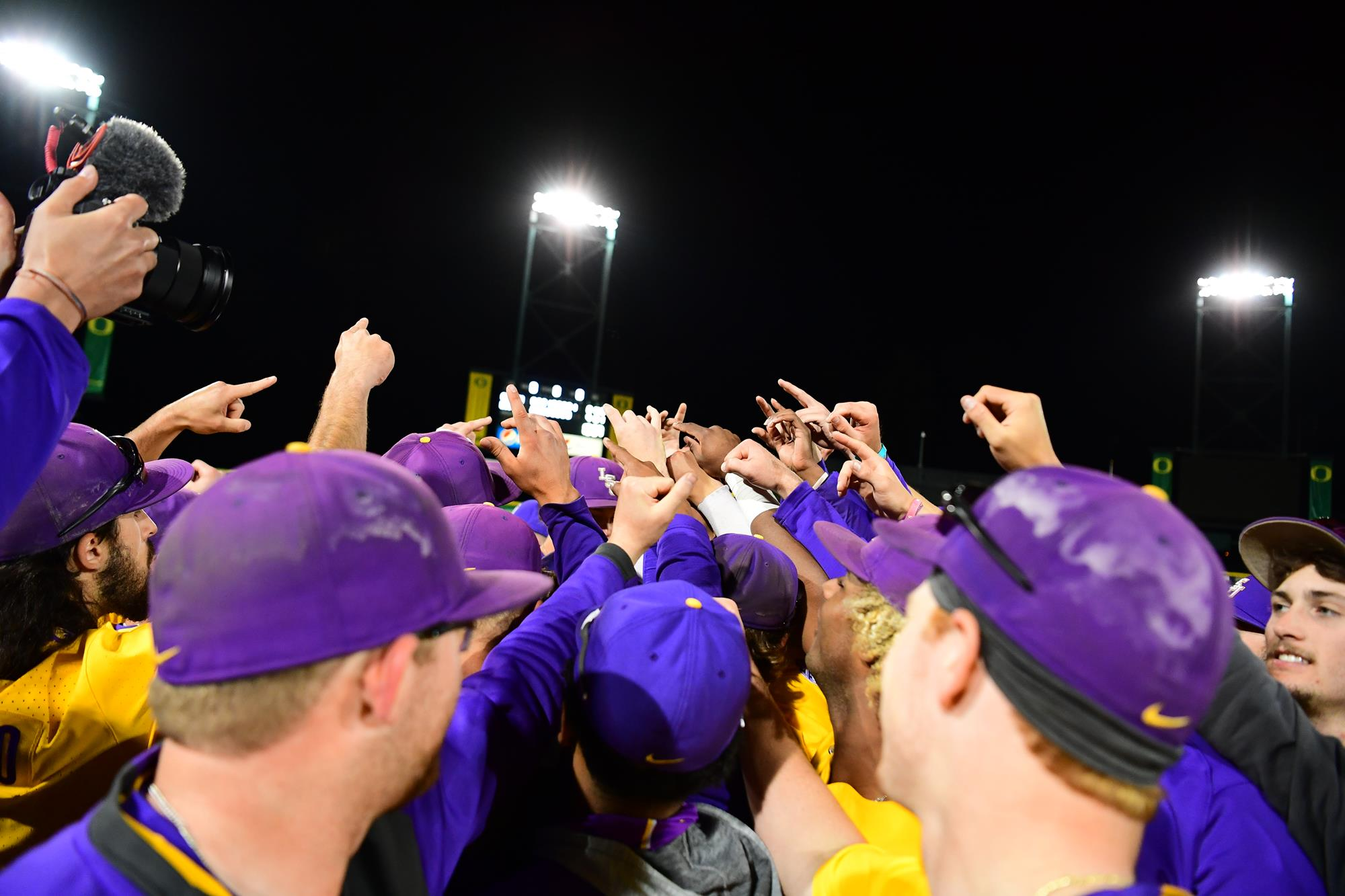 None of us are supposed to be here.

You, at home, watching past midnight, on a Tuesday in June. Me, on vacation, working past midnight, a cold beverage discarded several hours ago, when a story started writing itself. Paul Mainieri and his Tigers, playing past midnight (CDT), in Eugene, Oregon, the writers of that story, a three seed stuck since Friday in the loser’s bracket, a loss away from the end – of a season, and of a career.

Yet here we are. All of us. On to the Super Regionals. Because baseball doesn’t care about ‘supposed to.’

And neither do the Tigers.

If they did, they’d be home with the rest of us by now, wondering what their futures held and watching others fulfill lifelong dreams. Instead, they are two wins away from Omaha, writing those futures, fulfilling those dreams, one unpredictable pitch at a time.

Like baseball, this team doesn’t follow scripts – it writes its own. The team that started 1-8 in the SEC, that needed wins in its final three conference series to reach the NCAA Tournament, that nearly missed after losing its only game at the SEC Tournament, that team wasn’t supposed to be here.

“They’ve been counting us out all year,” said Gavin Dugas, the foremost, but not the only hero of the Eugene Regional. “We’ve had our backs against the wall all year. We’re ready for every situation that comes our way. The rough start we had prepared us for these situations.”

The latest heroic exploits from the junior utility man came Monday – in the field, on the base paths, and at the plate. His first inning diving catch in center field saved a run, his fourth inning single, stolen base, and swipe of home on a wild pitch stole one, and his two-run homer in the sixth gave the Tigers a 6-5 lead.

Bianco, who was hitting .171 as the Tigers’ backup second baseman in April, wasn’t supposed to be stretching out in center field or slamming go-ahead dingers in the regional championship, just like Dugas wasn’t supposed to emerge as the heir to the Gorilla Ball throne after entering the season with three career home runs. Yet two more Monday gave him 19 on the season, earned him Regional MVP honors, and paced the Tigers’ offense past Oregon’s far more rested bullpen.

Out of pitchers, LSU was forced to recycle used ones like Ma’Khail Hilliard and Landon Marceaux – who started and finished the game, respectively, after starting games one and two of the regional – or throw greener arms like Michael Fowler, Will Hellmers, and Garrett Edwards.

Teams who drop regional openers aren’t supposed to have enough pitching to dig their way out of the hole. But Edwards threw five scoreless innings Saturday in a win over Central Connecticut, AJ Labas threw 123 pitches hours Sunday morning to beat Gonzaga and preserve the Tigers’ already thin bullpen, and Javen Coleman threw six innings of one run ball to beat Oregon Sunday night to hand the Ducks their first loss of the weekend and set the stage for Monday – with help from a two-inning Devin Fontenot save.

But the off-script stuff started Sunday, in earnest, with Dugas leading the charge. The official scorer called it a triple with a throwing error, but we’ll all remember it as an inside-the-park home run that helped inspire the 4-1 win and force a Game 7.

Things got weirder Monday, with Dugas’ legs playing a critical role, again, after he led off the eighth inning with a walk. Cade Doughty doubled and Cade Beloso reached on a fielders choice to score a sliding Dugas.

With Jordan Thompson at the plate and runners on the corners with just one out, Oregon pitcher Kolby Somers threw multiple times to Beloso at first base – not because of concerns that Beloso would steal second, but to see if Thompson would square for a squeeze bunt. The final pick off attempt went awry – Sommers balked, Doughty jogged home, and Beloso trotted to second.

Thompson would single home Will Safford (running in Beloso’s stead) for a needed insurance run, and Marceaux would send the Ducks home for good in the ninth. The junior ace of LSU’s roster was on two days rest after throwing 101 pitches Friday, but he asked Mainieri for the ball on Monday night – Tuesday morning, by the clocks back in Baton Rouge.

“I couldn’t take the ball from him,” Mainieri said, adding that he asked Marceaux’s parents for permission before handing him the rock. “He’s been such a competitor all year. He wanted to pitch so badly tonight.”

“It means the world,” said Marceaux. “To win four straight just shows the resiliency of this team. I’m happy for our guys, I’m happy for Coach. I wouldn’t want to do it for anybody else.”

The arc bent in unexpected ways, but this chapter of the story got the ending it deserved: a smiling Mainieri, shaking his head in disbelief on the top step of the dugout and shoving off retirement for the foreseeable future.

“I know he told us yesterday that we won’t let him retire — and we won’t,” Dugas said. “We’re going to go as long as we possibly can, until we do what we need to do.”

Retirement can wait. There’s more story to write, and there’s absolutely no telling how it will unfold. The Tigers have more baseball to play in June, and Omaha is within reach.

Just how it’s supposed to be.