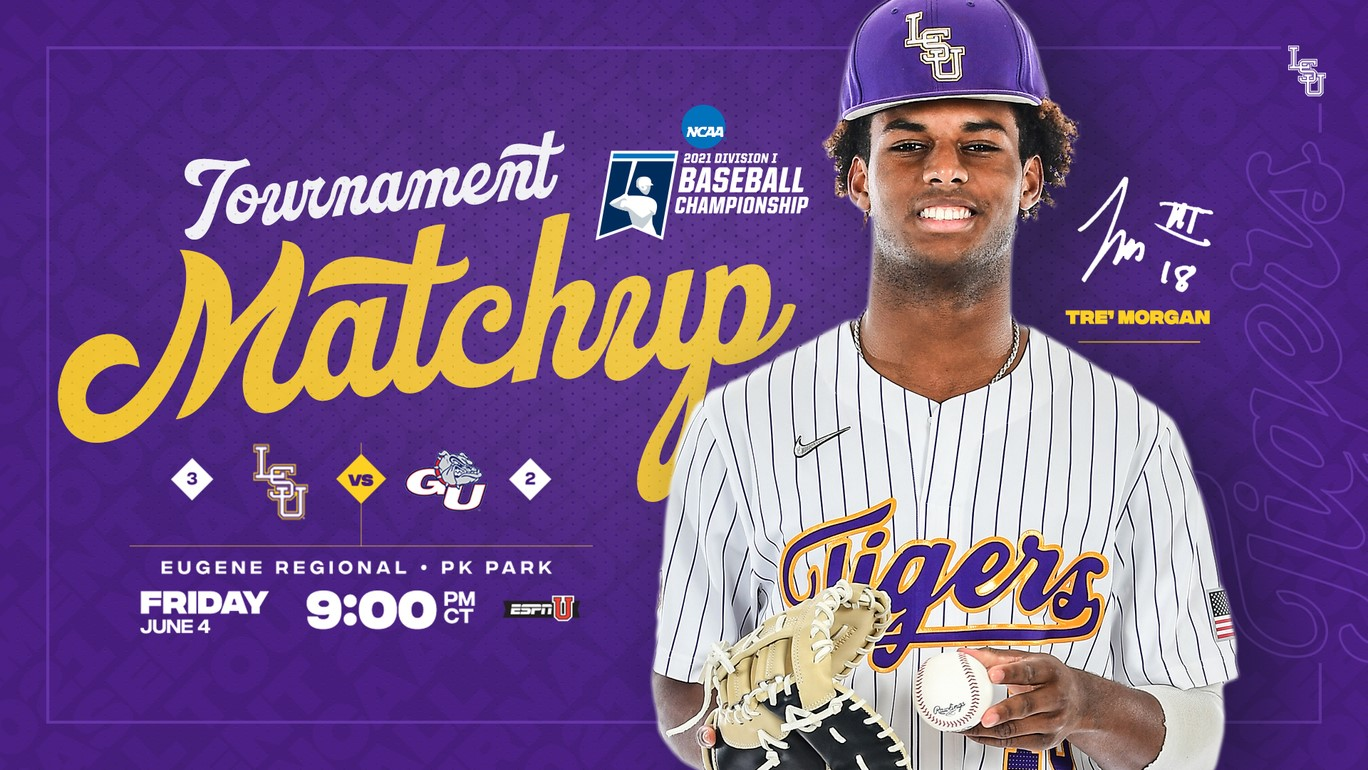 SERIES RECORD VS. GONZAGA
Friday’s game marks the first baseball meeting between LSU and Gonzaga. The Tigers are 6-2 all-time against teams from the West Coast Conference – LSU is 3-0 vs. St. Mary’s, 2-0 vs. Pepperdine, 1-1 vs. BYU and 0-1 vs. Loyola Marymount.

ABOUT THE TIGERS
LSU is No. 28 in the most recent official NCAA RPI rankings, and the Tigers are ranked No. 3 nationally in strength of schedule … LSU won five of its last seven SEC regular-season series, including the last three in a row … after a 1-8 start in SEC play, LSU was 12-9 over the final seven SEC weekends  … LSU has won nine of its last 14 games overall … the Tigers won four of their five SEC road series this season – at Kentucky, at Ole Miss, at Auburn and at Texas A&M.

Paul Mainieri
LSU coach Paul Mainieri announced on May 28 that he is retiring from coaching at the end of LSU’s 2021 season … he is No. 1 among active NCAA Division I Baseball coaches with 1,501 career wins in 39 seasons (six seasons at St. Thomas, six seasons at Air Force, 12 seasons at Notre Dame and 15 seasons at LSU) … Mainieri is No. 7 all-time among NCAA Division I Baseball coaches with the 1,501 career victories … LSU’s 13-6, 12-inning win at Texas A&M on May 21 marked the 1,500th victory of Mainieri’s collegiate career – he is only the fifth NCAA Division I Baseball coach to win 1,500 games and a national championship – the other four who have accomplished the feat are Augie Garrido (Cal State Fullerton/Texas), Gene Stephenson (Wichita State), Jim Morris (Miami) and Mark Marquess (Stanford).

Landon Marceaux – Second-Team All-SEC
Junior right-hander Landon Marceaux is No. 4 in the SEC in cumulative ERA (2.26), and he is No. 1 in the league in innings pitched (91.2) and No. 5 in the league in strikeouts (107) … he fired his first career complete game on May 25 vs. Georgia in the SEC Tournament, allowing four runs on nine hits in eight innings with three walks and nine strikeouts … Marceaux posted a streak earlier this season of 33.2 consecutive innings without allowing an earned run.

ABOUT THE BULLDOGS
•    Gonzaga is 33-17 overall, and the Bulldogs won the West Coast Conference regular-season title with a 20-7 mark … Gonzaga has a team batting average of .279 with 102 doubles, 33 home runs and 38 steals in 57 attempts … the Bulldogs pitching staff has an ERA of 4.43 and is limiting opponents to a .240 batting average.
•    The Bulldogs are led at the plate by infielder Brett Harris, who is hitting .353 with 17 doubles, one triple, six homers, 42 RBI and 51 runs scored … infielder Andrew Orzel is second on the club with 13 doubles and 34 RBI, and he also has three homers … catcher Tyler Rando is third on the team with 30 RBI, and he has 11 doubles and three homers.
•    Gonzaga head coach Mark Machtolf played on the Stanford team that defeated LSU in an elimination game of the 1987 College World Series … Machtolf is in his 18th season as Gonzaga’s coach.