Jacksonville, Fla.  –  The No. 1 ranked LSU women’s track and field program added 15 more entries to the 2021 NCAA Championships to conclude the NCAA East Preliminaries on Saturday at Hodges Stadium. The LSU women will have a total of 19 entries at the NCAA meet in two weeks in Eugene, Oregon. 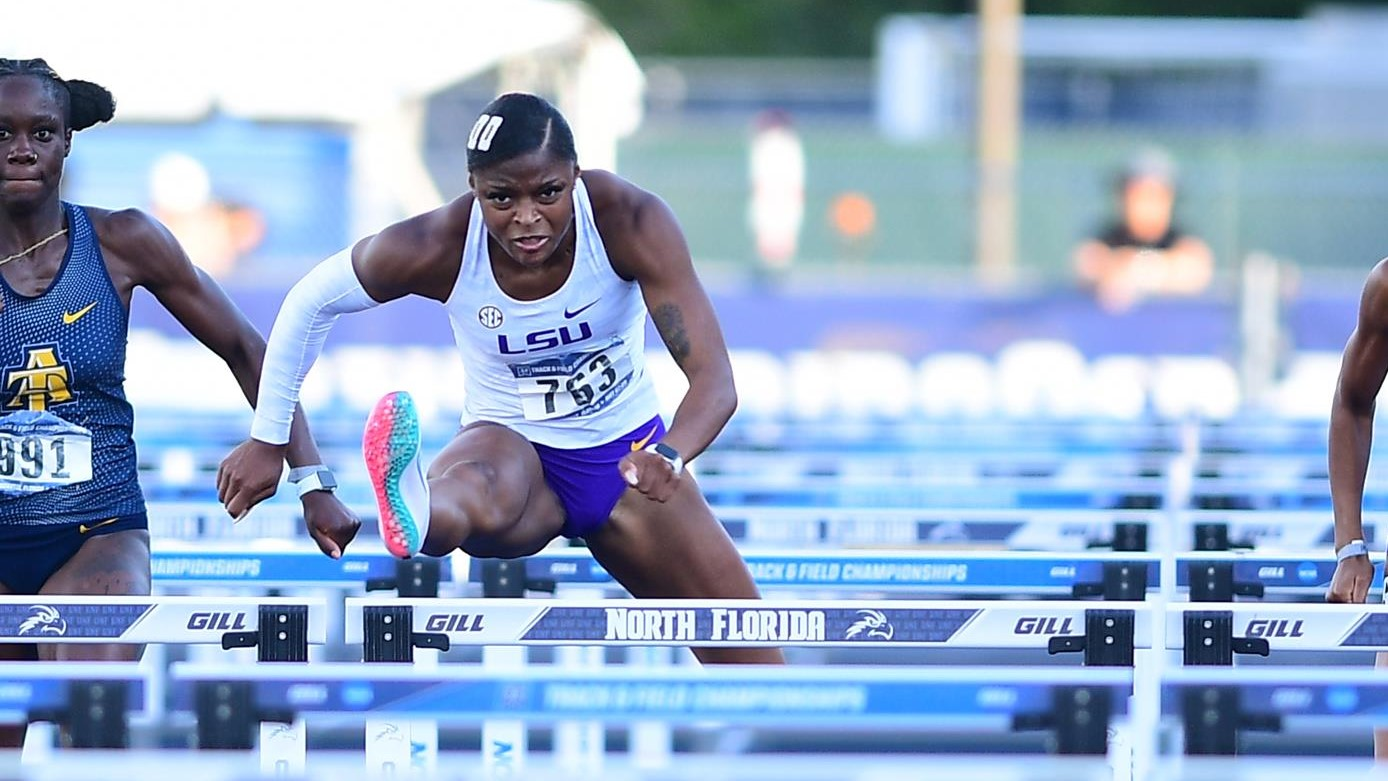 Jacksonville, Fla.  –  The No. 1 ranked LSU women’s track and field program added 15 more entries to the 2021 NCAA Championships to conclude the NCAA East Preliminaries on Saturday at Hodges Stadium. The LSU women will have a total of 19 entries at the NCAA meet in two weeks in Eugene, Oregon.

LSU moved five hurdlers on to Eugene. In the 100 meter hurdles, it’ll be the duo of Tonea Marshall and Alia Armstrong representing LSU. Marshall had the performance of the day for the Tigers with her PR of 12.44 seconds in the event to break her own LSU school record that she set two weeks ago at the SEC Championships. It makes her the fourth fastest 100 meter hurdler in collegiate history, is a Hodges Stadium facility record, and moves her up to No. 2 in the world this season. Armstrong ran a time of 12.97 seconds to take the 11th position and earn her first bid to the NCAA Outdoor Championships.

In the 400 meter hurdles, the trio of Milan Young (56.73), Jurnee Woodward (56.77), and Brittley Humphrey (57.33) all earned big Qs to the NCAA meet by finishing in the top three of their respective quarterfinal heats; LSU will be counting on its hurdlers for big points at the NCAA meet in two weeks.

Distance runner Katy-Ann McDonald registered her second consecutive PR in the 800 meters on Saturday night when she circled the track twice in a time of 2:01.67 to earn a big Q as well by finishing in the top three of her heat. The 2:01.67 moves her into the No. 5 spot in the LSU record book.

Symone Mason qualified for two individual events at the NCAA Championships. She ran a time of 11.03 in the 100 meters to finish third overall in the final 24 runners, and then in the 200 meters she clocked a personal best of 22.49 to advance on as well. The time of 22.49 in the 200 meters for Mason ranks as the eighth fastest time in LSU history.

Favour Ofili ran out to a wondrous career best of 22.30 in the 200 meters one heat after Mason to earn her spot in Eugene; the time of 22.30 ties for fourth in the LSU record book alongside Zundra Feagin and it makes her the fourth fastest U20 athlete in world history over the distance. The final two sprinters from LSU to advance to the NCAA final site were Amber Anning and Thelma Davies. Anning collected a career best time of 51.78 to finish third in her quarterfinal heat and earn an autobid to Eugene; Davies did the same thing and finished third in her quarterfinal of the 200 meters with a readout of 22.98.

PRs in the last 90 minutes at NCAA East Prelims!

In the high jump, Abigail O’Donoghue cleared 5′ 11.50″ (1.82 meters) on her third and final attempt at the height to advance. Nyagoa Bayak was unable to clear the bar of 5′ 11.50″, but she cleared the previous bar of 5′ 9.75″ (1.77 meters) on her first try and advanced due to lesser misses than the rest of the competitors who were competing for the final spots.