LSU baseball coach Paul Mainieri, who led the Tigers to the 2009 national championship and is No. 1 among active NCAA Division I coaches in career victories, announced Friday that he will retire at the end of the 2021 season 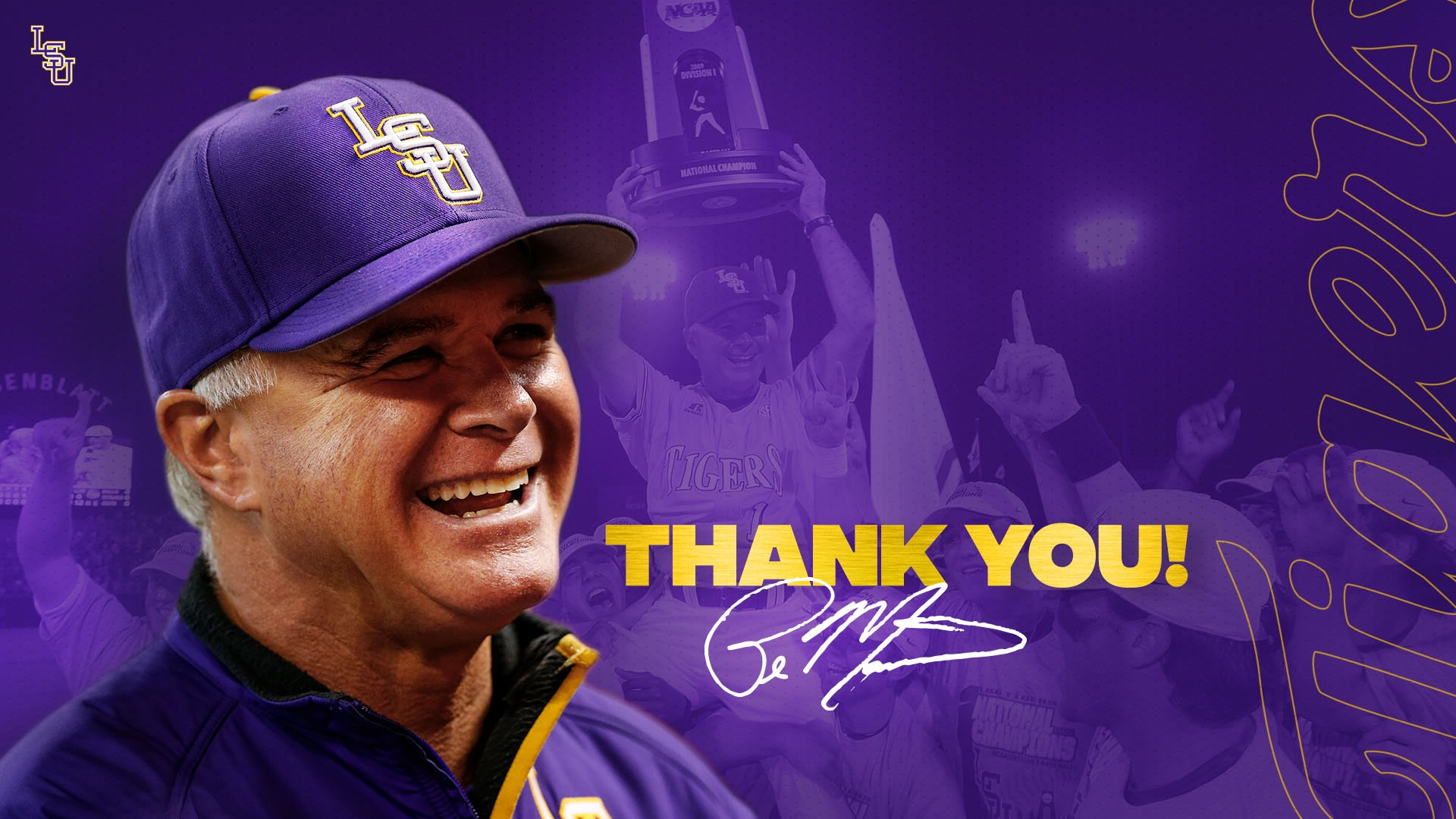 BATON ROUGE, La. – LSU baseball coach Paul Mainieri, who led the Tigers to the 2009 national championship and is No. 1 among active NCAA Division I coaches in career victories, announced Friday that he will retire at the end of the 2021 season.

Mainieri, whose collegiate career spans 39 seasons – including the past 15 years at LSU – will coach the Tigers in the 2021 NCAA Tournament should they receive a berth in the 64-team field.

“I have been the luckiest guy in the world to have lived out a childhood dream of becoming a college baseball coach,” Mainieri said. “I’ve worked at four wonderful institutions, and it’s been the honor of my life to have served as the head coach at LSU for 15 years. To have carried the torch of a program built by Skip Bertman, the greatest college baseball coach of all time, has been a tremendous privilege. It has always been my unwavering goal to sustain the excellence that was created here.

“I’ve been blessed throughout my career to coach unbelievable young men of great character and skill, and to have worked with talented and dedicated assistant coaches, support staff and administrators. It’s very difficult to leave a profession that I truly love, but I’m so grateful for the amazing opportunities that have been presented to me through the years.”

“Paul Mainieri has made an immeasurable impact not only at LSU, but across college baseball,” said director of athletics Scott Woodward. “Every day he has taken the field, he has honored the game he loves with his class, his character, and his commitment to excellence. We are forever grateful for the championships he has won, the student athletes he has inspired, and memories he has gifted our fans over 15 seasons.”

He is one of only five coaches in NCAA Division I Baseball history to win 1,500 games and a national championship. The others are Augie Garrido (Cal State Fullerton/Texas), Gene Stephenson (Wichita State), Jim Morris (Miami, Fla.) and Mark Marquess (Stanford).

Mainieri’s LSU players have earned First-Team All-America recognition on 13 occasions, and 20 of his former Tigers have played Major League Baseball, including MLB All-Stars DJ LeMahieu, Alex Bregman and Aaron Nola. LSU players have been chosen in the MLB Draft on 88 occasions during Mainieri’s tenure, including a first-round selection in seven of the past 12 seasons.

He served as the head coach of the United States Collegiate National Team for its 2018 summer tour, and he led Team USA to a 12-3 record that included series victories over Chinese Taipei, Japan and Cuba.

His sincere commitment to everyday excellence was recognized in a substantial way on January 3, 2014, in Dallas when he was inducted into the American Baseball Coaches Association Hall of Fame. Mainieri, a four-time National Coach of the Year, joined in the Hall of Fame his father, Demie Mainieri, who coached Miami-Dade North Community College to 1,012 wins and a national title in his 30-year career. Demie and Paul Mainieri are the only father-son combination in the ABCA Hall of Fame.

Mainieri’s emphasis upon academic achievement has been illustrated by the Tigers’ performance in the classroom, as 103 LSU baseball players have earned their degrees during his tenure. Twenty-five of the graduates were players who signed professional contracts before completing their college eligibility and returned to LSU to finish their degree requirements. In addition, LSU players have received SEC Academic Honor Roll recognition on 141 occasions over the past 14 seasons.

When Mainieri was hired as LSU’s coach in June 2006, he expressed a clear vision for the future of the Fighting Tiger program. Just three years later, LSU occupied the pinnacle position in college baseball as the 2009 NCAA National Champions. Mainieri directed the ’09 Tigers to the College World Series title, posting a 56-17 overall record, including a 10-1 mark in NCAA Tournament competition.

Mainieri had served for 12 seasons as the head coach at Notre Dame when he accepted then LSU director of athletics Skip Bertman’s offer to take over the LSU program. Mainieri directed Notre Dame to 14 different team titles, including a 2002 NCAA Super Regional championship and a berth in the College World Series. Sixty of Mainieri’s Fighting Irish players signed professional contracts, and eight of them reached the Major Leagues.

He was the first civilian baseball coach at the United States Air Force Academy from 1989-94, and four of his players went on to attain the rank of general in the armed forces. One of his former players, retired Major Mike Kazlausky, is now the head coach at Air Force.

His collegiate coaching career began in 1983 at St. Thomas University in Miami, Fla. In March 2013, St. Thomas named its new baseball facility in honor of Mainieri, who also worked as the school’s director of athletics for three years.

Mainieri first joined the coaching profession at his alma mater, Columbus High School in Miami, where he worked as assistant baseball coach – for head coach Jim Hendry, his best friend and future GM of the Chicago Cubs – and assistant football coach. He was inducted into the Columbus High Sports Hall of Fame in 2009.

Along with his father, he counted among his mentors Hall of Fame manager and two-time World Series champion Tommy Lasorda of the Los Angeles Dodgers; and legendary former University of New Orleans baseball coach and athletics director Ron Maestri, who led UNO to the College World Series in 1984.

Mainieri, who was born in Morgantown, W. Va., and raised in Miami, will achieve his goal of finishing his collegiate baseball career in the same place it began 45 years ago. He earned a letter in 1976 as a freshman outfielder at LSU, where he also met his future wife, Karen, then a Fighting Tiger cheerleader.

Mainieri played one season for his father at Miami-Dade North Community College and two seasons at UNO, where the second baseman helped the Privateers win two Sun Belt Conference titles and advance to the 1979 NCAA Tournament.

After completing his undergraduate degree requirements at Florida International in 1980, Mainieri earned a master’s in sports administration from St. Thomas in 1982.

“I will forever be a Tiger.”

A letter from Paul Mainieri: pic.twitter.com/Fi0N78Poct

At St. Thomas
•    1984 Sunshine State Conference Coach of the Year