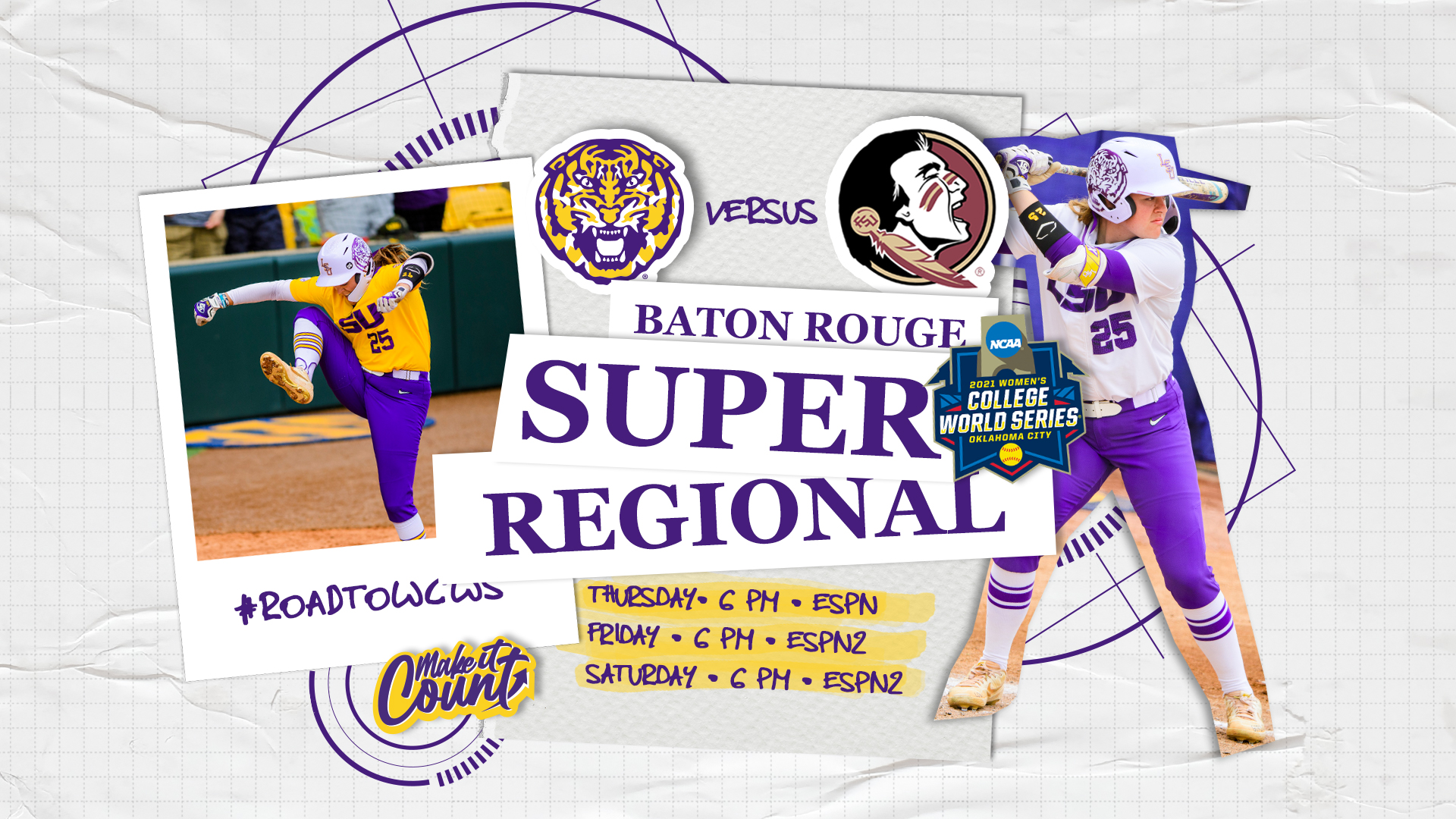 Game one between the Tigers and Seminoles will be televised on ESPN. ESPN2 will carry game two on Friday and the if necessary game on Saturday. Kevin Brown, Amanda Scarborough and Jalyn Johnson will have the call live from Baton Rouge. All games of the Baton Rouge Super Regional will start at 6 p.m. Patrick Wright will also have the call on the LSU Sports Radio Network.

“What an honor to be one of the last 16 teams playing for a spot in Oklahoma City and the Women’s College World Series,” head coach Beth Torina said. “To be able to play in Tiger Park is a really big deal for our team because the majority have never experienced this before. It is going to be a battle this weekend, and we can’t wait to have the home field advantage with Tiger Park at 100 percent capacity. “

Two wins over FSU would advance the Tigers to the seventh WCWS in school history and the fifth under Torina. In 10 seasons as the head coach of the Fighting Tigers, Torina has more than 400 wins and seven NCAA Regional Championships.

This weekend will mark the third time in four years these teams will meet with a spot in the WCWS at stake. LSU took the first series in 2017 and FSU punched its ticket to OKC in 2018. Both super regionals were hosted by FSU in Tallahassee.

“There is obviously a lot of history between these two teams over the years,” Torina added. “We have a lot of respect for Florida State and Lonnie (Alameda). They have had great success and we know the type of team they are. The old super regionals won’t matter once we take the field on Thursday night.”

The 2021 season marks just the second time LSU will host a Super Regional at Tiger Park. As the seven seed, the second-highest seed in school history, LSU earned homefield advantage throughout the first two rounds.

In the five times the Tigers have punched their ticket to OKC under Torina, four have come on the road. In 2015, No 5 LSU swept Arizona in two games to make it to OKC, which started a stretch of three-straight trips to the WCWS.

LSU made it to this weekend after going 3-1 last weekend in the Baton Rouge Regional against McNeese State and UL-Lafayette. LSU run ruled the Cowgirls in the opening game, 10-2 and proceeded to win the pivotal game three,10-3. On Championship Sunday, LSU fell in the opening game to ULL but took the winner-take-all
game seven, 8-5.

Ali Kilponen and Shelbi Sunseri led the LSU pitching staff with 15 and 11 wins respectively on the year. Kilponen owns a 1.92 ERA and Sunseri’s ERA sits at 2.11. They have combined to strike out 200 batters in 2201.

For all of the latest news and information on Tiger softball, visit www.lsusports.net/softball. Fans can also follow the program on its social media outlets at www.Facebook.com/lsusoftball along with @lsusoftball and @BethTorina on Twitter and @lsusoftball on Instagram.?