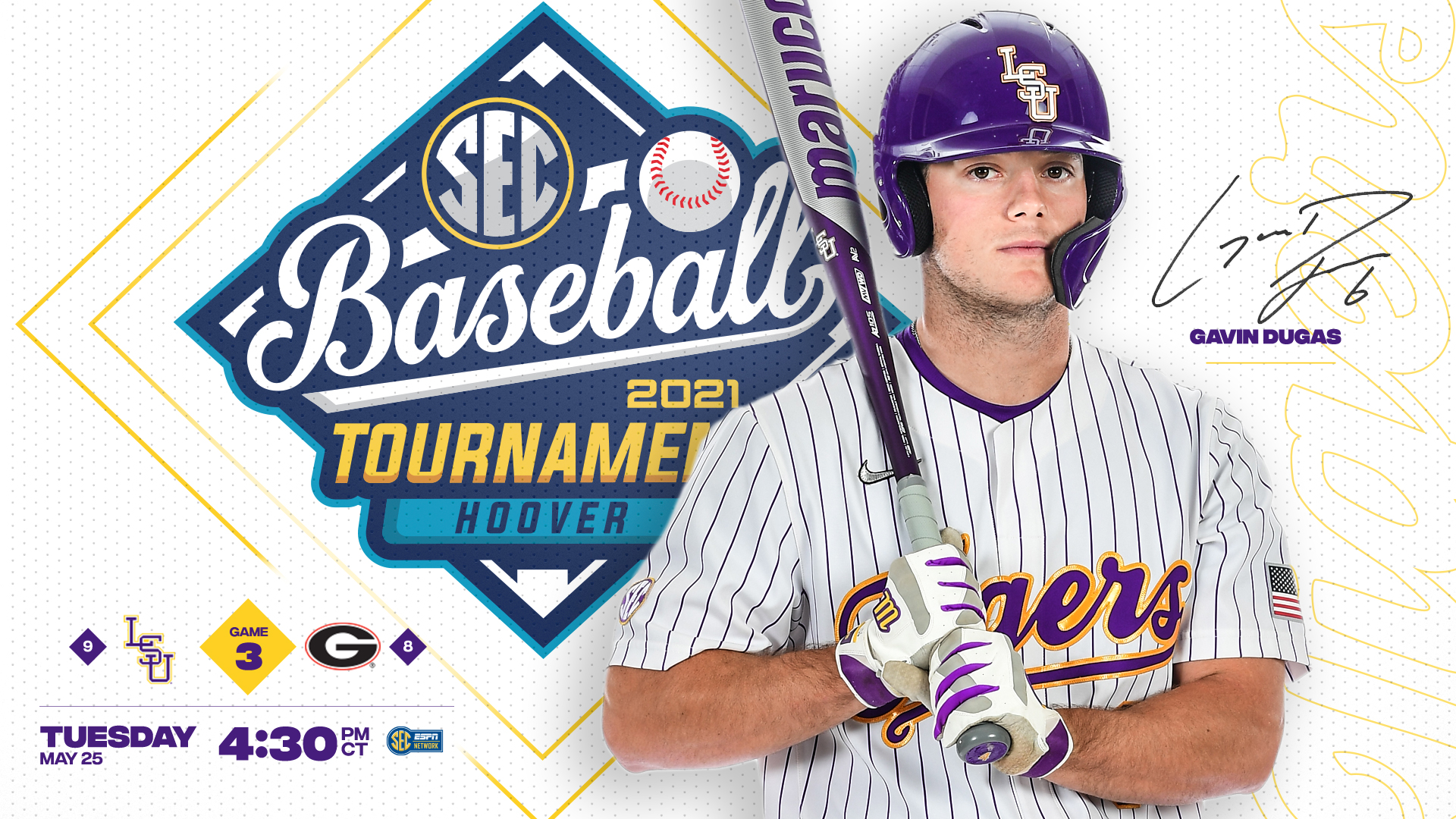 SERIES RECORD VS. GEORGIA
LSU leads the all-time series with Georgia, 68-24-3, and Tuesday’s game marks the first meeting between the schools since March 22-24, 2019, when UGA won two of three games over the Tigers in Athens. LSU has won 10 of its last 13 SEC regular-season series versus UGA, and the Tigers have an 17-9-2 advantage over the Bulldogs in games played over the past 12 seasons. Tuesday’s game marks the first LSU-Georgia matchup in the SEC Tournament since 2009, when the Tigers won two tournament games over the Bulldogs. LSU is 9-2 all-time versus Georgia in SEC Tournament games.

ABOUT THE TIGERS
LSU is No. 21 in the most recent official NCAA RPI rankings, and the Tigers are ranked No. 2 nationally in strength of schedule … LSU has won five of its last seven SEC series, including the last three in a row … the Tigers have won nine of their last 13 games overall … LSU won four of its five SEC road series this season – at Kentucky, at Ole Miss, at Auburn and at Texas A&M.

Cade Doughty
Sophomore third baseman Cade Doughty led LSU to a series win at Texas A&M over the weekend, batting .333 (5-for-15) with one double, one homer, six RBI and three runs scored … he also recorded 13 assists on defense and posted a 1.000 fielding percentage in 15 chances … in the Tigers’ Game 2 win over the Aggies, Doughty doubled, homered and collected five RBI … his two-out, three-run homer in the fifth inning erased a 6-3 deficit and the game remained tied at 6-6 until the top of the 13th, when Doughty’s two-run double highlighted a six-run outburst in the 12-6 LSU victory … he added an RBI single in the fourth inning of LSU’s 8-2 win over Texas A&M that clinched the Tigers’ third straight SEC series victory … Doughty is No. 5 in the SEC in RBI this season with 53.

Gavin Dugas
Leftfielder Gavin Dugas homered twice, drove in three runs and scored three times in last weekend’s series win at Texas A&M … Dugas posted a .571 on-base percentage in the series, as he walked three times and was hit by a pitch on three occasions … he is No. 2 in the SEC in RBI this season with 60, No. 4 in home runs (16), and No. 8 in slugging percentage (.617).

Ma’Khail Hilliard
Senior right-hander Ma’Khail Hilliard clinched LSU’s series win over Texas A&M on Saturday by limiting the Aggies to two runs on six hits in seven innings with no walks and two strikeouts … he blanked Texas A&M through the first three innings and allowed only single runs in the fourth and sixth innings … since moving into the weekend starting rotation four weeks ago – when he defeated top-ranked Arkansas – Hilliard is 3-0 with a 2.59 ERA in 24.1 innings with four walks and 18 strikeouts … he is limiting opponents to a .186 batting average in that four-game span.

Landon Marceaux
Junior right-hander Landon Marceaux is No. 3 in the SEC in cumulative ERA (2.04), and he is No. 2 in the league in innings pitched and No. 8 in strikeouts (98) … Marceaux posted a streak earlier this season of 33.2 consecutive innings without allowing an earned run.