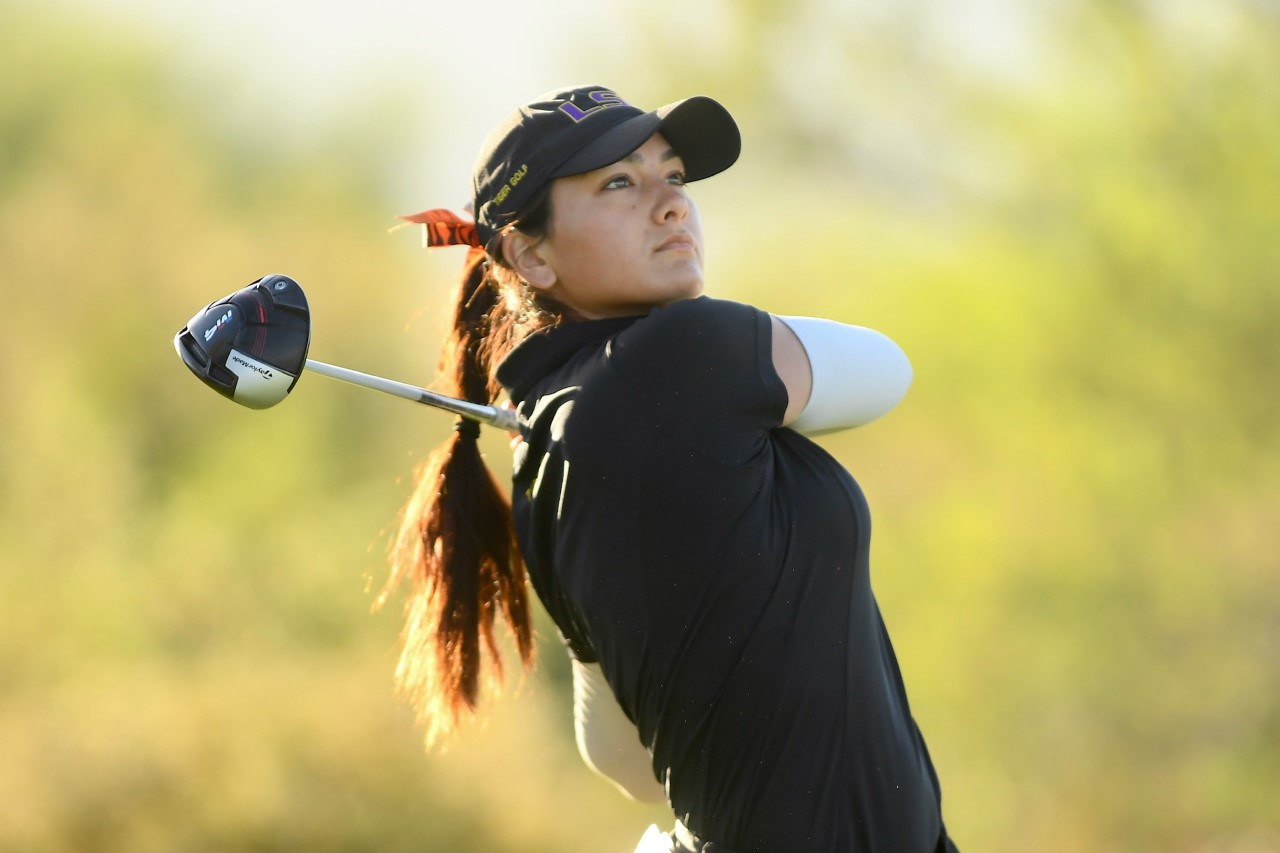 The Tigers after shooting an 8-over 296 on Friday, improved to a 4-over 292, helped by the play on the last two holes on a calm, sunsplashed morning. LSU’s 36 hole total of 12-over 588 will keep the Tigers in eighth place entering Sunday’s third round, the same place they started the day in.

The 292 total tied for the fourth lowest single round for LSU in an NCAA women’s national championship and the 588 ties the second lowest 36 hole total in NCAA championship play.

LSU got birdies on the short par 4 17th from Ingrid Lindblad, Latanna Stone and Carla Tejedo Mulet and then Lindblad and Mulet made it back-to-back on the closing 495-yard hole.

That put Mulet, the freshman from Castellon de Plana, Spain to 1-under 71 for the day and a two day total of even par 144 (73-71). It also put her in a tie for tenth place in this all-star field of college golfers.

Mulet had two birdies and two bogeys on the front nine and bogeyed 16 before the two birdies.

The Tigers day started at 4:49 a.m. Scottsdale time when the team boarded their vans at the hotel to make the 15-minute drive to Grayhawk to get some breakfast and prepare for a 6:30 a.m. first tee time. LSU and the other top 11 seeds had the late early side of the draw.

Overall, the finish left the team feeling good about their day.

“The five birdies on the last two holes was huge for us,” said LSU Head Coach Garrett Runion. “It was good momentum for Ingrid and Carla and not to mention where that will put us on the leaderboard at the end of the day. It was one of those days we knew we needed to take advantage of it and we really didn’t get much going with the short turnaround after finishing late (Friday night).

“But they stayed patient, like Latanna Stone who birdied two of her last five to finish one-under and Carla birdieing her last two. I was proud of how patient they stayed. Our score was better (Saturday) than (Friday) and that’s one of our goals to improve each round,” he said.

Kendall Griffin had a solid 2-over 74 for the Tigers and Lindblad’s late birdies helped the nationally-ranked sophomore post a 4-76.

Stanford and Duke took full advantage of the benign morning conditions as Stanford shot 10-under and Duke 7-under. Stanford is the 36 hole leader at 7-under 569; four clear of Duke.

Stanford’s Rachel Heck followed up a Friday 69 with a 5-under 67 to post 8-under 136. She is clear by five strokes of second place.

LSU is 8-under for the event on the par 5s, second only to Duke and the Tigers have made 23 birdies in two rounds — 12 Friday and 11 Saturday.

LSU will get to sleep in a touch Sunday with the top 12 teams off in the morning wave. LSU will tee off on the first tee at 7:36 local time, 9:36 CDT. LSU will play with seventh place Ole Miss and ninth place Oregon.

The top 15 teams will advance to Monday’s fourth and final round that will determine the individual champion and the eight teams that advance to match play.

Late in the second round, LSU was 12 shots clear of 15th place.

Live scoring for Sunday’s round can be found at Golfstat.com and updates will be available on Twitter @LSUWomensGolf.