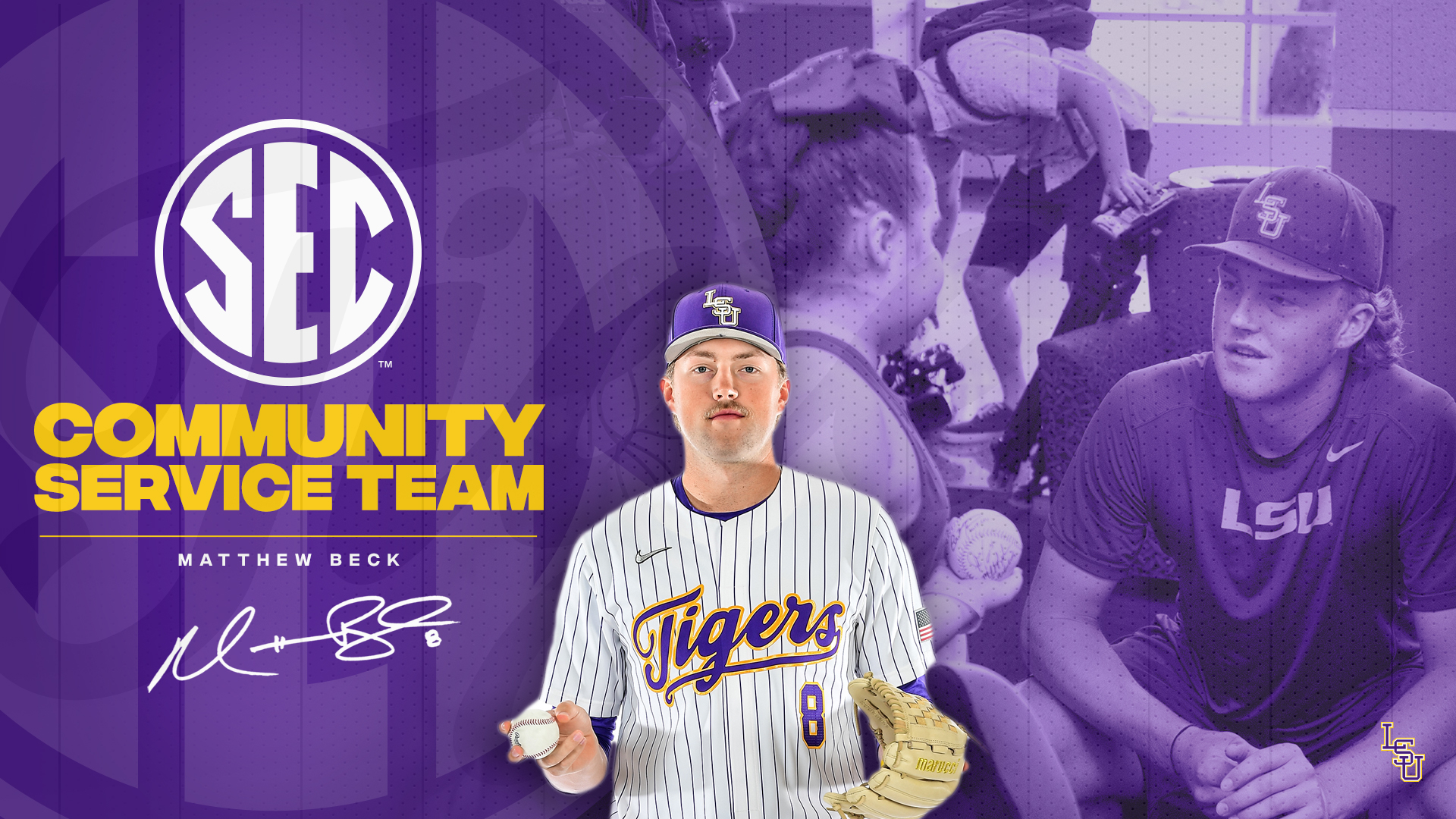 BIRMINGHAM, Ala. —– In a continuing effort to recognize the accomplishments of student-athletes beyond the field of competition, the Southeastern Conference has highlighted a Community Service Team for baseball for the 2021 season. The conference names a Community Service Team for each of its 21 league-sponsored sports, looking to highlight an athlete from each school who gives back to his community through superior service efforts.

The 2021 SEC Baseball Community Service Team is as follows:

LSU – Matthew Beck, Gr., RHP, Alexandria, La.
Matthew Beck has been named to the SEC Community Service Team for the second straight year. He is two-time member of the SEC Academic Honor Roll, and he was presented in February 2020 with the Shriners Hospitals for Children Service Award for his philanthropic activity. Beck has earned a bachelor’s degree in finance and a master’s degree in business administration from LSU. He has been active in flood relief efforts in the Baton Rouge and Lake Charles metro areas, assisting residents in the clean-up of their homes and neighborhoods. His other community service activities include:  worked as a volunteer for Boys Hope Girls Hope, an organization in Baton Rouge that helps at-risk children to meet their full potential by providing value-centered, family-like homes, opportunities and education; participates in LSU’s annual Halloween Boo-zar, where student-athletes distribute candy to children in the Baton Rouge community; engaged in Thanksgiving with the Tigers, a program in which LSU student-athletes deliver food to families in need.

Alabama – Peyton Wilson, So., UTL, Hoover, Ala.
Wilson recorded 15 total hours of community service during his first season at UA in 2019-20, the most by any member of the Crimson Tide baseball team. He took part in 11 total volunteer opportunities, committing his most significant chunk of time to the Alberta Head Start program, working with and mentoring children from low-income families across Tuscaloosa. He added time at The Miracle League of Tuscaloosa, the Salvation Army and numerous local elementary schools. Wilson also contributed his volunteer efforts to on-campus events including the University’s ‘Thank-a-Thon’ and Halloween Extravaganza. The sophomore was unable to take part in the University’s limited volunteer opportunities this past year due to the pandemic and current COVID protocols around the city.

Arkansas – Jacob Nesbit, Jr., INF, Coppell, Texas
Jacob Nesbit has been actively involved in the Fayetteville community during his time as a Razorback. Despite the pandemic limiting opportunities to participate in service projects, he was involved with Team Impact and supported Arkansas’ inaugural Childhood Cancer Awareness game against Arkansas State. He, along with teammates Cullen Smith and Braydon Webb, joined Joshua Ortiz, an eight-year-old battling leukemia, on the field for the ceremonial first pitch.

Auburn – Ryan Bliss, Jr., INF, LaGrange, Ga.
Bliss’ efforts in the community have been highlighted by participating in World Read Aloud Day at local elementary schools the last three years, including virtually during COVID-19. He has volunteered with Samaritan’s Purse to help clean up the damage done by the tornado that devastated East Alabama in March 2019. Additionally, he visited and uplifted patients at Children’s of Alabama and participated in a baseball day camp for the Miracle League of East Alabama. In collaboration with the Hudson Family Foundation, Bliss recorded a congratulatory and encouraging video for students from Auburn City Schools, Opelika City Schools and Lee County School being inducted in the Legends Club. He has also helped the Jason Dufner Foundation stuff backpacks to be distributed to the less fortunate around the holidays.

Florida – Tommy Mace, Jr., RHP, Tampa, Fla.
Mace’s community service activities include: served as a mentor and volunteer at Littlewood Elementary; during his assigned class periods, Mace helped students complete their assignments and encouraged them to do their best; through his volunteerism, Mace built a strong relationship with the students in the class; participated in the Climb for Cancer Sports Camp, an annual event that brings children who have had cancer to our practice facility to have a day of sports; group leader and helped adapt drills to each child’s needs; has contributed 22.5 official hours of outreach to the above causes alone.

Georgia – Riley King, INF/OF, Sr., Lawrenceville, Ga.
King is a team captain who graduated in December of 2020 and returned for final season in 2021. He plans to pursue medical school once baseball career is over (was drafted by Atlanta Braves in 2019). He is a four-year member of the SEC Academic Honor Roll. King is one of the baseball reps on the Student-Athlete Advisory Committee who helped organize community service efforts. His community service activities include: spearheaded efforts of team in Dawgs for Pups initiatives to help out community with Wifi Drive, Food2Kids Snack Drive, Coat Drive, #DawgsToThePolls voter-education series; started “G Series” on Instagram Live to discuss social justice issues with teammates and fans.

Kentucky – Alex Degen, Jr., P, Readington Township, N.J.
Degen is a two-time SEC Academic Honor Roll member. He has completed more than 135 hours of community service while at Kentucky. He is deeply involved with the Ronald McDonald House, where he has served dinner, cleaned residents’ rooms, washed dishes and more. The social work major also has served at a local elementary school as a mentor for children with difficult home situations and who were showing signs of falling behind in school, as well as with God’s Pantry.

Ole Miss – Tim Elko, Sr., IF/OF, Lutz, Fla.
Tim Elko has served as a team captain in 2021 and 2021 and is a member of the Student-Athlete Advisory Committee and a three-time member of the SEC Academic Honor Roll. He was named to the 2020 SEC Community Service Team. His community service activities include: Fellowship of Christian Athletes; Adopt-A-Basket- the athletics department donated over 90 Thanksgiving baskets in Fall 2020 to families in need throughout the Lafayette-Oxford-University Community (LOU); Le Bonheur Children’s Hospital Virtual Visits- Virtually visited with youth patients at Le Bonheur Children’s Hospital; virtual Classroom Drop-Ins- Surprised various LOU classrooms with a virtual reading session; Reading with the Rebels- Recorded reading videos to distribute to local elementary schools; helped assemble over 500 backpacks filled with non-perishable food items to donate to children in Tunica County and Quitman County for the Feed The Sip initiative; A Night To Shine- celebrated 125 guests with special needs during an unforgettable prom night; Unified Egg Bowl- Cheered on the Ole Miss Special Olympics team during the Annual Unified Egg Bowl vs Mississippi State’s Special Olympics Team;  Bats and Balls Clinic – Taught baseball basics to children in the Oxford/Lafayette community.

Mississippi State – Stone Simmons, So., P, Houston, Texas
Simmons’ community service activities include: participant in the Starkville Auxiliary Reading Railroad to recorded book readings for children to use during the COVID-19 quarantine; participated in the Children’s Hospital video where the student-athletes recorded videos of themselves sending encouraging and positive messages to lift the spirits of the patients.

South Carolina – Cam Tringali, Jr., P, Columbia, S.C.
Cam Tringali was named to the 2019-20 SEC Spring Honor Roll and the SEC Community Service Team in 2020 and the 2018-19 SEC Spring Academic Honor Roll. His community service activities include: donated school supplies to the Backpack Project for WG Sanders Middle School; wrote Christmas Cards for the local children’s hospital in Columbia; has helped in the past with the Ray Tanner Run and the Week of Giving at Heathwood Hall in his hometown; has helped host the Screaming Eagles from Chapin, SC at Founders Park.

Tennessee – Redmond Walsh, Sr., P, Louisville, Tenn.
On top of being one of Tennessee’s most valuable relief pitchers this season and throughout his career, Redmond Walsh has also been one of the team’s most active players when it comes to community service. The redshirt senior has participated in numerous community service events and volunteered his time with multiple organizations around Knoxville such as the Knoxville Challenger League, a local baseball league for young people with special needs. Walsh has also volunteered at the East Tennessee Children’s Hospital and Tennessee’s annual VOLoween event, which serves as a night of Halloween fun for the children of athletic department staff to interact with UT student-athletes.

Texas A&M – Alex Magers, So., P, D’Hanis, Texas
Alex Magers’ community service activities include: led the Aggies with nearly $2,500 raised in their annual Vs. Cancer campaign to raise money to fight pediatric cancer; ranked second on the team in money raised for Vs. Cancer in 2020 with $2,200, for a two year total of $4,600; active in the D’Hanis Rotary Club where his work includes, assisting with local can drives and volunteering at local food pantry; assisted with annual local D’Hanis Big Event doing community service house and landscaping projects in the neighborhood.

Vanderbilt – Will Duff, So, UTL, Springfield, Mo.
Since arriving at Vanderbilt, Will Duff has been an active member in the Nashville and state of Tennessee community. This past year, Duff was heavily involved in Vanderbilt’s Dancing Dores, a program that is made up of student-athletes participating in Vanderbilt University Dance Marathon. The program enables teammates to build relationships with local children and families served at Children’s Hospital, all while fundraising on their behalf. Duff assisted the Commodore baseball team in raising over $4,000 this year in the Dancing Dores program. The Springfield, Missouri, native also participated in various virtual school reading opportunities with local schools and hospitals since the summer.