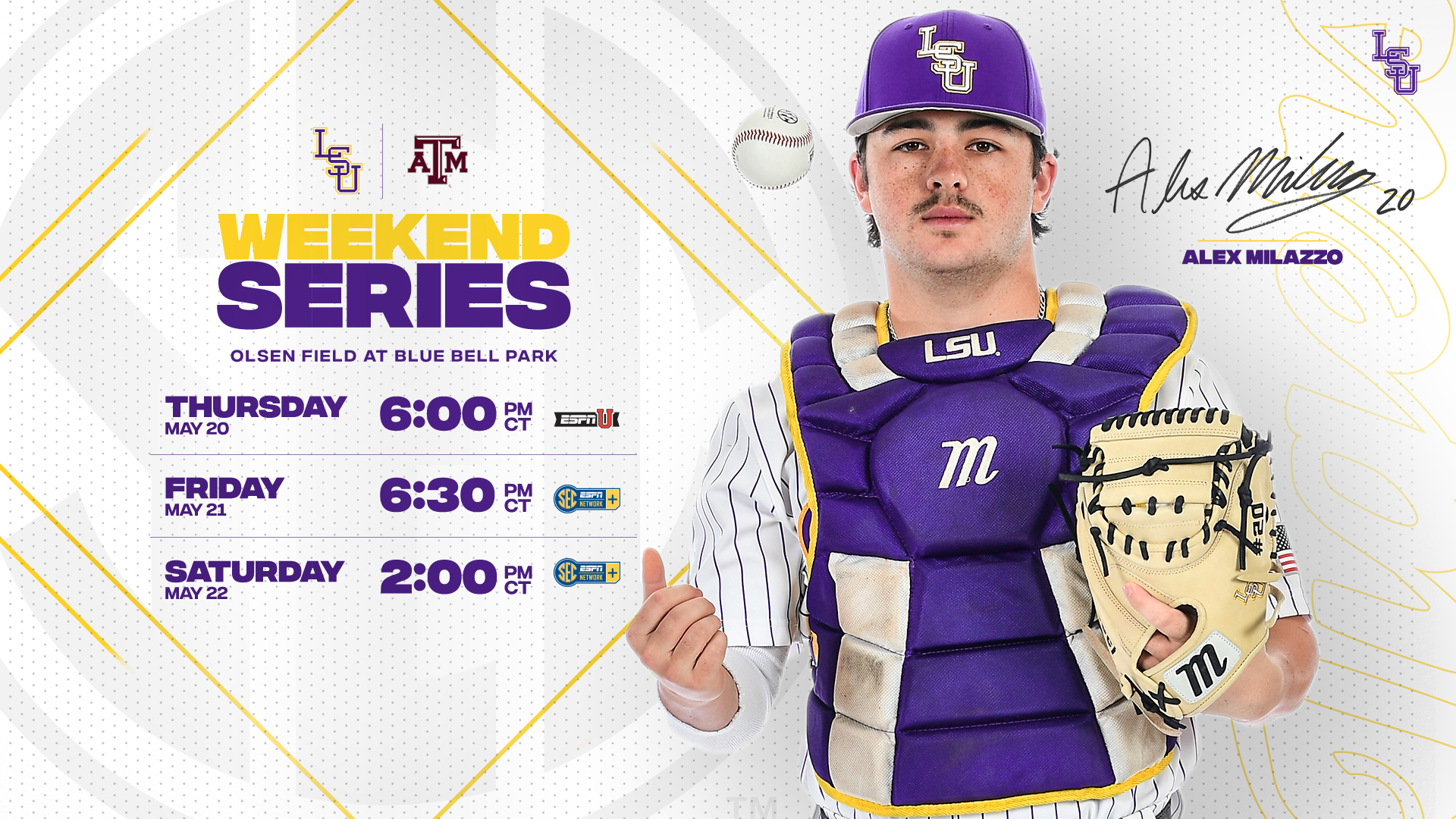 TV/ONLINE
•    Thursday’s game will be televised on ESPNU
•    All 3 games will be streamed SEC Network +, accessible at Watch ESPN.com and the Watch ESPN app

SERIES RECORD VS. TEXAS A&M
•    Texas A&M leads the series, 25-23-1, and the first meeting between the teams occurred in 1907 in Baton Rouge (a 3-2 LSU win). The Aggies have won three of the past four SEC series over LSU, but the Tigers posted a 2-1 series win in the teams’ most recent meeting in 2019 in Baton Rouge. The Aggies have a 11-10 lead in the 21 games played between the schools since Texas A&M began playing baseball in the SEC in 2013. Nine of the 21 games have been decided by one run. This weekend’s series marks LSU’s fifth visit to Bryan-College Station since the Aggies joined the SEC – LSU won two of three games over the Aggies in 2013, but Texas A&M has captured the last three series between the clubs at Blue Bell Park (2014, 2016, 2018).

•    Prior to 2013, the most recent meeting between the teams came in the 2004 NCAA Super Regional in Baton Rouge, as LSU swept two games to advance to the College World Series. One of LSU’s most famous matchups with Texas A&M came 32 years ago in May, 1989, when the Tigers defeated the top-ranked Aggies twice on the final day of the NCAA Central Regional in Bryan-College Station to advance to the College World Series.

QUOTING PAUL MAINIERI
“We’ve got a job to do this weekend at Texas A&M. They’re going to play us really tough, and we know we need to be ready. We’ve got to play really well in order to win games against them. Our kids have a positive mindset and will play this weekend with confidence. We’ll just take each game one at a time and leave it all out on the field.”

ABOUT THE TIGERS
LSU is No. 22 in the most recent official NCAA RPI rankings, and the Tigers are ranked No. 3 nationally in strength of schedule … LSU will qualify for the 12-team SEC Tournament field with one win this weekend at Texas A&M … the Tigers currently hold the No. 10 seed in the SEC Tournament bracket, which begins on Tuesday, May 25 … LSU is No. 11 in the nation in home runs this season with 74 … LSU has won four of its last six SEC series, and the Tigers have won seven of their last 10 games overall … three of LSU’s four SEC series victories this season have come on the road – at Kentucky, at Ole Miss and at Auburn.

Gavin Dugas
Junior leftfielder Gavin Dugas was named SEC Co-Player of the Week on Monday after leading LSU to an SEC series victory over Alabama … Dugas batted .429 (6-for-14) in four games last week with one double, two homers, eight RBI, five runs scored and a .526 on-base percentage … in LSU’s series win versus Alabama, Dugas hit .364 (4-for-11) with one double, two homers, five RBI, four runs, one stolen base and a .429 on-base percentage … he also drove in three runs and scored three times in LSU’s win over 14th-ranked Louisiana Tech on May 11 … Dugas enters the Texas A&M series No. 2 in the SEC in RBI with 57.

Dylan Crews
Freshman outfielder Dylan Crews is hitting .357 (15-for-42) in his last 10 games with four doubles, one triple, two homers and 12 RBI … in LSU’s series win over Alabama, Crews hit .429 (6-for-14) with two doubles, one homer, four RBI, four runs, and a .429 on-base percentage … Crews was 3-for-5 in LSU’s series-clinching win over the Crimson Tide on Sunday with two doubles, two RBI and three runs scored.

Landon Marceaux
Junior right-hander Landon Marceaux fired 6.1 shutout innings last Friday to defeat Alabama … he scattered 11 hits – including 10 singles – with one walk and six strikeouts … Marceaux improved to 6-4 on the season and lowered his ERA to 2.15 in 79.2 innings this season … Marceaux has recorded 97 strikeouts, and he is limiting opponents to a .223 cumulative batting average … he is No. 2 in the SEC in innings pitched, No. 3 in strikeouts, No. 4 in ERA and No. 10 in opponent batting average.

Ma’Khail Hilliard
Since moving into the SEC weekend starting rotation, senior right-hander Ma’Khail Hilliard is 2-0 in three starts with a 2.60 ERA in 17.1 innings … Hilliard has recorded 16 strikeouts and limited opponents to a .169 batting average … he has posted wins over top-ranked Arkansas and over Alabama, and he has a no-decision versus Auburn in which he worked 7.1 innings and allowed just one run on four hits with no walks and six strikeouts.

Hitting Leaders
Centerfielder Giovanni DiGiacomo was 5-for-9 in the Alabama series with two homers, four RBI and two runs scored … his two homers both came in Sunday’s 13-5 win over the Crimson Tide … prior to Sunday’s game, DiGiacomo had one career LSU home run, which came on May 22, 2019, against Mississippi State in the SEC Tournament at Hoover, Ala. … second baseman Drew Bianco has reached base in 16 straight games, and third baseman Cade Doughty has reached base in 15 consecutive contests.

ABOUT THE AGGIES
•    Texas A&M is currently 13th in the conference standings and is attempting this weekend to qualify for the SEC Tournament; the top 12 teams in the final regular-season league standings qualify for the tournament … the Aggies and Auburn are tied with 8-19 league records, but Auburn currently holds the No. 12 seed by virtue of its series win over Texas A&M.
•    The Aggies are No. 12 in the SEC in team batting average (.263), and they have 64 homers and 61 steals in 72 attempts … first baseman Will Frizzell is hitting .344 on the year with 12 doubles, 18 homers and 48 RBI … he is No. 1 in the SEC in total bases (133) and slugging percentage (.682), No. 3 in the league in homers and No. 8 in RBI.
•    The Texas A&M pitching staff is No. 8 in the SEC with a 4.35 cumulative ERA … the Aggies average 10.36 strikeouts per nine innings … senior left-hander Dustin Saenz is No. 5 in the SEC in strikeouts (96); senior left-hander Chandler Jozwiak is No. 2 in the league in saves with seven.

LSU pitcher AJ Labas has signed a free agent deal with the Minnesota Twins, and he will be assigned to a team in the Twins’ minor league organization.
D1 Baseball Recognizes Three LSU All-Americans