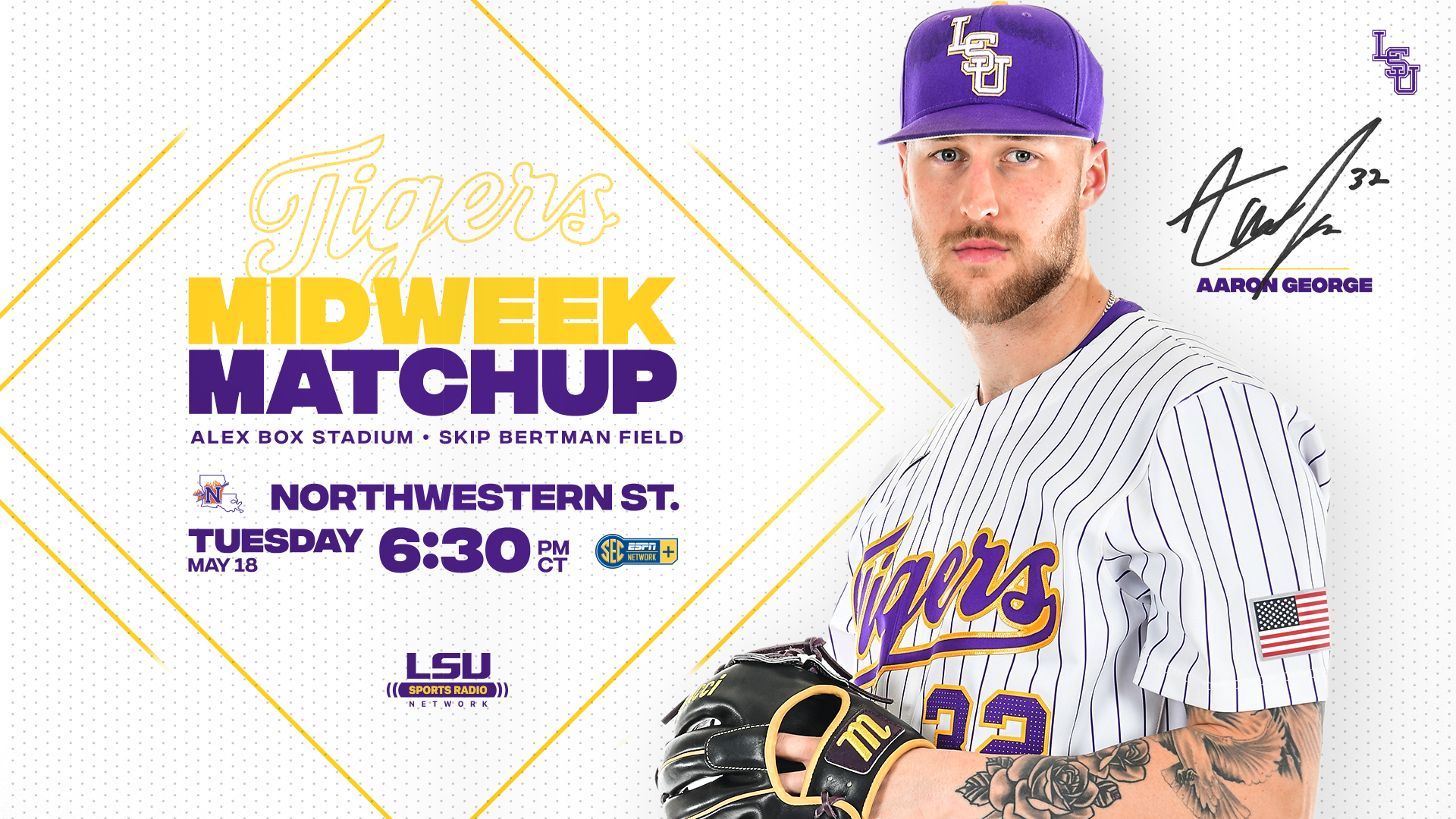 May 18, 1 p.m. CT Update: Game time has been moved up from 6:30 p.m. CT to 5 p.m. due to the weather forecast. LSU officials encourage fans that plan to attend the game to travel with extreme caution and be mindful of road closures on the drive  to campus.

SERIES RECORD VS. NORTHWESTERN STATE
LSU leads the series with Northwestern State, 59-12, and the Tigers have won 21 of the past 23 matchups; however, the Demons defeated the Tigers, 3-1, on March 12, 2019, in Natchitoches in the most recent meeting between the schools. The Demons’ only other win in the past 23 games with LSU was a 5-2 victory on April 12, 2011, in Alex Box Stadium, Skip Bertman Field. LSU coach Paul Mainieri has a 14-2 career mark against Northwestern State.

QUOTING PAUL MAINIERI
“I feel like our team is playing its best baseball of the year, and I want to see our players get an opportunity to play in the postseason. I think we can be a team to be reckoned with. The Northwestern State game is a big game for us; we need to win in order to enhance our chances to receive an NCAA Tournament bid. Northwestern State has an outstanding program, and they beat us the last time we faced them two years ago. We’ve played very well in our midweek games this season, and we’ll need to do the same in order to have success on Tuesday night.”

ABOUT THE TIGERS
LSU is No. 18 in the most recent official NCAA RPI rankings, and the Tigers are ranked No. 3 nationally in strength of schedule … LSU will qualify for the 12-team SEC Tournament field with one win this weekend at Texas A&M … the Tigers currently hold the No. 10 seed in the SEC Tournament bracket, which begins on Tuesday, May 25 … LSU is No. 10 in the nation in home runs this season with 74 … the Tigers play their final midweek game of the season on Tuesday versus Northwestern State – LSU is 12-0 this season in its midweek, non-SEC contests … LSU has won four of its last six SEC series, and the Tigers have won seven of their last nine games overall.

Gavin Dugas
Junior leftfielder Gavin Dugas helped lead the Tigers to three wins in four games last week, including an SEC series victory over Alabama … Dugas batted .429 (6-for-14) in four games with one double, two homers, eight RBI, five runs scored and a .526 on-base percentage … in LSU’s series win versus Alabama, Dugas hit .364 (4-for-11) with one double, two homers, five RBI, four runs, one stolen base and a .429 on-base percentage … he drove in three runs and scored three times in LSU’s win over 14th-ranked Louisiana Tech on Tuesday … Dugas is hitting .301 this season with 12 doubles, one triple, 14 homers and 44 runs, and he leads the SEC in RBI with 57.

Landon Marceaux
Junior right-hander Landon Marceaux fired 6.1 shutout innings on Friday to defeat Alabama … he scattered 11 hits – including 10 singles – with one walk and six strikeouts … Marceaux improved to 6-4 on the season and lowered his ERA to 2.15 in 79.2 innings this season … Marceaux has recorded 97 strikeouts, and he is limiting opponents to a .223 cumulative batting average … he is No. 2 in the SEC in innings pitched, No. 3 in strikeouts, No. 4 in ERA and No. 10 in opponent batting average.

Hitting Leaders
Centerfielder Giovanni DiGiacomo was 5-for-9 in the Alabama series with two homers, four RBI and two runs scored … his two homers both came in Sunday’s 13-5 win over the Crimson Tide … prior to Sunday’s game, DiGiacomo had one career LSU home run, which came on May 22, 2019, against Mississippi State in the SEC Tournament at Hoover, Ala. … first baseman Tre’ Morgan is riding a 10-game hit streak entering Tuesday’s game versus Northwestern State … second baseman Drew Bianco has reached base in 15 straight games, and third baseman Cade Doughty has reached base in 14 consecutive contests.