The LSU Tigers completed their first postseason meet of the outdoor season, finishing with nine total event winners at the SEC Championships at the E.B. Cushing Stadium.  The women’s team placed second overall and finished with a total of 120.5 points while the men’s squad scored 108 points to finish in third place. 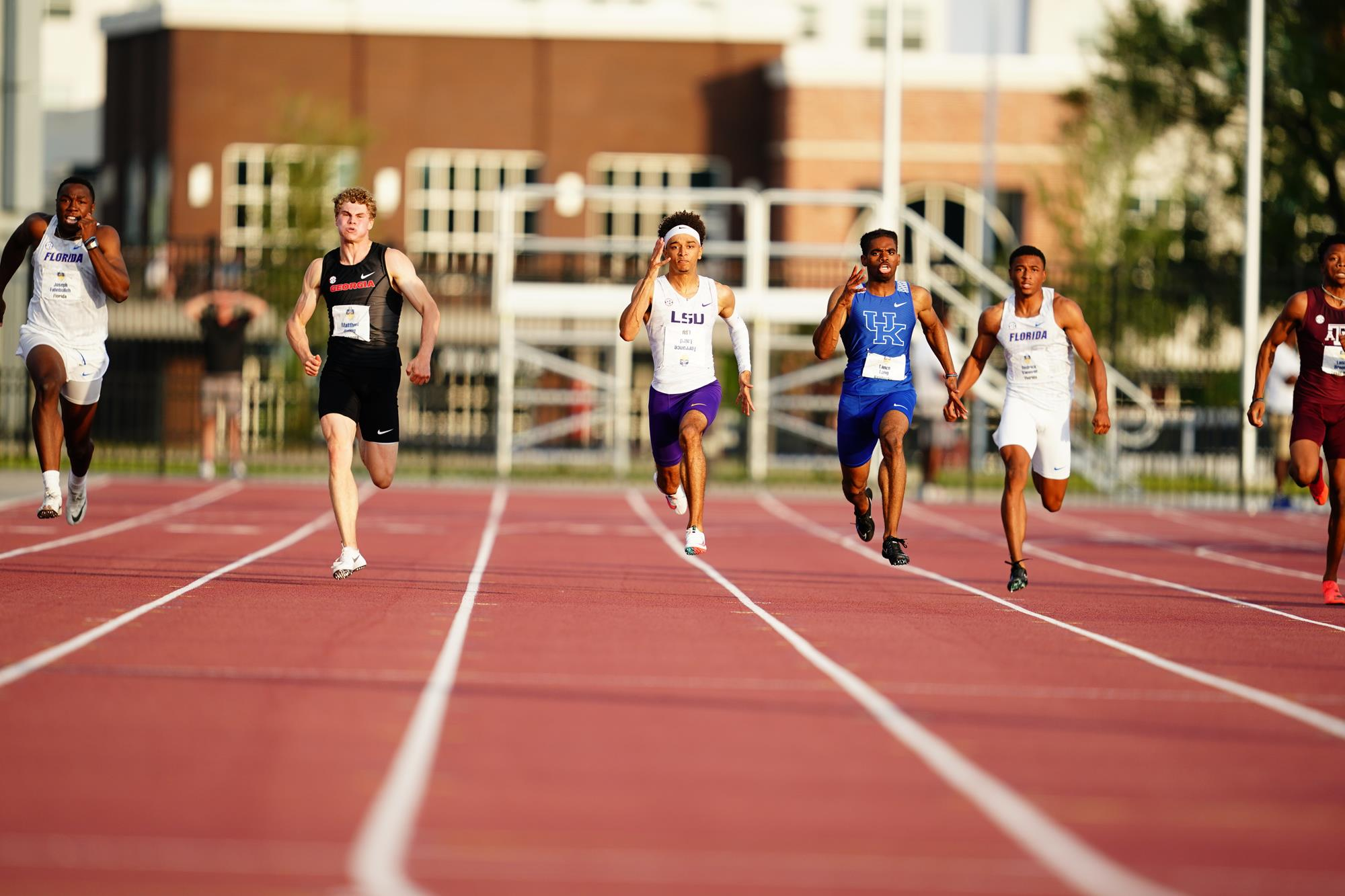 College Station, Texas  –  The LSU track and field team won seven event titles on the final day of the SEC Outdoor Championships as the women claimed a second place finish with 120.5 points, and the men took third with a final score of 108 points.

The women’s and men’s 4×100 meter relays started off the final day of action on the track with two stellar performances. The women’s foursome – Tonea Marshall, Favour Ofili, Symone Mason, Thelma Davies – clocked a world leading and SEC championship winning time of 42.52 seconds to run away from the field. The men’s crew – Dylan Peebles, Noah Williams, Dorian Camel, Terrance Laird – won with a readout of 38.87 thanks to a chase down by Laird on the final leg. It was the fifth straight SEC titles for LSU in both the women’s and men’s 4×100 meter relay. You’d have to go back to 2015 to find another winner of the 4×100 meter relay at the SEC meet not named LSU.

Terrance Laird was on an absolutely different level from the rest of the field on Saturday as he anchored the 4×100 meter relay to a title, and won individual titles in the 100 meters and 200 meters. Following the 4×1 at 5 p.m., he returned to the track at 6:25 p.m. for the 100 meters. He dashed out to a commanding win with a time of 9.80 seconds that was aided by a helping wind of 3.2 meters per second. He came back and completed the triple sweep with a win in the 200 meters at 7:25 p.m. with a wind legal time of 19.82 that broke Justin Gatlin’s SEC meet record (19.86) from 2002. Laird becomes the first LSU sprinter to accomplish this feat since Nethaneel Mitchell-Blake did so in 2016. Laird’s windy time of 9.80 seconds in the 100 meters is the fifth fastest all-conditions time in collegiate history, and he now owns the fourth and fifth fastest in collegiate history in the 200 meters with his 19.81 and 19.82.

The women’s hurdle crew racked up a massive 37 points between the 100 and 400 hurdles in what helped LSU make a push for the team title. In the 400 meter hurdles, Brittley Humphrey won her first ever SEC title with a season best time of 56.14 in the 400 meter hurdles. Milan Young took second with a time of 56.54, Jurnee Woodward clocked a 57.69 for fourth, and Leah Phillips placed sixth (57.87). Tonea Marshall won her first career SEC individual outdoor title with a wind-aided time of 12.62 seconds in the 100 hurdles and Young also finished eighth in that race with a time of 13.18. Marshall was LSU’s first winner at the SEC meet in the 100 meter hurdles since 2012 when Jasmin Stowers won the event.

The final SEC championship performance of the day came out of Noah Williams in the 400 meters. He remained composed, stuck to his race plan and won with a time of 44.37 to become LSU’s first winner in the outdoor 400 meters at the SEC meet since Xavier Carter did so in 2006. Tyler Terry also turned in a scoring performance in the 400 with a readout of 45.54.

The women’s 4×400 meter relay closed out the meet by placing fifth with a time of 3:31.73; the squad was made up by Symone Mason, Amber Anning, Milan Young, and Favour Ofili.