College Station, Texas  –  JuVaughn Harrison won the high jump title with the one of the most impressive performances in collegiate history, and freshman Emma Robbins made history as she claimed the women’s hammer throw title to highlight day two of action at the SEC Outdoor Championships at E.B. Cushing Stadium. 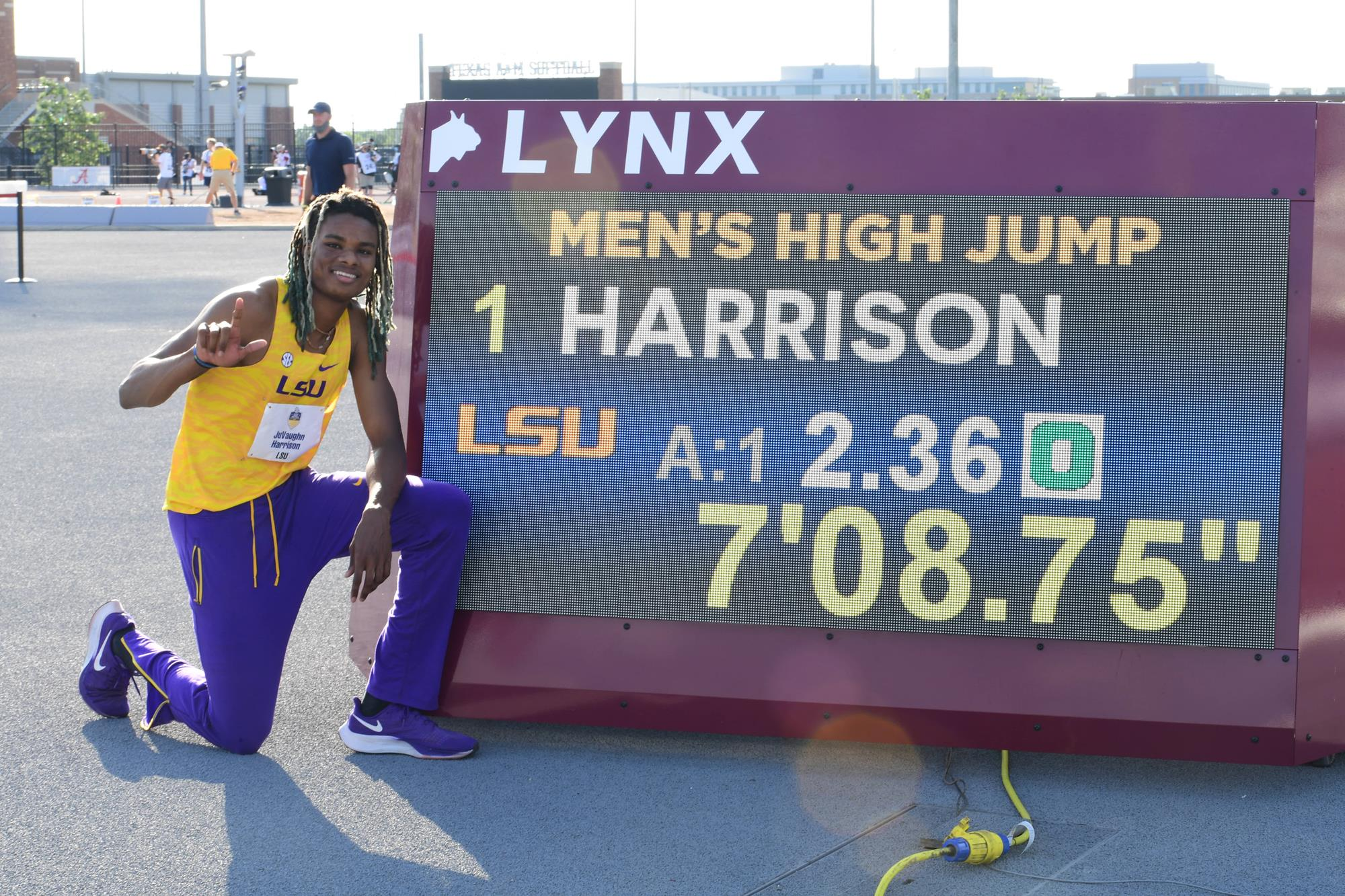 College Station, Texas  –  JuVaughn Harrison won the high jump title with the one of the most impressive performances in collegiate history, and freshman Emma Robbins made history as she claimed the women’s hammer throw title to highlight day two of action at the SEC Outdoor Championships at E.B. Cushing Stadium.

It was business per usual for world class jumper JuVaughn Harrison on Friday as he scored 18 total points for LSU on the day. His day started with an immaculate performance in the high jump as he cleared a personal best of 7′ 8.75″ (2.36 meters) in an epic performance. To put the clearance in perspective, he jumped over the tallest player in NBA history, Gheorghe Muresan, who stood at 7′ 7″ and was drafted by the Washington Bullets in 1993.

He moved over to the long jump pit after a brief break and took second place with a mark of 27′ 0.50″ (8.24 meters) for eight points. He was actually in the lead the whole event until round six when Tennessee’s Carey McLeod went 27′ 4.50″ (8.34 meters) to take over the lead. Harrison, who passed in rounds four and five, fouled on his last attempt for the sweep.

Robbins, a freshman from Anaheim, California, became LSU’s first female winner in program history in the hammer throw at the SEC Championships with her career best toss of 220′ 4″ (67.17 meters) to get the day started for LSU. The mark of 220′ 4″ also moved her from No. 2 on the LSU all-time list to the top spot as she passed Denise Hinton (218′) for the school record that Hinton had owned since 2014. She entered the meet with the third best mark in the SEC this season and now sits atop that list. The mark also moved her up to No. 9 on the NCAA list this season.

The only other scorers for LSU on day two were Aliyah Whisby and Serena Bolden in the long jump, and Lisa Gunnarsson in the pole vault. Whisby took fifth with a wind-aided jump of 21′ 3.25″ (6.48mw), and Bolden scored with a performance of 20′ 3.75″ (6.19 meters). It was the first time Bolden has scored at an SEC meet in her career. Gunnarsson tied for second with a clearance of 14′ 8.75″ (4.49 meters) to register seven points for the Tigers.

The rest of the day consisted of more and more qualifying for LSU setting themselves up for a busy Saturday, including one performance that ranked inside the collegiate all-time top 10 list. Tonea Marshall ran a career best of 12.52 seconds in her 100 meter hurdle preliminary race to become the sixth fastest collegian of all time an better her previous school record by five hundredths of a second. She’ll be joined in the finals of the short hurdles on Saturday by teammates Milan Young and Alia Armstrong.

Women’s 100m Hurdles@ToneaAlexis_ just became the sixth fastest performer in collegiate history… IN PRELIMS with a time of 12.52! That’s an LSU school record and it ranks as No. 4 in the world in 2021!#GeauxTigers pic.twitter.com/xUZ6OedUFb

The men’s 110 meter hurdling group got three guys through as well with Damion Thomas, Eric Edwards Jr. and Arthur Price III all advancing. In the 100 meter dash, Symone Mason will represent the women, and Terrance Laird will represent the men. Noah Williams and Tyler Terry both won their preliminary heats to move on to the finals in the 400 meter dash.

LSU has a total of 40 scoring chances on Saturday between the men and the women. The LSU men are in fourth with 38 points, and the women are currently in sixth with 26 points.