Baton Rouge, La.  –  The 2021 SEC Outdoor Track & Field Championships will take place Thursday through Saturday, May 13-15, at E.B. Cushing Stadium on the campus of Texas A&M. The three day meet will feature a loaded field of talented teams in what is considered the most competitive conference in the whole nation. 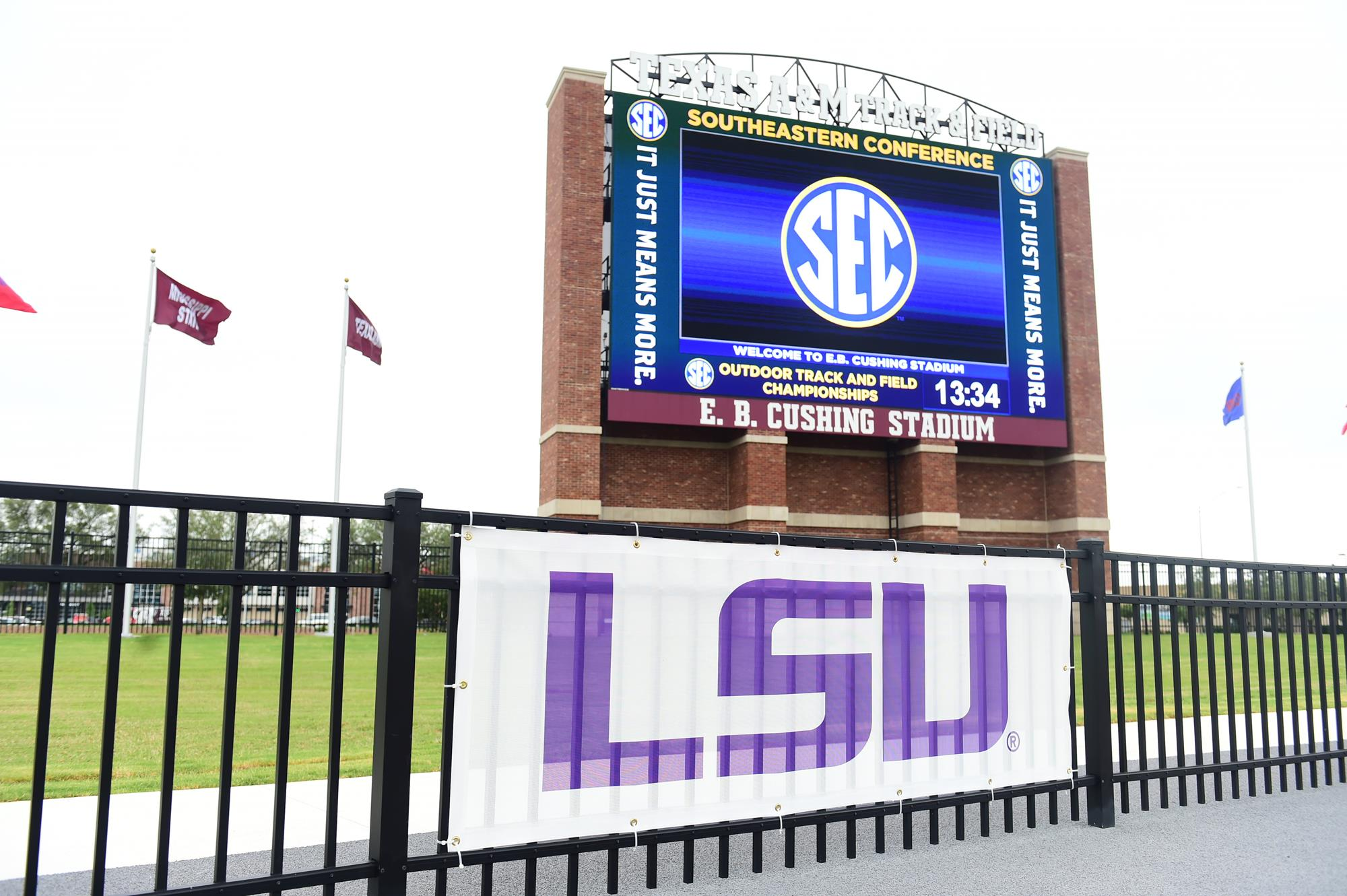 Baton Rouge, La.  –  The 2021 SEC Outdoor Track & Field Championships will take place Thursday through Saturday, May 13-15, at E.B. Cushing Stadium on the campus of Texas A&M. The three day meet will feature a loaded field of talented teams in what is considered the most competitive conference in the whole nation.

LSU will take 52 (26 women, 26 men) athletes on the road to Texas to compete at the first postseason meet of the year outdoors. The first two days of the meet will be carried and covered on SEC Network+ while the final day of action will be shown live on the SEC Network Saturday evening from 5-9 p.m. CT. Thursday’s coverage will air from 5:40 to 9:30 p.m. CT and Friday’s live stream will go from 4:35-9:30 p.m. CT. Links to all three days of competition can be viewed below.

The hammer throwing trio of Jake Norris, Jon Nerdal, and Luke Witte get the meet started for LSU at 12 p.m. CT on Thursday afternoon. LSU will also have scoring opportunities on Thursday in the women’s javelin, men’s javelin and women’s 10,000 meters. A full competition guide can be viewed at the link above.

The LSU men return 54 of their 105 points scored at the 2019 SEC outdoor championship run, while the women have 45 points returning from a total of 83 in 2019 that earned them a fourth place finish.

LSU at the SEC Outdoor Championships

Christian Miller, JuVaughn Harrison and Jurnee Woodward are the three LSU athletes who have won individual SEC outdoor titles, all three of which came at the 2019 SEC meet. Miller won the triple jump on his final attempt of the SEC meet with a personal best mark of 53′ 0.25″ (16.16 meters). Harrison won the high jump title with a clearance of 7′ 4.25″ (2.24 meters), and Woodward was victorious in the 400 meter hurdles with a winning time of 56.77.

LSU has eight individuals in a total of 10 events that enter the meet with the top time/mark in the conference and are expected to compete for individual titles. Terrance Laird (100m/200m) and JuVaughn Harrison (high jump/long jump) are favored in two events and the other conference leaders are Favour Ofili (200 meters), Noah Williams (400 meters), Tonea Marshall (100m hurdles), Damion Thomas (110m hurdles), Sean ‘Squirrel’ Burrell (400m hurdles), and Jurnee Woodward (400m hurdles).

You can expect big points from the women’s hurdles crew in the 100 and 400 meter hurdles. Two years ago, the trio of Jurnee Woodward (1st), Brittley Humphrey (2nd) and Milan Young (3rd) swept the top three spots in the 400 meter hurdles to accrue 24 points for LSU’s team score. All three of them are back, and freshman Leah Phillips will have a solid chance of making the finals as she enters the meet as the No. 9 seed. Same thing in the 100 meter hurdles, Tonea Marshall and Alia Armstrong own the top two seeds entering the meet and Young ranks No. 5 in the conference.

The same is the case for the women in the 200 meters as LSU has three of the top five runners in the conference. Favour Ofili owns the SEC lead with a season best of 22.30 while Thelma Davies and Symone Mason rank No. 4 & 5 respectively within the conference.

Hammer throwers Jake Norris and Jon Nerdal enter the conference meet with the second and third best throws in the SEC this year and will look to get the men started off on the right foot with that being the first event scored in the whole meet. If the men’s hurdling duo of Damion Thomas (No. 1) and Eric Edwards Jr. (No. 3) finish where they are projected the would score 16 points.