Kloth and Nuss Named AVCA Beach Pair of the Year

BATON ROUGE – Taryn Kloth and Kristen Nuss’ standing as the best beach pair in the nation was solidified on Wednesday when they were named the first ever AVCA Beach Pair of the Year, headlining this year’s All-America team after going 36-0 on Court 1 throughout the spring. 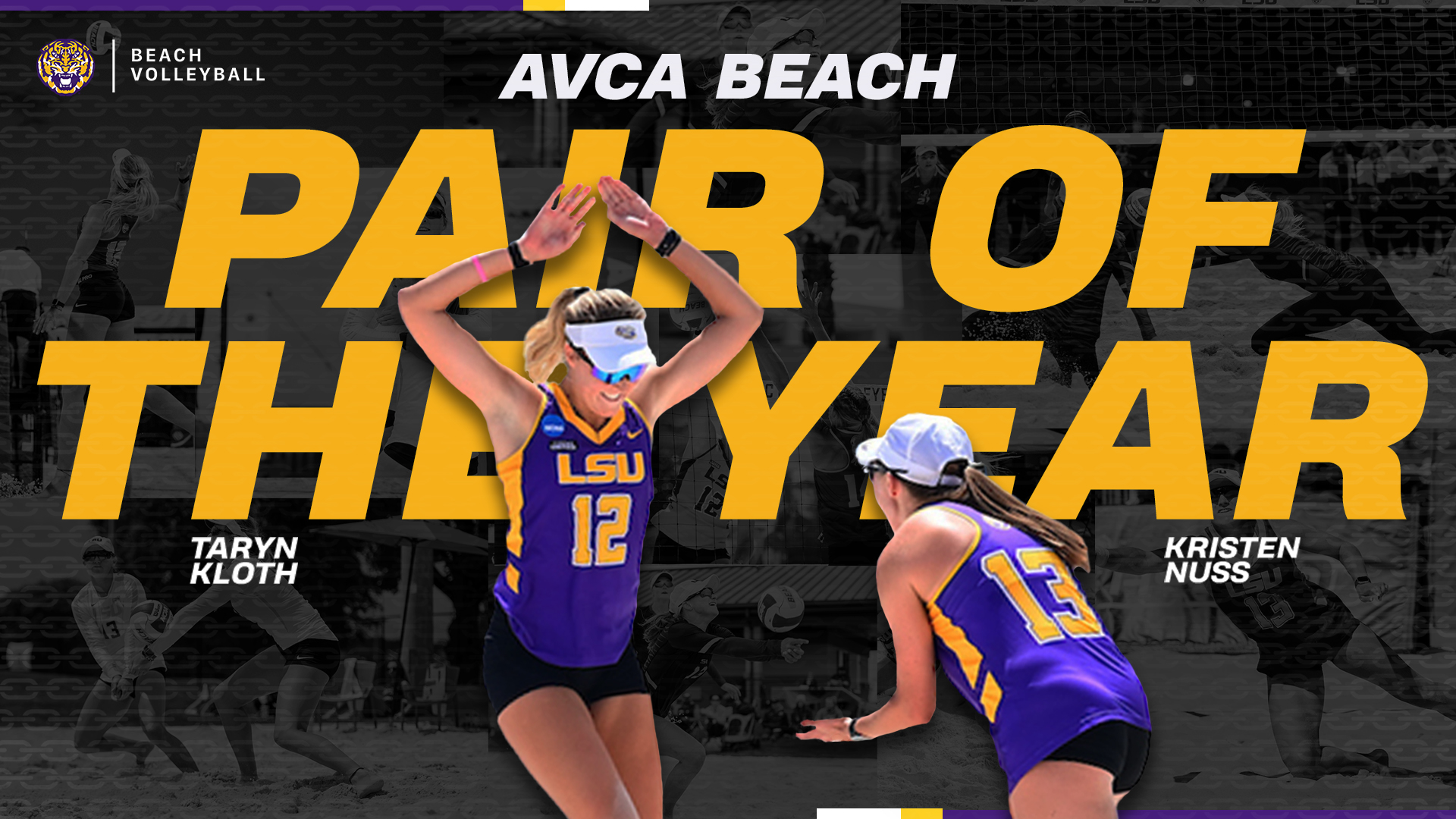 BATON ROUGE – Taryn Kloth and Kristen Nuss’ standing as the best beach pair in the nation was solidified on Wednesday when they were named the first ever AVCA Beach Pair of the Year, headlining this year’s All-America team after going 36-0 on Court 1 throughout the spring.

This puts an end to both of their careers at LSU. Nuss, with 139 career victories, walks away as the winningest player in the history of college beach volleyball. The New Orleans, La. native won the final 48 matches of her career going back to the 2020 season when she and Claire Coppola became the third beach pair ever to win 100 matches together.

A letter from Kristen Nuss

Kloth has not lost a match since April of 2019 before she was left out of the lineup for that year’s NCAA Championship. The Sioux Falls, S.D. native won the final 50 matches of her LSU career. Kloth was 14-0 on Court 4 in 2020 in a season in which she did not drop a set, including going 13-0 with Kelli Greene-Agnew.

A letter from Taryn Kloth

The South Dakota native solidified herself inside the LSU record book, winning the final 50 matches of her career.

She made the jump to Court 1 with Nuss after the duo had great success over the offseason competing in tournaments against professional level competition. Kloth and Nuss announced earlier Wednesday that they will begin competing professionally next month.

Kloth and Nuss went 36-0 in 2021 and dropped just four sets throughout the entire season, proving to be too much to handle for anybody that stepped in the sand across from them. The only other college beach pair to ever go 36-0 on Court 1 is USC’s Kelly Claes and Sara Hughes who did it in 2016.

Twenty of their wins came against pairs on the top court from AVCA Top-20 teams. Of those 20 wins, 14 came against teams ranked inside the Top-10.

During the Tigers’ trip to California in early April, Kloth and Nuss solidified themselves as the clear top pair in the country, going 4-0 against UCLA and USC’s No. 1 duos..

LSU had two matches against UCLA on Saturday where Kloth and Nuss faced the defending Pac 12 Pair of the Week of Lexy Denaburg and Savy Simmo, an All-American. In the first match against the Bruins, Kloth and Nuss faced their most difficult challenge of the season. They cruised through the first set, 21-14, but Denaburg and Simmo were able to force a third set when they took a tight second set, 23-21.

In the third set, Denaburg and Simo had Kloth and Nuss on the ropes. The LSU duo faced 12 match-point serves, but stayed firm and put on a masterclass in side-outs before ultimately winning the set and the dual, 27-25.

In the second match against Denaburg and Simmo, Kloth and Nuss won in straight sets.

The following day, Kloth and Nuss had two more matches against another top pair from USC that featured Tina Graudina, a qualified Tokyo Olyimpian in her home country of Latvia, and Sammy Slater, an All-American. Once again the first match of the day went to three sets, but Kloth and Nuss never wavered as the overall match against the Trojans was tied at two courts. Kloth and Nuss clinched the match for LSU in the third set on Court 1, propelling LSU to a victory over the team that ultimately won the National Championship.

Just like the day before against UCLA, after their first match went to three sets Kloth and Nuss took care of business in two sets in the second match vs. USC, capping off their perfect weekend in Los Angeles.

At the NCAA Championship, Kloth and Nuss thrived against the top competition and went 4-0 to finish their perfect season.

Their toughest match of the tournament was in an elimination match against Florida State, a team that LSU was 0-4 against throughout the season prior to their meeting in Gulf Shores. In the first set, Kloth and Nuss had their worst set of the season as they fell, 21-13.

Nuss called it a wake-up call for the pair later on and in the second set, they came out guns-a-blazing to force a third set, 21-14.

With LSU leading FSU 2-1 in the overall match and Court 3 on its way to a third set as well, Kloth and Nuss had the opportunity to keep the Tigers’ season alive with their first win over the Seminoles all season to send them home.

Kloth and Nuss stayed calm, cool and collected – just as they always did – and took the third set, 15-13, securing the victory for LSU.

Never In Doubt@tkloth10 and @kristennuss97 have ice in their veins.

The Tigers are moving on! pic.twitter.com/sGiPJVIsBR

The nation’s best pair finished their perfect season with their third win of the season over UCLA’s Denaburg and Simmo. LSU dropped the overall match to UCLA though, ending the Tigers’ season.