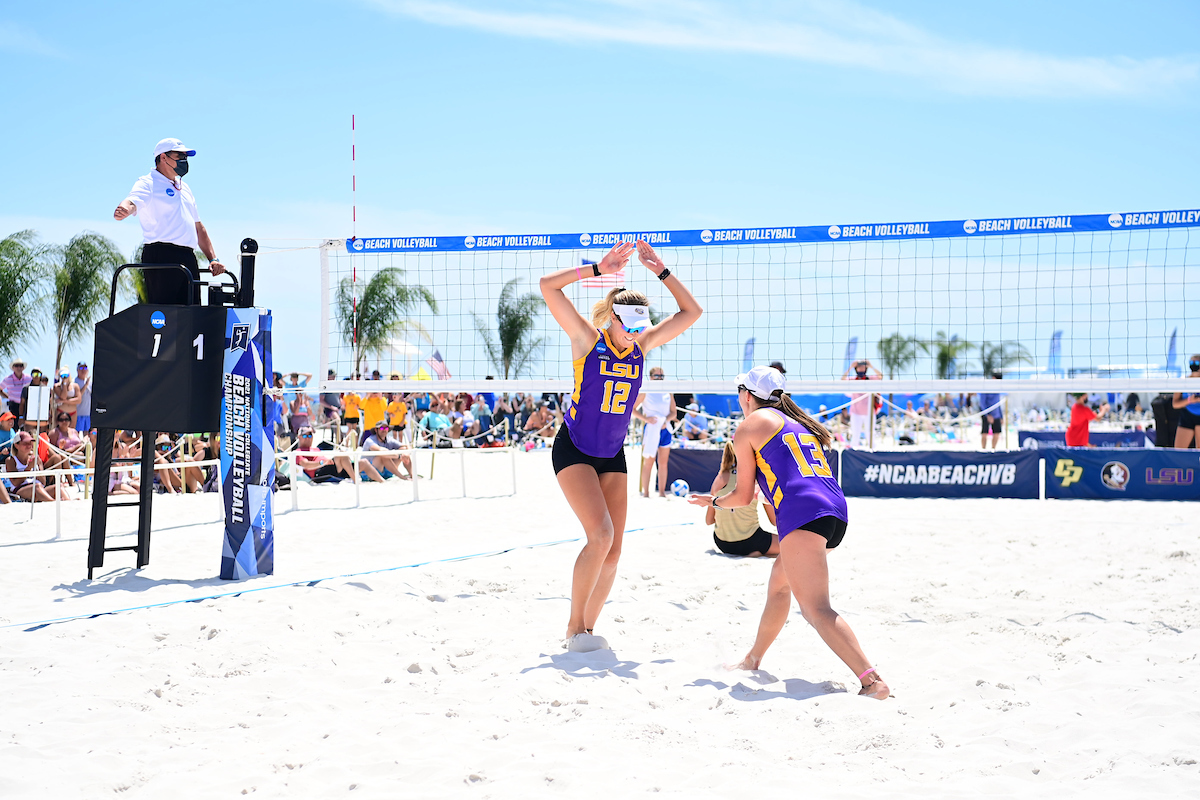 GULF SHORES, Ala. – No. 4 LSU had played No. 3 Florida State four times throughout the season before the teams matched up in an elimination dual Saturday at the NCAA Championship. The Tigers were 0-4 vs. the Seminoles.

The fifth time was the charm as LSU stayed alive in Gulf Shores, defeating FSU, 3-1, with wins on Courts 4, 5 and 1, in that order. LSU fell on Court 2 and Court 3 went unfinished.

Never In Doubt@tkloth10 and @kristennuss97 have ice in their veins.

The Tigers are moving on! pic.twitter.com/sGiPJVIsBR

LSU will face UCLA on ESPN2 at 5:30 p.m. CT this evening. The top-seeded Bruins defeated Cal Poly in an elimination dual earlier this afternoon. LSU is 0-2 vs. UCLA this season, playing both of those matches at Mapes Beach, UCLA’s home venue on its campus.

The four previous matches against FSU were razor thin, but the Tigers had been unable to come through. They pulled out the win when it mattered most on Saturday with their backs against the wall, ending FSU’s season.

Jess Lansman and Sydney Moore earned the first court for the Tigers on Court 4. They won in straight-sets after falling to Florida State two weeks ago on the deciding court of the CCSA Championship to FSU. Lansman and Moore won on Saturday, 21-16 and 21-19, evening the match at 1-1.

In the first set on Court 1, Taryn Kloth and Kristen Nuss dropped just their fourth set of the season, 21-13. With ice in their veins and their undefeated season on the line, Kloth and Nuss rolled in the second set, 21-14. The third set was tight, but never in doubt as Kloth and Nuss won, 15-13, improving to 35-0 on the season and keeping the Tigers’ national championship dreams alive.

Ashlyn Rasnick-Pope and Toni Rodriguez won the first set on Court 3, 21-15, before dropping the second set, 21-19. They led 11-6 in the third set when Kloth and Nuss clinched the match for LSU as Court 3 went unfinished.

Recovery will be key as the Tigers prepare for their third elimination match of the weekend later this evening.