LSU’s Run At NCAA Beach Championship Comes To An End 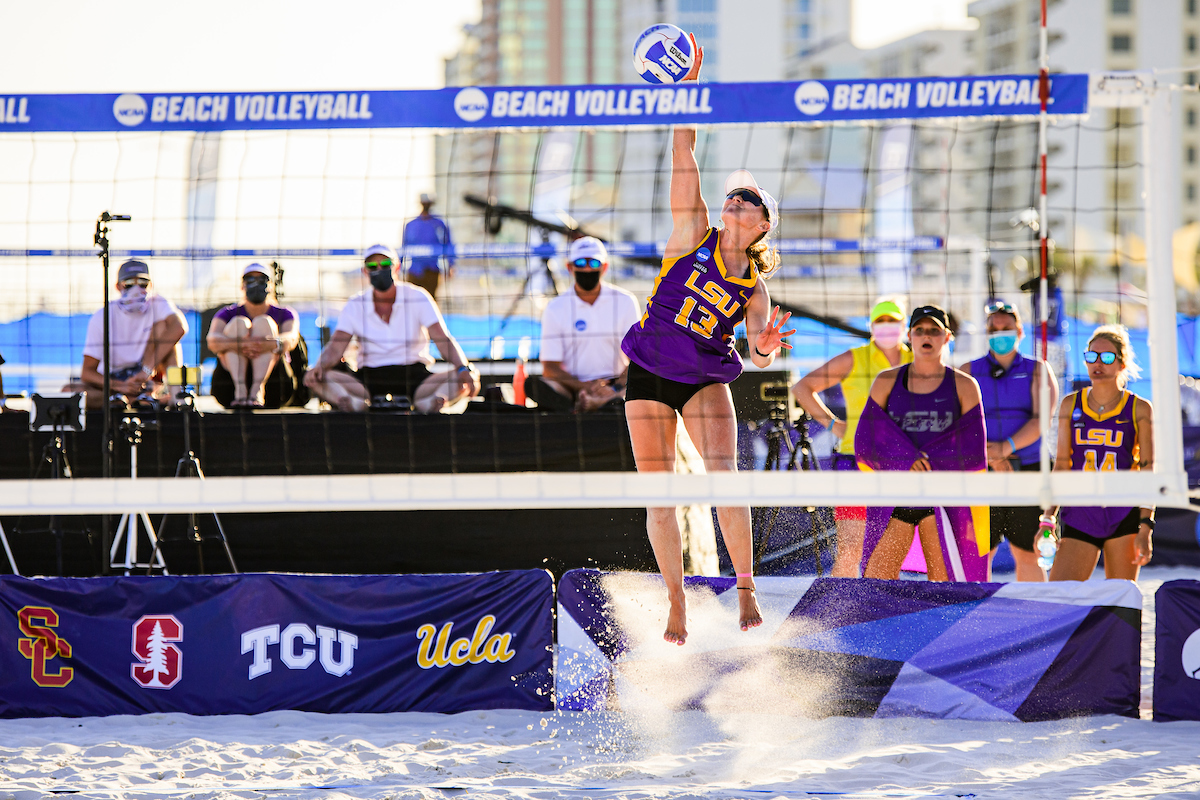 GULF SHORES, Ala.- The Tigers’ beach season came to an end Saturday evening in Gulf Shores when they fell to UCLA, 3-2. The match came down to the third set on Court 5 where LSU fell by the closest of margins, 15-13.

“I could not be more proud of this team,” said senior-leader Kristen Nuss, the winningest player in college beach volleyball history. “The way we fought until the very end is something that I will remember forever.

“We’ll forever be a team no matter the wins and losses.”

This marks the end of the road for the LSU Beach team that clawed its way back to being one of the final four teams standing after dropping its opening round match to Loyola Marymount. LSU finishes the season with a 27-9 record.

The Tigers finished the 2020 season as the No. 1 team in the country when it was cut short due to the COVID-19 pandemic. All six seniors from last year’s team returned to fight for a national championship one more time. The Tigers entered this season ranked in the same spot. LSU remained inside the top-four for the entire season.

“They risked this feeling to do it again,” said head coach Russell Brock. “That says a ton about their character and not just their ability.”

For Claire Coppola, Taryn Kloth, Jess Lansman, Toni Rodriguez, and Kristen Nuss, Olivia Ordonez and Kahlee York this is the end of the road for their careers at LSU. It is a group that has led LSU to become one of the nation’s top programs. Before they arrived in Baton Rouge, LSU had never made it to the NCAA Championship. Since they joined the program, LSU has not missed out on being one of the final eight teams invited to Gulf Shores.

“Anybody that has seen our team play the past five years has seen the body of work,” said Brock. “All the stats are almost incalculable. Even as we stand in the circle, it’s daunting to think about how we will replace them. It’s not just their skill. It’s their accountability level, the way that they commit to the program, their understanding of what it means to be who we are.

“Where we came from and where we are as a program, they are that. Without them it will be tough, but they will always be remembered fondly and as the greatest group that as ever put on the purple and gold.”

The match in the sand against the Bruins was intense and it came down to the bitter end.

Jess Lansman and Sydney Moore got the Tigers started with a strong performance on Court 4, 21-15 and 21-17.

Claire Coppola, who has 121 wins in her career (fourth most in college beach history), and Kelli Greene-Agnew fell on Court 2 as UCLA tied the overall dual, 21-19 and 21-13.

Taryn Kloth and Kristen Nuss capped off a perfect season on Court 1 as they won both sets by a score of 23-21.

Nuss finished her LSU career with 139 victories, the winningest player in the history of college beach volleyball.

As a pair, Kloth and Nuss finished the season 36-0 which ties the best record by an undefeated pair on Court 1 ever. Kelly Claes and Sarah Hughes from USC had the same undefeated record in 2016.

On Court 3, Ashlyn Rasnick-Pope and Toni Rodrgiuez fell, 23-21 and 21-18, as UCLA evened the match once again. Rodriguez finishes her seven-year LSU career after competing for both the indoor and beach programs.

The attention shifted to Court 5 where Olivia Ordonez and Kahlee York won the first set, 21-15, and dropped the second set, 21-19. The LSU duo battled back after trailing by three, 8-5. They were able to get the score within one but were unable to ever tie it up and UCLA took the third set, 15-13, claiming the match.