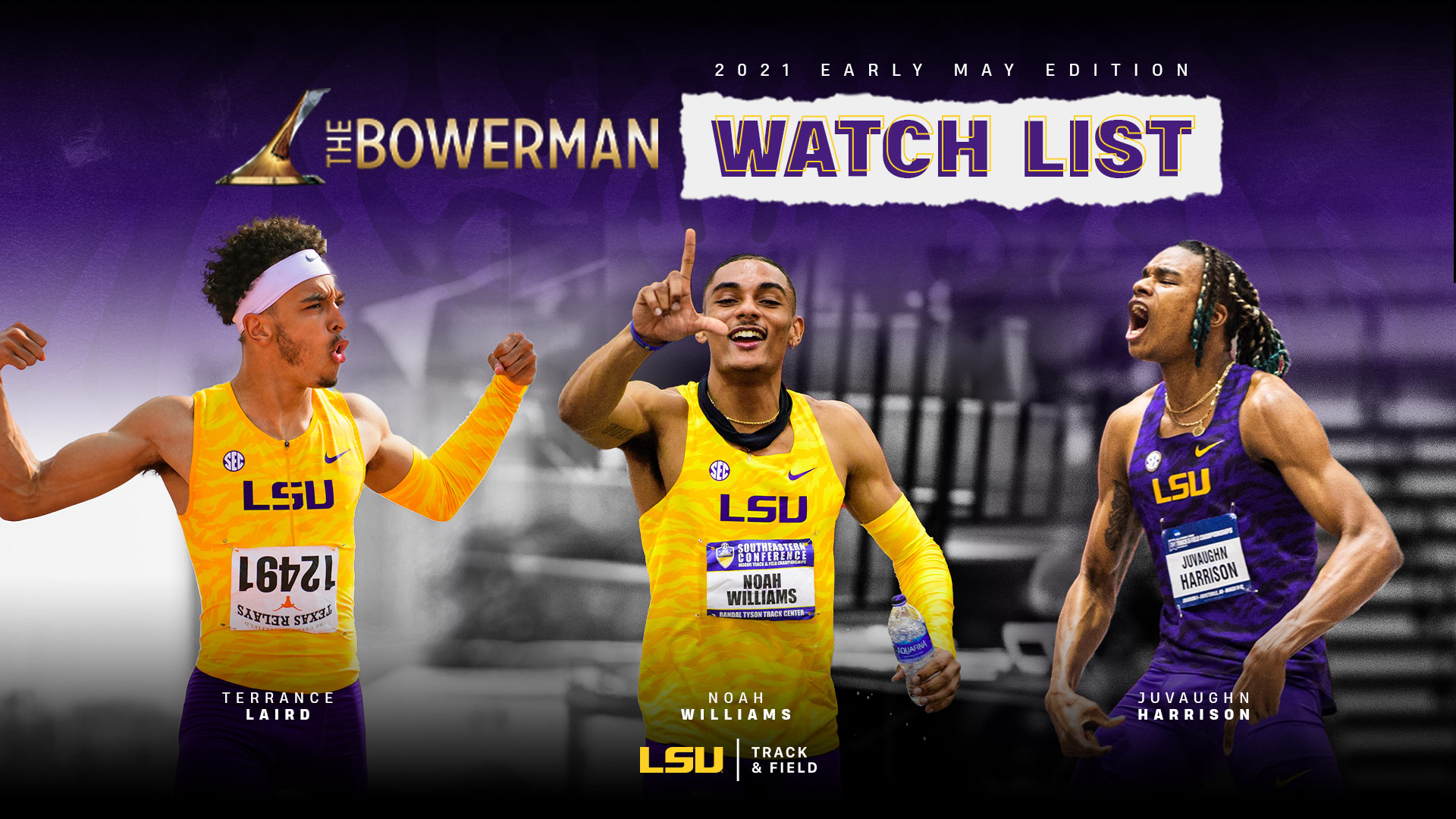 Harrison has continued his rise as the longest tenured member on the current watch list making his eighth appearance. The junior jumper from Huntsville, Ala., has taken over both NCAA leads in the long jump and high jump since the last watch list. Last weekend at the LSU Invitational, Harrison leaped up and over a career best height of 7′ 6.50″ (2.30 meters) in the high jump to break Tom Lange’s LSU school record from 1990. It ranks as the second best clearance in the high jump this outdoor season in the world and is the NCAA lead. A week prior at the LSU Alumni Gold (April 24), the ever-talented jumper soared out to a distance of 27′ 8.25″ (8.44 meters) in the long jump to claim the world and NCAA lead with the sixth best performance in collegiate history. The leap of 27′ 8.25″ was the longest by a collegian going all the way back to 2000.

Williams cemented his status as one of the elite 400 meter runners on the world circuit this season as he raced out to a world leading time of 44.30 seconds in the 400 meter dash at the LSU Alumni Gold on April 24. It was the sophomore’s season opener outdoor in the 400 meters and it made him the 12th fastest collegian outdoors over the distance of 400 meters; it also ranks No. 2 in school history. Williams has also been and incremental component of LSU’s 4×100 meter and 4×400 meter relay’s teams successes. He’s helped those relays to five wins this spring and they both rank No. 2 in the nation.

Laird has continued his speedy work on the track since the last watch list was released in mid April. His 19.81 outdoors in the 200 meters that he registered in late March at the Texas Relays is still the 2021 world lead in the event. He’s added in a personal best of 10.06 over the stretch in the 100 meters at the LSU Boots Garland Invitational (April 17), and he’s anchored the LSU 4×100 meter relay to four wins this season including a few walk downs. He also ran another sub 20 second 200 meter dash as he clocked a 19.82 but it came with a helping wind of 2. 4 meters per second. He is one of only two men this outdoor season to go sub 20 seconds in the 200 meters.

These three honorees plus Tonea Marshall on the women’s side makes LSU the only school in the nation with four members currently on The Bowerman Watch List. Each year The Bowerman is awarded to the top female and male collegiate track and field athlete each December.