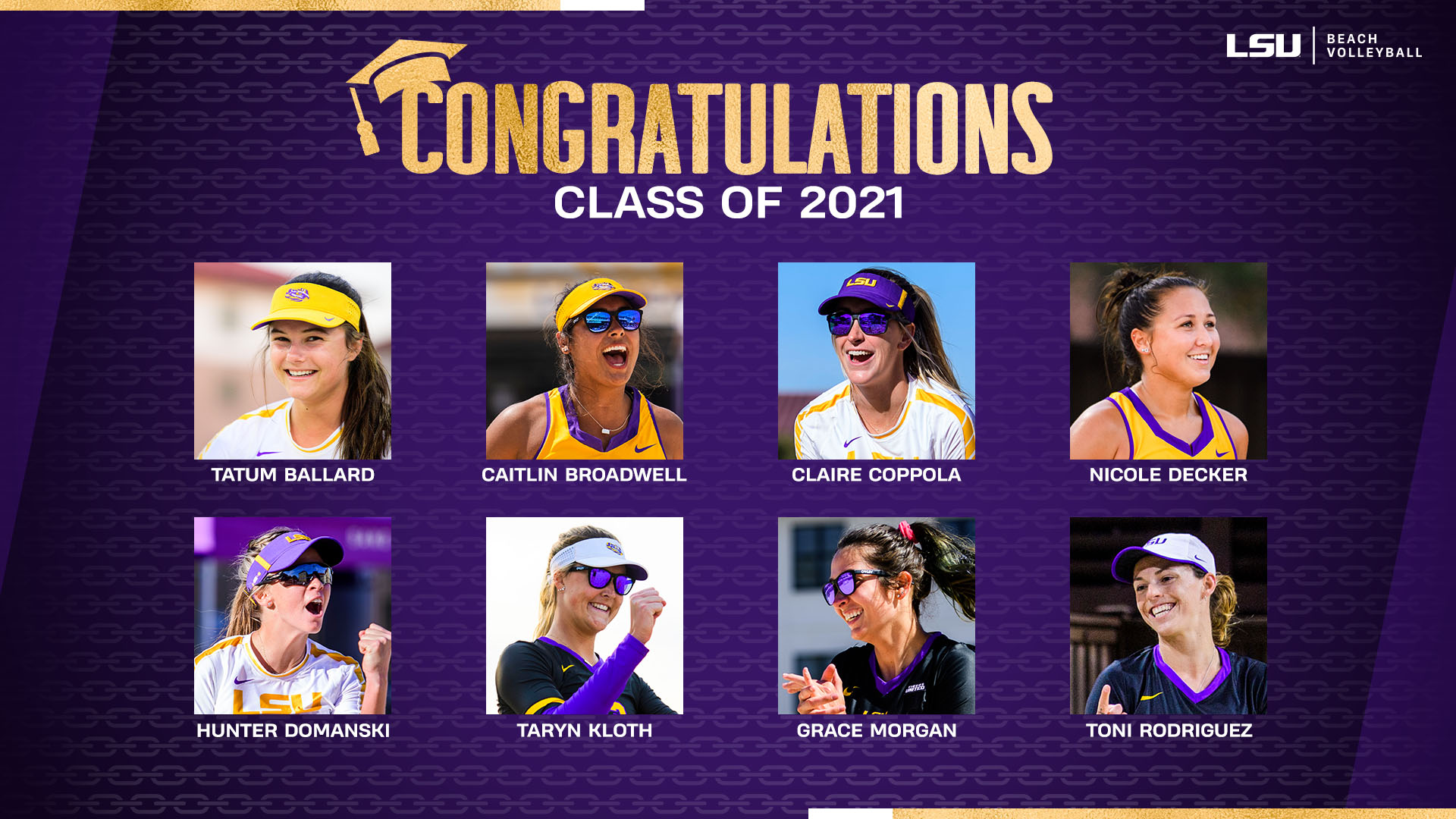 BATON ROUGE – Eight players from LSUs beach volleyball team are set to earn a degree from LSU either this weekend or over the Summer.

This class has helped lead the beach volleyball to great success. The Tigers have consistently been one of the nation’s top teams. They have also helped lead the beach program to the Tiger Cup twice which goes to the LSU team with the most production in the areas of competitive success, academic accomplishment and community service participation.

Ballard has been on the team since her freshman year in 2018. Despite seeing minimal time in the lineup throughout her career, Ballard has been an instrumental part in the culture Coach Russell Brock has been able to develop. Ballard has earned her Bachelor’s Degree in Business Administration and is set to begin working towards her Master’s in Finance at Vanderbilt this fall where she will sit for the CPA exam.

Broadwell was on the team during the 2019 season after joining the program as a graduate transfer from Colorado State Pueblo. She is earning her Master’s in Kinesiology, Pedagogy and Psychological Sciences. She is also working towards her Master’s in Counseling which she is scheduled to complete next May.

Kloth joined LSU as a graduate transfer from Creighton where she earned a degree in Finance. With Kristen Nuss, who graduated in December, she is part of the nation’s best pair on Court 1. Last May, Kloth earned her MBA from LSU with an emphasis in non-profit organizations and sports administration. This May she is earning her Master’s in Data Analytics.

Morgan joined the program in the fall as a graduate transfer from Rice. She is earning her Master’s in Information Systems and Decision Sciences.

Rodriguez, who is in her seventh year of eligibility is set to earn her third degree from LSU. She played indoor volleyball for the Tigers before joining the beach volleyball program. Rodriguez will leave LSU with a Bachelor’s degree in Kinesiology with a concentration in physical activity and health, a Master’s degree in the same thing and another Master’s Degree in Leadership and Human Resource Development. She has played a critical role for the Tigers since the 2019 season.

In the Summer, Coppola will also earn her third degree from LSU. She earned her Bachelor’s degree in Marketing and Professional Sales. Her first advanced degree was her MBA and now she is set to get a Master’s in Leadership and Human Resource Development. Coppola has been critical to LSU’s rise in beach volleyball since the 2017 season.

Domanski, who has the 10th most wins in program history, will graduate with a degree in Biochemistry and is set to attend law school at South Carolina.