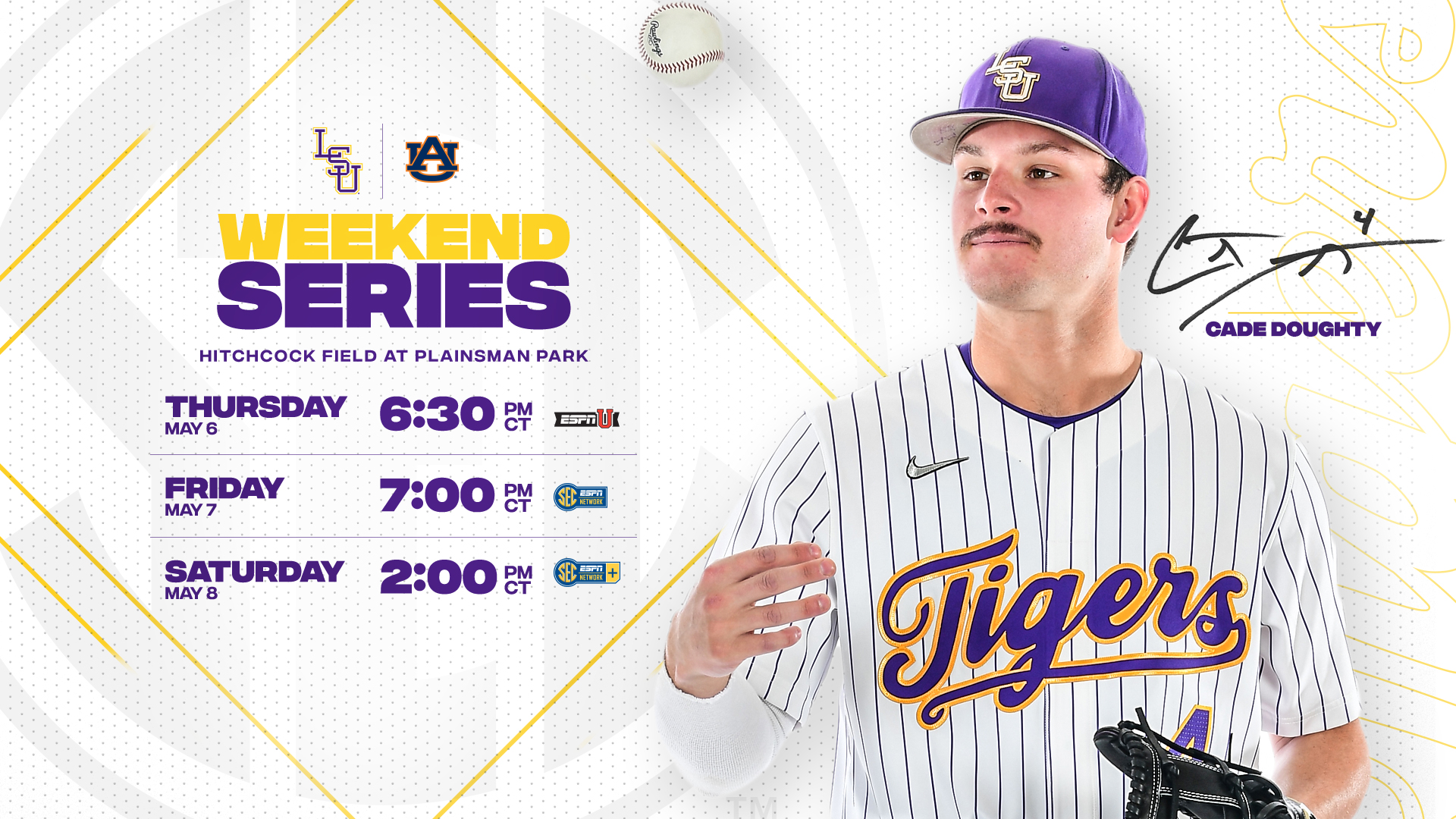 SERIES RECORD VS. AUBURN
LSU has a 106-75 advantage over Auburn in a series that began in 1907. LSU has won 18 of its last 23 games versus Auburn, including three wins in four games when the teams last met in 2019. LSU won two of three games over AU in the final regular-season weekend of 2019 before also posting a 4-3 walk-off win over Auburn in the third round of the 2019 SEC Tournament. LSU has captured six of the last seven and 14 of the last 21 SEC regular-season series between the clubs, dating back to 1999. LSU coach Paul Mainieri has a 28-13 career mark against Auburn.

QUOTING PAUL MAINIERI
“Auburn just won two out of three games at Georgia, and Georgia won two of three at Vanderbilt earlier this season; in other words, this is the SEC. Auburn’s record is not indicative of the caliber of their team. I’ve watched them play several times; they have a very good hitting team, and it’s going to be three big battles this weekend beginning on Thursday. We’ll be ready; we’re excited about going over there and competing against a very good ball club. We’ll take them one game at a time, and hopefully we can emerge victorious. We’re just going to leave it all out on the field and give it everything we’ve got, and let’s see what happens.”

ABOUT LSU
• LSU is No. 24 in the most recent official NCAA RPI rankings, and the Tigers are ranked No. 1 in strength of schedule, having played the most difficult schedule in the nation through the first 11 weeks of the season … LSU is No. 5 in the nation with 65 home runs in 44 games this season; the Tigers have already exceeded their total for the entire 2019 season … LSU hit 64 home runs in 66 games in 2019.
• Senior right-hander Ma’Khail Hilliard, making his first start in an SEC game since 2019, defeated top-ranked Arkansas last Saturday … Hilliard worked five innings and limited the Razorbacks to one run on two hits with three walks and three strikeouts … he fired 79 pitches, 51 for strikes, and improved his record to 4-0 this season … Hilliard also earned a win over Grambling State last Tuesday in a starting role, limiting GSU to no runs and one hit in three innings with no walks and five strikeouts … for the entire week, Hilliard was 2-0 with a 1.12 ERA in eight innings, allowing one run on three hits with three walks and eight strikeouts.
• Freshman right-hander Garrett Edwards shut out top-ranked Arkansas in three relief innings last Saturday, helping to boost LSU to a 5-4 victory … Edwards started the sixth inning in relief of Ma’Khail Hilliard and blanked the Razorbacks through the eighth inning, retiring nine of the 10  batters he faced … Edwards allowed just one hit with no walks and two strikeouts, throwing 43 pitches – 28 for strikes … Edwards also fired one scoreless inning last Tuesday versus Grambling State, allowing no hits and no walks with one strikeout.
• Junior centerfielder Giovanni DiGiacomo is batting .429 (6-for-14) in his last four games with two doubles, four RBI and four runs scored … he was 4-for-5 in Game 1 of last Saturday’s doubleheader versus No. 1 Arkansas with one double, two RBI and two runs scored.
• Freshman rightfielder Dylan Crews is batting .389 (7-for-18) in his last five games with one double, one homer, four RBI and four runs scored … his clutch two-out, RBI single in the second inning last Saturday versus Arkansas extended LSU’s lead to 4-0 in game the Tigers would win by a 5-4 margin.
• Sophomore third baseman Cade Doughty is batting .333 (6-for-18) in his last five games with one triple, one homer, three RBI and five runs scored … Doughty’s three-run homer in the first inning last Saturday versus Arkansas gave LSU a lead it would not relinquish in a 5-4 win.
• Freshman first baseman Tre’ Morgan is hitting .316 (6-for-19) in his last five games with two doubles and four runs scored.