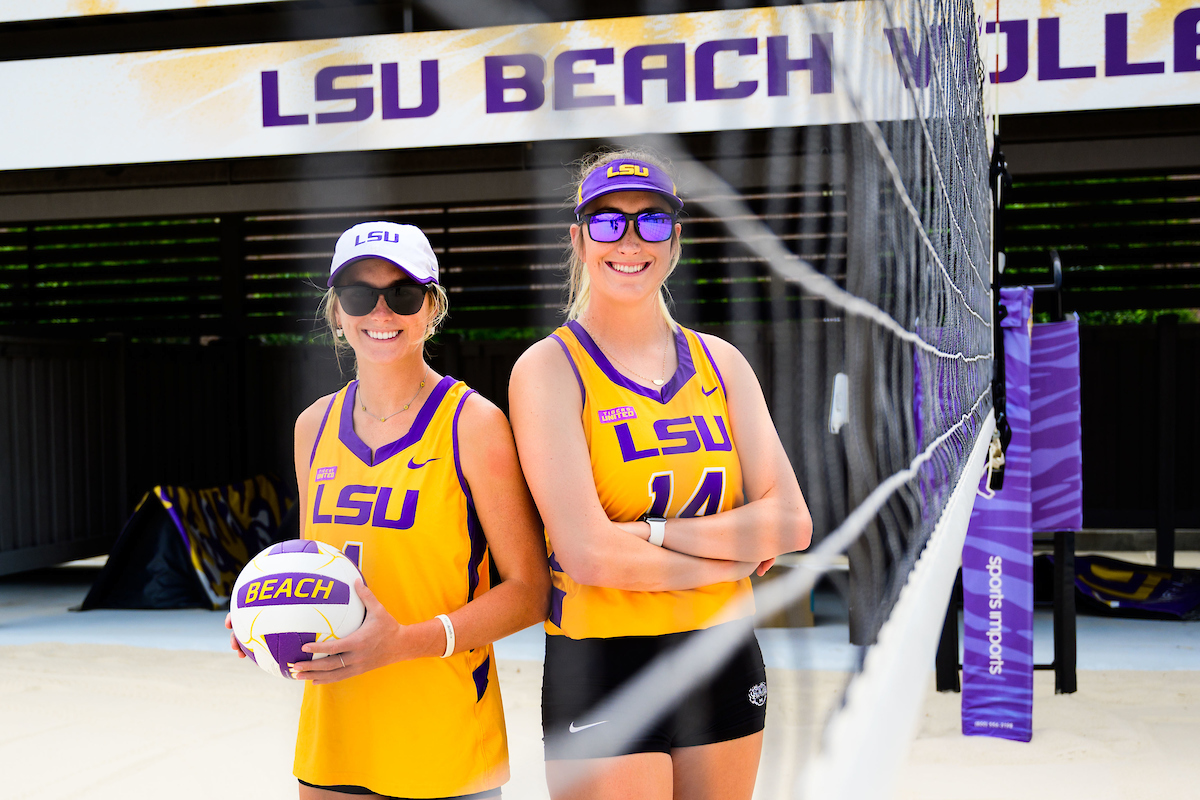 When Coach Russell Brock recruited Claire Coppola to play beach volleyball at LSU, all he had to sell her on was a vision.

The Tigers were not proven winners. LSU Beach Volleyball Stadium did not exist. The thought that LSU could become a powerhouse in beach volleyball was just a vision in his brain.

“Every year I am more and more impressed by the people around me and the legacy that Russell has created here,” Coppola said. “It’s something from day one that we’ve talked about. Whether it was actually achievable or not then, I’m not sure, but it’s been on our radar for five years.”

Coppola, the fourth winningest player in the history of college beach volleyball, is entering the NCAA Championship with Kelli Greene-Agnew on Court 2 for the Tigers and together the two Arizonans can help Brock’s vision of building a championship beach volleyball program in Baton Rouge turn into a reality.

Both Coppola and Greene-Agnew’s beach volleyball journey began at the same place, RPM Sand in Scottsdale, Arizona. Coppola was a few years older than Greene-Agnew, but Kelli always knew of and looked up to Claire.

Coppola’s career had a full circle moment earlier this season when the Tigers played in Los Angeles at USC. Coppola and Greene-Agnew squared off against Hailey Harward, Coppola’s partner when the pair won the first Arizona High School State Beach Championship.

The moment Coppola visited LSU was the time she knew this was the place for her.

“There is something so special about Baton Rouge,” Coppola explained, “and the culture that Russell has created here.”

It did not take long for Coppola to emerge as a star. During her freshman season, she went 27-7 and competed mainly on Court 1 with Kristen Nuss. They were both named All-Americans.  LSU got its first taste of team success that season too as the Tigers made their first ever trip to the NCAA Championship in Gulf Shores. The next season Coppola and Nuss went 31-8 and were named All-Americans once again.

As Coppola’s career was taking off in Baton Rouge, Greene-Agnew was growing a passion for the game. She first played beach volleyball in Arizona where some of the courts resemble dirt more than they do sand. Her indoor club team went out one day to play beach volleyball for a change of pace. Greene-Agnew fell in love with the beach version of the sport immediately.

“Beach volleyball has always had my heart,” said Greene-Agnew. “I love the sand. I love getting to dive around. It feels like I’m in a big sandbox.”

Greene-Agnew started to focus solely on beach volleyball which is where her path originally crossed with Coppola at RPM Sand. As her game continued to progress and after Coppola had begun her career at LSU, she was playing in tournaments all around, looking to get seen by college coaches.

Coach Brock was in California at a tournament Greene-Agnew was going to be playing. Coppola told him he needed to watch her court.

“She is actually one of the reasons why I’m here,” Greene-Agnew said of her current partner. “She helped me get recruited to LSU.”

Brock liked the speediness and instinctual nature in Greene-Agnew’s games. The two began conversing and the rest is history. Greene-Agnew began playing for the Tigers in the spring of 2019.

What was immediately apparent in the then-freshman’s game was the energy she brought to the court. She played and still plays with electricity. It’s evident when she’s chasing after balls to dig as a 5-9 defender and it’s evident when her pair gets a point and she celebrates for her partner’s success.

“She has this competitiveness that is really rare to find in people,” Coppola explained about Greene-Agnew. “I know that when we might be down in a tight set that she is not going to give up. She is going to claw, scratch and fight to do whatever she can to win the match for LSU.”

During her freshman season Greene-Agnew won 15 matches and was named to the CCSA All-Freshman team. That same season in 2019, Coppola played with Nuss again and they had the same type of results. They were 33-4 and All-Americans again.

Both Coppola and Greene-Agnew played big roles in the Tigers’ 2019 run which included the program’s first ever NCAA semifinal appearance.

Their 2020 seasons were both off a ferocious starts. Coppola and Nuss became just the third college beach pair to ever reach 100 wins together. Greene-Agnew competed on Court 4 with Taryn Kloth and they did not drop a single set throughout the season. LSU was on top of the college beach volleyball world as the nation’s top-ranked team when it abruptly ended because of the COVID-19 Pandemic.

Coppola’s season, and maybe her career, just ended seemingly out of nowhere. Despite having a job lined up selling medical devices for orthopedic sports surgeries, when Coppola found out the NCAA granted all spring-sport student-athletes an extra year of eligibility, she was all in. She could not fathom thinking of this week where she would be watching her teammates in Gulf Shores compete for a national championship without her.

As she was back in Arizona throughout the pandemic with her family, Nuss began playing Kloth as a way to stay active. Together they began winning tournaments against professional level competition, making a case to be LSU’s Court 1 pair during the 2021 season. Brock made that move – Kloth and Nuss are 32-0 this season – which led to Coppola and Greene-Agnew ultimately being paired together.

Whether you are talking about being an All-American like Coppola, having a perfect season like Greene-Agnew in 2020 or winning AVCA National Pair of the Week, something that both Coppola and Greene-Agnew have achieved in separate pairs, there is no denying that the talent for this pair is there.

It has been a year of growth for the two girls from Arizona. Playing in a new partnership, they have been forced out of their comfort zone and have had to find their footing. If they can put all the pieces together though, they have the ability to compete with anyone.

During the same California trip where Coppola played against her former high school partner at USC, the Tigers also had two matches against UCLA. Coppola and Greene-Agnew lost the first match against the Bruins in straight-sets on Court 2.

“We were clicking on all cylinders that game,” Coppola stated. “It was flowing like I have never felt before. We were just together and having fun.”

As they head into Gulf Shores they are looking for ways to channel that same energy as they prepare to face pairs from the nation’s top teams. Brock says they always play their best in the matches against the best competition. They have a 15-12 record this season together and now, with the right mentality, have the opportunity to put everything together and get it done for their team.

They both play with a passion that grows point-by-point. Every point they are going to lay it all on the line for the purple and gold. To get the job done this weekend would mean all their work of developing their partnership throughout the season has paid off.

This weekend is why Coppola came back. She came to LSU with no proof that it could be at the top. She is one of the reasons the Tigers are so close to the top, but there is one more thing to check off the list until her work here is truly done.

“That has been my goal for five years,” Coppola explained, “to win a national championship.”