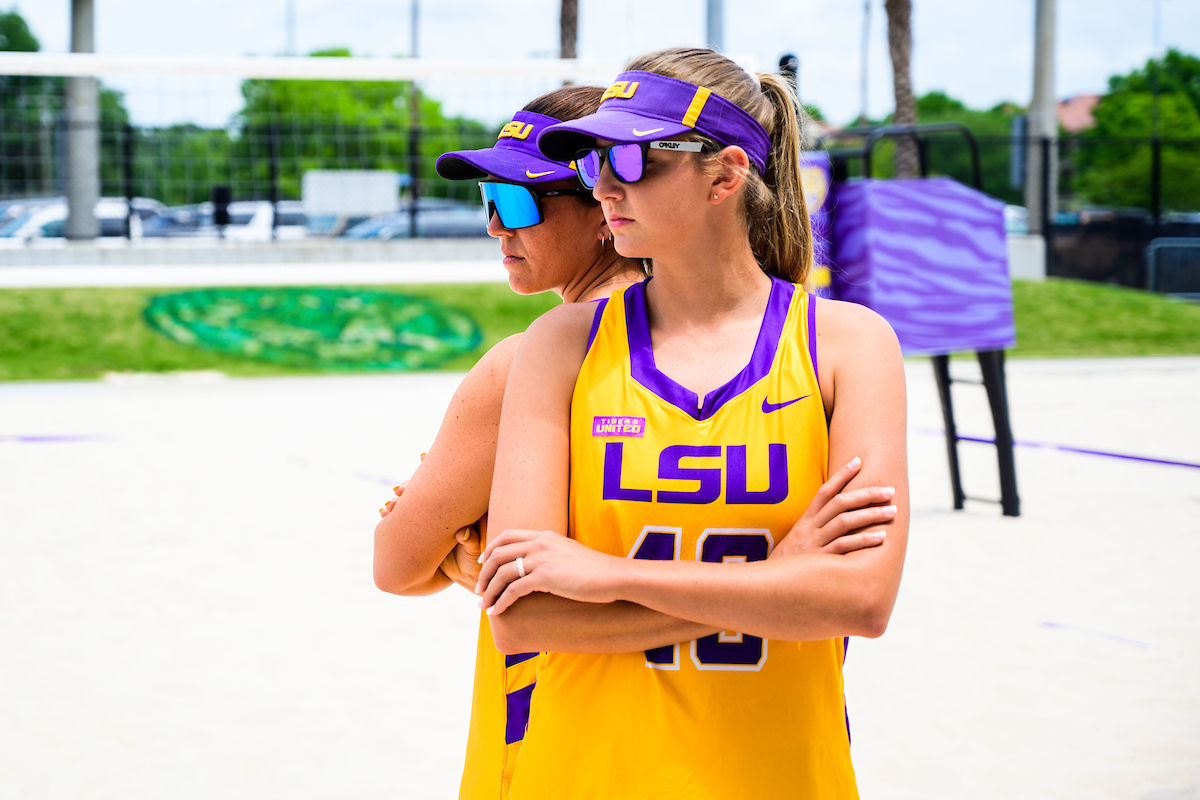 Kahlee York remembers the first time she played on the same court as Olivia Ordonez. It was in their early teen years and the future pair played against each other on opposite sides of the net.

Neither of them recall who won the match, but for two young Florida girls, they were growing a love for a game that one day would put them playing on the same side of the net at LSU.

When York committed to join the LSU Beach Volleyball program as a freshman for the 2018 season she knew Ordonez was on the team, one year ahead of her. York was going to be teammates with the tall girl that she remembered dominating juniors because of having freakish athletic ability. The two Florida girls were rocking purple and gold together.

When York began her freshman year, Ordonez had just finished up her first year in which she went 26-7 with win streaks of 10 and 16.

That season, Ordonez played a majority of her matches with Katie Lindelow who was a senior. With their success on Court 3, Lindelow and Ordonez helped lead LSU to its first-ever appearance at the NCAA Championship.

In an elimination match against Long Beach State at the tournament, the Tigers’ season came down to the result on Court 3 where Lindelow and Ordonez were playing. It took the Tigers’ duo three sets, but their win on Court 3 clinched LSU’s first NCAA Championship Tournament win ever.

Lindelow’s strong senior leadership helped instill the importance of trust within a partnership for Ordonez, a strong point of emphasis in all of her partnerships including her current one with York.

“I trust her with my life,” Ordonez explained. “Kahlee is one of the most trustworthy partners. Her undeniable talent, consistency, ball control, her volleyball skills, but also who she is off the court. I trust her with anything.”

As Ordonez’ career progressed, her wins continued to pile up no matter who she played with. She enters the NCAA Championship as the third winningest player in program history with 83 victories throughout her time with the Tigers.

In 2018, she won 20 total matches split amongst five different partners. Ordonez battled some adversity over the next two years though. She only won nine matches in 2019 and then was left out of the starting lineup going into the 2020 season.

A week and a half into the 2020 season she earned a spot back in the lineup on Court 5 playing with Hunter Domanski. They were 7-0 and had not dropped a set when the season was called short because of the pandemic.

Although the NCAA granted spring-sport student-athletes an extra year of eligibility, Ordonez initially decided it was time to move on with her life. She was getting married and began her career as a coach. As the fall progressed, Ordonez wrestled with her decision to return and after weeks of mulling it over, talking to the coaches and thinking about having one final opportunity to compete with her teammates, her decision was made.

“I feel like my life had really moved on in a phase so it was hard to come back,” Ordonez said. “But also, at the point I made the decision, things had fallen in place to where I knew there was more to be done. It wasn’t quite over.”

Aside from the value she brings on the court, Ordonez brings a calming influence to the locker room, something that was missing throughout the fall when she was coming to her decision.

“To have her back has been a key and pivotal piece to our ability to continue to push into places that maybe we couldn’t be without her,” Brock explained.

One of the players who helped lay the groundwork for LSU to become one of the best beach volleyball programs in the country knew there was more left to accomplish. Ordonez returned at the beginning of spring practice.

York’s career, up until this year, had not been quite as fruitful as Ordonez’. York has always been a player on the cusp of the lineup. She’s versatile in that throughout her career she has played in the lineup as both a blocker and a defender. She entered this season with 12 career victories, but she has always been able to embrace whatever role she has been given.

In the 2019 NCAA Championship that role was as a lineup alternate. As chance would have it, the player who wears No. 5 was needed on Court 5 in one of the biggest matches in program history.

Allison Coens had been Hunter Domanski’s partner on Court 5 for most of the season, but partway through the season Coens came down with an illness. She was able to enter back into the lineup at the NCAA Championship and her and Domanski pulled out a big three-set win over Stetson to send LSU to the NCAA semifinals for the first time in program history. Her stamina had not fully recovered though and Coens was going to be unable to go in an elimination match against USC where the winner would advance to the National Championship. York found out the evening before the match that she would play.

“I got the text and I think my heart just dropped,” York recalls. “I had no idea that was going to happen.”

After a conversation with teammate Katie Kampen and assistant coach Cati Leak, York had a sense of calmness wash over her like a wave. Domanski placed trust in York and together they were able to embrace the moment and win for their team. As beach volleyball works though, winning on one court does not ensure team success and the Tigers lost in the overall match to the Trojans, 3-2. Knowing that she was able to rise above in that moment of uncertainty though gives York confidence in any match she enters now.

“My game has only elevated since then,” said York. “I don’t think there’s anything that’s as pressure filled as I experienced that day.”

The 2020 season came and went with York seeing minimal time in the lineup. Once again she embraced her role and supported her teammates that were in the lineup. She stayed consistent and continued to become more aware of what she needs to do to maximize her potential. When a lineup spot was open heading into this season, her mentality and all of the work over the years she has put in would pay off.

York has always been one of the hardest working players on the team. She gives credit to her parents for instilling that mentality in her. Her family is full of successful athletes. Her mom was a gymnast and soccer player. Her dad played college basketball. One of her grandfathers played football at Marshall while the other played baseball and football at NC State and is a member of the school’s athletic hall of fame. Now it was Kahlee’s time to join her family lineage of athletic success.

With Ordonez having decided to return and York poised to earn a position in the lineup, the pairs on Courts 1-4 were pretty much locked. The two girls from Florida who competed against each other some years ago at a juniors event were going to be LSU’s pair on Court 5.

Their combined skills have allowed them to enter the NCAA Championship with an 18-7 record this year. Coach Brock calls Ordonez one of the best blockers the program has ever seen.

“She has a knack for getting blocks in big ways at crucial moments,” Brock said.

York is the consistent defender who makes the plays she should make which Brock considers a hallmark of a great defender. This season too she has shown the ability to have greater range and get to more balls that are on the edge of her span.

Their abilities and trust of each other can be described with one match and a simple phrase. They are one of just two pairs in the LSU lineup composed of two seniors and they are both playing for something bigger than themselves.

It was the second round of the CCSA Tournament just the other week and LSU was in a tight battle with TCU. The Tigers took Courts 1 and 4 while the Horned Frogs won Courts 2 and 3. Ordonez and York won the first set on Court 5, but fell in the second set. The match against TCU was coming down to the third set on their court.

They trailed 6-5 in that winner-take-all set. From that point forward though, Ordonez and York did not drop another point. They scored 10 in a row to propel LSU to victory.

Kahlee and Liv rattled off 10-straight points to propel to Tigers to the semi-finals of the CCSA Tournament! pic.twitter.com/KHANPqV657

At one point throughout the beginning of the run York looked at Ordonez and said, “Liv, senior night energy,” in reference to LSU’s 5-0 defeat of ULM on senior night where each pair played flawlessly because the team was playing for something bigger than themselves.

“It’s such a powerful mindset, I think,” York explained, “playing for something bigger than you. That energy that you get from it is what allowed us to play so confident and play together.”

It was an impressive run where Ordonez seemingly blocked every ball she contested at the net. Any ball Ordonez did not block, York had no issue getting to defend and they were able to score point-after-point-after-point en route to the win.

What allows Ordonez and York to be successful is the trust that they have built amongst each other both on and off the court. It’s something that is not just important to them as a pair, but the whole LSU team. One point here on one court and another point there on a different court could be the difference between a team win or a team loss.

“We’re going to Gulf Shores to play for each other,” York said. “And we’re going there to win a national championship. I think understanding that we’re able to and trusting in ourselves is going to be key.”