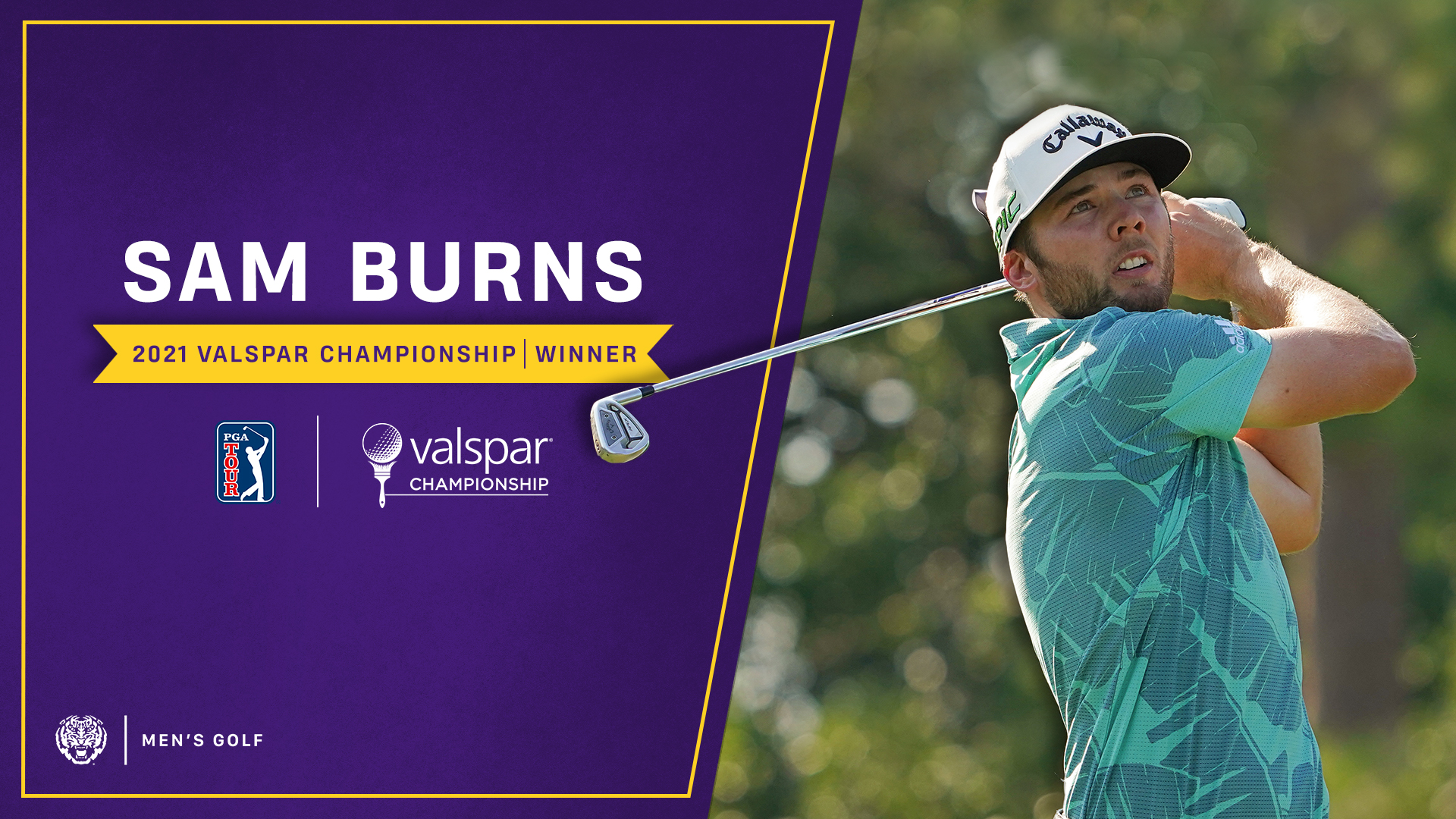 Palm Harbor, Fla. – The wait is over. Former LSU men’s golfer Sam Burns secured his first career PGA Tour event win on Sunday at the Valspar Championship by firing a 3-under 68 in the final round to finish three strokes ahead of Keegan Bradley, the runner up.

Proud of our guy! Congrats to @Samburns66 on his first PGA Tour title!#ForeverLSU

“I’ve worked so hard for this moment,” Burns said shortly after his win. “To have my family here, they’ve sacrificed so much. It’s really a dream come true. The moments from the past test you and you learn a lot from them. We just stuck to our process and played my game.”

Burns played exquisite golf in the final round and got things started on the right foot with birdies on his first two holes of the day. He went out in 2-under 34 and closed with a steady 1-under 34 for his 68.

Burns shared the 54 hole lead with Bradley after rounds of 67, 63, and 69. His 8-under 63 on Friday, which was the lowest round of the tournament, featured a perfect card with eight birdies and 10 pars. With the win, Burns will shoot way up the FedEx Cup standings. He entered the week ranked 47th and will be 14th after this weekend’s win.

This marks Burns’ fifth top 10 finish of the year in what has been his most successful year on the PGA Tour yet. Burns, the 2017 Division Jack Nicklaus National Player of the Year, was a two-time All American during his two years at LSU for the 2015-16 and 2016-17 seasons. His sophomore campaign saw him average an LSU scoring record of 70.05 en route to 14 top-10 finishes and four wins that season.

The win earns him PGA Tour exemption all the way through the 2022-23 PGA Tour season and he receives invites to the PGA Championship, The Masters, and The Players Championship.

Another birdie and @SamBurns66 leads by 4 with two to play. pic.twitter.com/BVJkvwjm9Z

Back-and-forth at the top of the leaderboard. ??@SamBurns66 gets back into the co-lead. pic.twitter.com/Nz6BOaN0CZ

Perfect read from 26 feet and @SamBurns66 retakes the lead. ?? pic.twitter.com/3cXDZCLo4E

He takes sole possession of the lead. pic.twitter.com/bOA8r4g7xb