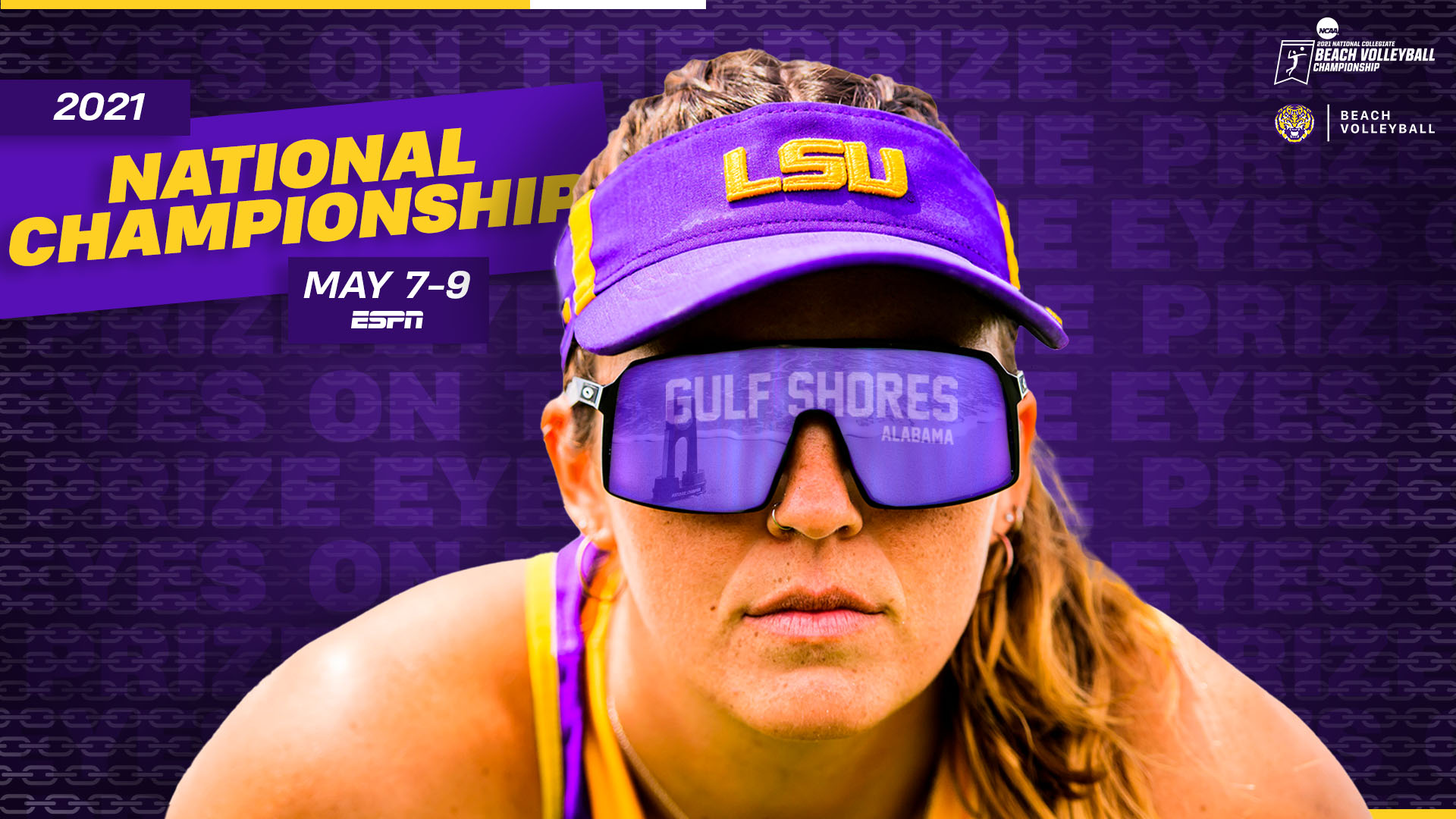 BATON ROUGE – The LSU Beach Volleyball team (25-7) heard its name called during Sunday’s selection show as the No. 4 seed for the NCAA Championship, set to begin on Friday in Gulf Shores, Alabama.

The NCAA Championship will take place from Friday, May 7 to Sunday, May 9. Every match of the double-elimination tournament which features the nation’s top-eight teams will air on the ESPNU (Friday) and ESPN2 (Saturday and Sunday). Every year both the East and West regions get three automatic bids and the two other spots are at-large bids that go to the two other top teams.

Attendance at this year’s NCAA Beach Championship is limited to family and friends where each time gets a limited allotment of tickets.

LSU will face No. 5 Loyola Marymount at 10 a.m. CT on Friday. The winner will face the winner of No. 1 UCLA vs. No. 8 TCU at 3 p.m. on Friday after the losers of the two matches  meet in an elimination match at 1 p.m.

The matches in Gulf Shores are played to the point where one team wins three courts. Once a team clinches the match with three courts, the match is ended. That means a match can finish 3-0 or 3-1 with the other courts going unfinished.

The Tigers have occupied a spot inside the Top-4 for the entire season. In fact, only four teams have been featured inside the top-four at all this season. No. 1 USC, No. 2 UCLA, No. 3 Florida State and No. 4 LSU have been the only teams inside the top-four, shuffling amongst those spots throughout the season.

LSU been waiting a long time to get the opportunity to compete for a national championship. When the 2020 season ended early because of the COVID-19 Pandemic LSU was on top of the college beach volleyball world as the No. 1 team in the country. With a senior-heavy roster, the future was uncertain, but the NCAA granted spring-sport student-athletes one extra year of eligibility.

Four of LSU’s six seniors from that roster – Claire Coppola, Taryn Kloth, Toni Rodriguez and Kristen Nuss – decided early on that they would return. The other two, Jess Lansman and Olivia Ordonez, both of whom were married last summer, took through the Fall semester to make their decision to return for one last push of what they originally came here to do.

One Goal
One Vision

We’re in this together ? pic.twitter.com/xlxxaYtzRw

LSU entered the 2021 season where it ended the 2020 season as the nation’s top ranked team. The Tigers have battled through ups and downs to set themselves up as real national title contenders.

All seven of LSU’s losses have come at the hands of the three other teams that have occupied the top-four throughout the whole season. The Tigers have battled tooth-and-nail with those four teams all season and will have the ability to avenge those losses in Gulf Shores and be the last team standing. Against anybody outside the top-four, LSU is 24-0.

In four matches against Florida State this season, LSU is yet to earn a victory. In a top-two matchup during the second week of the season, Florida State came to Baton Rouge to earn a 4-1 victory over LSU. The following week in Gulf Shores, on the same beach where the NCAA Championship will be held, the match was tied at two. LSU’s Ashlyn Rasnick-Pope and Toni Rodriguez led in the third set on Court 3, 13-9, but Florida State’s pair rattled off six points in a row to clinch it for the Seminoles. Last weekend at the CCSA Championship LSU fell to Florida State, 4-1, but three of the courts LSU dropped went to three sets. After coming through the loser’s bracket in the double-elimination event to make it to the championship match against FSU, LSU fell, 3-2. That match was about as close as a match could be and was decided by just a few points.

In a weekend trip to the West Coast, LSU dropped two matches to UCLA during a double-header. The final of the first match was 4-1 and the second match was 3-2. Just as the FSU matches, LSU was in a position on multiple courts to swing those matches over a few points here and there, but the Tigers were unable to close. Claire Coppola and Kelli Greene-Agnew came through on Court 2 though in the second match and showed their ability to win on Court 2 against an elite pair.

The following day against USC, LSU broke through to get a win. The Tigers defeated the Trojans in the first of two matches, 3-2. Taryn Kloth and Kristen Nuss earned the clinching Court with a three-set win on Court 1. That match was Nuss’ 124th career victory as she became college beach volleyball’s all-time winningest player. Her and Kloth are the nation’s top pair with a 32-0 record entering Gulf Shores. In the second match, USC edged LSU, 3-2. Rasnick-Pope and Rodriguez went 2-0 on Court 3 against USC on Gulf Shores, rebounding after two close losses against UCLA the day before.

Despite LSU’s undefeated success against all other teams, one other team gave the Tigers a good run for their money. That team is TCU who happens to be the third team from the East region that is headed to Gulf Shores. At the CCSA Tournament last week in the second round the Tigers and Horned Frogs were locked in a tight duel. LSU won Courts 1 and 4 whie TCU took 2 and 3. The match on Court 5 came down to a third set, winner-take-all. Olivia Ordonez and Kahlee York trailed 6-5, but rattled off 10 points in a row to send LSU to the semifinals. After the loss to FSU, LSU and TCU had a rematch for a chance to go to the championship match. On that day, the Horned Frogs were no match for the Tigers as LSU cruised to a 5-0 victory.

Since the Tigers returned from the CCSA Tournament, all five of LSU’s pairs have been working to clean up little things that can hopefully shift one point here and another point there that can ultimately be the difference maker in close matches on the sand.

This is the fourth time in a row LSU has made it to Gulf Shores where each year the nation’s top eight teams are invited to compete for a National Championship. LSU first made the tournament in 2017 then again in 2018. The last time the tournament was held was in 2019 when the Tigers made their first-ever appearance in the NCAA semifinals. LSU was on track to reach Gulf Shores in 2020 as the nation’s top-ranked team when the COVID-19 Pandemic ended the season prematurely.